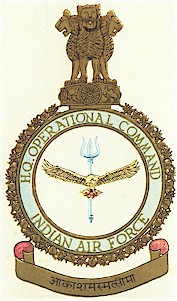 Western Command was raised as No.1 Operational Group on Independence 27 Sep 47. In 1949, It was redesignated as Operations Command. In 1962, with the raising of Central Air Command, Operations Command was renamed as Western Air Command. WAC is the most important of the five regional commands. It controls air operations north of Jaipur, including the capital and Punjab, from Kashmir south to Rajasthan. There is an Air Operations Group at the Udhampur AFB, formed in 1982, is dedicated to the defence of Jammu & Kashmir and also includes Ladakh. There is an advanced headquarters located near the Army’s Western Command at Chandigarh.