The Royal Indian Air Force (RIAF) went into action shortly after Independence in 1947. In a bid to gain control of the erstwhile principality of Jammu & Kashmir, Pathan tribesmen, armed and aided by Pakistan poured into Kashmir on 20th October 1947. They went into a frenzy, killing, ransacking and pillaging as they advanced to Srinagar, the capital of Jammu & Kashmir. Unable to turn the tide of the conflict the Maharajah, who until then had vacillated over joining either India or Pakistan, appealed to the Indian Government for assistance.

The Government of India (GoI) made its assistance conditional upon Kashmir’s accession to India. Within hours of his signing the Instrument of Accession, the first Indian troops, commanded by Colonel (later Field Marshal) Sam Manekshaw, were airlifted to Srinagar in Dakotas from No.12 Squadron. No.12 Sqn’s Dakotas were eventually joined by around 100 Dakotas from private airlines. It was a remarkable achievement at such a short notice.

Taking off from Palam the first Indian troops were landed at Srinagar airfield at 0930 hrs on October 27th. At that time it wasn’t even known whether the airfield has fallen to the tribesmen or not, but the risk was taken. On the first day, RIAF and civilian Dakotas had airlifted the 1st Battalion of the Sikh Regiment and thus secured the airfield’s safety. 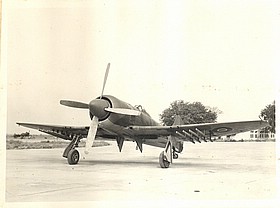 RIAF Tempests being loaded with ordnance at the Ambala AFB

On 28th October, Tempests from Ambala attacked Enemy positions at Patan. Two days later the first Spitfires were flown to Srinagar, joining the Harvards which were already flown there. Fuel to keep these aircraft was hard to come by, but the Army developed ingenious methods to provide the necessary fuel. As soon as any Dakota landed, a jeep with a drum in its back would approach the aircraft, and with the pilots consent, the men would siphon off any extra amount of fuel that the captain of the aircraft would spare.

The fuel thus collected kept the Spitfires flying later for the crucial battles of Badgam and Shalateng. On November 3rd, the decisive battle of Badgam was fought in the vicinity of Srinagar airfield where the enemy launched a surprise attack. It was in this battle that Major Somnath Sharma was awarded the Param Vir Chakra posthumously.

Two Spitfires came to the aid of the Army by strafing the enemy attackers. The combined Indian Army-Air Force onslaught beat back the attack. Four days later on November 7th, The Battle of Shalateng took place which routed the enemy. The tribesmen kept retreating till Uri. Tempests of No.7 Squadron played an important part. According to Brigadier (later Lieutenant General) L.P. Sen, bodies were counted between Srinagar and Baramula, almost all due to air action. 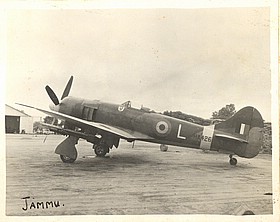 A rare photo of an RIAF Tempest of No.7 Squadron, by now earing the Saffron-White-Green roundels.

Later on, RIAF Tempests provided much needed air support to the Army in the area of the Uri bowl where the fighting had stabilized. The Tempests strafed and rocketed enemy concentrations at Kot, helped in the advance to Tithwal, dropped vital ammunition and even food supplies to the beleaguered Skardu garrison. They destroyed enemy field guns at Poonch, and in a daring and spectacular low level air raid, destroyed the bridges over the Domel and Kishenganga rivers in the face of heavy ack-ack fire.

The lone transport Squadron was not left behind. No.12, in the course of its regular casualty evacuation and transport duties, airlifted 25 pounder field guns to Poonch. It also flew the first Indian Army troops to Leh, which was the first aircraft to land at Leh, and even bombing sorties in support of the army with the bombs being rolled out of the cargo bay by the aircrew.

The main driving force behind the squadron was Air Commodore Mehar Singh, head of the operational group in Jammu & Kashmir. He himself led many of the pioneering flights including the ones to Leh and Poonch. For leading and guiding the air operations in Jammu & Kashmir, he received the Maha Vir Chakra. Wing Commander K.L. Bhatia, C.O. of No.12 Squadron, got the Vir Chakra as did many pilots of the squadron.

The fighting ended on 31 December 1948, the cease-fire bought about by UN Mediation. The RIAF acquitted itself well earning 4 MVC’s and 23 VrC’s. Not much is known about its losses but at least a couple of fighters were lost to ground fire. One fighter, a Tempest, was lost in the Tithwal area due to ack-ack fire. The pilot, Flying Officer U.G. Wright baled out and had a harrowing experience during his parachute descent. He was shot at by rifles, light-machine guns and even 3 inch mortars. But he made it back to our lines.

Another Pilot, Flt. Lt. Ulrich Anthony D’Cruz was shot down early in the war on 1st Dec 47. After bailing out, he was captured by the tribesmen, beaten up and abused. After repatriation, he was awarded the Kirti Chakra for his conduct during captivity.

One RIAF Dakota went missing on the second day of the conflict and nothing was heard about the pilot. Flt. Lt. C.J. Mendoza and the 20 passengers were missing, till almost 30 years later, when the wreckage was stumbled upon in 1980 and the remains of the crew members were laid to rest.

No air-to-air encounters took place between the Royal Indian Air Force and the Royal Pakistan Air Force, but on one occasion a RPAF DC-3 Dakota was intercepted by two RIAF Tempests flown by Squadron Leader Masallamani and Flight Lieutenant Dogra over Chilas. By the time the RIAF Tempests gave warnings and fired shots, the RPAF DC-3 Dakota slipped back into Pakistani airspace. The RPAF pilot got a Sitara-e-Juraat for the escape.

Meanwhile down south, the Hyderabad police action was in progress. Here too the RIAF lent a hand to the Army. Tempests and Dakotas saw much action, strafing, bombing and dropping leaflets against the Nizam’s forces. However the scale of operations is minuscule compared to the Jammu & Kashmir operations. The end of the hostilities gave the RIAF some breathing space.

It went ahead with its re-equipment plans and to build up as a 20 squadron force. About a 100 Spitfires and Tempests were acquired from Britain. To build up a bomber complement, the RIAF salvaged about 40 odd B-24 Liberator bombers from the ex-USAAF scrap-yard at Kanpur and put these relics into the air. Initially, Lancaster bombers were offered by Britain. However it was decided to acquire more fighters with the same money and build up the required bomber force with the salvaged aircraft.