The culture of war comics in India is pretty much still in its infancy. Right from the sixties, the primary source of war comics for the indian market came from British publishers like DC Commando, War Picture Library, Battle Picture Library etc. These were household names that could get their comics marketed to Indian households from the 60s, 70s 80s. This very reviewer grew up on steady access to the above comics in the 80s that successfully nurtured his current interest areas.

In the eighties, both Indrajal comics and Amar Chitra Katha bought out one-off issues on war comics touching upon the invasion of Kashmir in 1947 and other events. But these remained one-offs.  So even today. Indians are hardpressed to find war comics published by Indian publishing houses on Indian conflicts. The sole exception to this is AAN Comics by Rishi Kumar.

However sensing war stories that existed beyond the PVC awardees, Rishi started his own publishing company – AAN Comics and has since then done more than fifty individual titles. (Only two of these are  IAF Related ones – Suhas Biswas, Dara Chinoy) . One of the facts that I liked about Rishi’s work is the attention to detail in how he draws out his illustrations. He studies the aircraft and the equipment that he illustrates to try and make sure that data is replicated correctly in the drawings. To give an example, this reviewer never realized the De Havilland Devon’s undercarriage retracted flat into the wings and not into the engine nacelles till he spotted that detail in the comic about Suhas Biswas

On the occasion of the 20th  anniversary of the Kargil War, AAN Comics brought out this 112-page, full-colour magnum opus graphic book, titled “Where Eagles Dared : Operation Safed Sagar”.

And I say “magnum opus” in terms of the scope of comics / graphic books in India. Usually these last only for 30 or at the most 50 pages and in single-tone print. The current book being reviewed is of full scape size and nearly 100 pages and in full colour.

As the title lays it out, this covers the Indian Air Force operations during the 1999 Kargil war and pretty much stays true to the events as reported during those days. Page after page is illustrated with stories that strike memories – the Mi-17 lost over Tololing, the loss of Ajay Ahuja, the IAF’s quick thinking operations on using MiG-25s and Mirage 2000s.. Every page took me back to the news coverage and the stories that we used to track back in 1999.

The comic book / graphic book goes through to the Stories of the time and pretty much covers it into end and it’s a good start for anyone trying to get up to speed on this smaller air conflict.  Of course, this is a graphic book (I hate to call it a novel as it relates to real events and real people) and the accuracy of some of the facts should be evaluated within the confines of the format – and in that this does an impressive job. 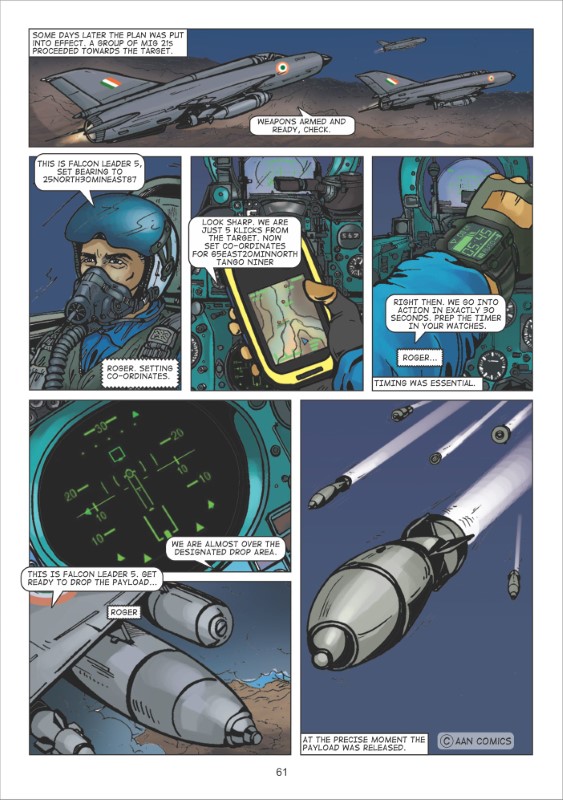 Some of that detail is missing perhaps due to the full-colour format of this particular comic. The characters in this particular comic are all real. There is no fictitious persona doing heroic work. These are the people who are actually there and who actually fought it to the best they could.

The graphic book spans 100 pages and at an average of 6 panels per page, 600 panels approximately – compared to 120 for a typical “Commando Comic”.

Reading through the book, The reviewer is struck by a thought from the childhood experience. In the case of traditional war comics like Commando comics and War Picture Libraries, the storylines take full liberty in coming up with fictitious character storylines.  There was no boundary to what the characters could do in that context, perhaps that was what triggers the imagination in young minds.

For Rishi’s work, he is constrained by history. Thus for this Kargil work, there is no fictional hero that spans the entire book. There is no central protagonist that a reader will follow the comic from beginning to end.  A history like this is always stitching of several smaller episodes that form the complete history of that air war.  Thus, this book, the comic book or graphic book as you may prefer, is unable to deliver the childhood experience of following one single hero or group of heroes through a storyline.

Unfortunately, that is a compromise the storyteller has to make when taking up an assignment of this magnitude. I myself am conflicted between telling stories the way they happened versus the entertainment value offered by the fictional material offered by traditional war comic publishers.

That being said, this work on Kargil conflict needs to be archived as a ‘history’ work. There are very few worthwhile comic books bought out by Indian publishers and illustrators and Rishi’s AAN Comics is the only consistent player.

I have no hesitation in recommending this book whether to parents of young kids or to collectors of history books. This caters to both. Reasonably priced at Rs 600, this can be purchased directly from the AAN Comics website at https://www.aancomics.com/