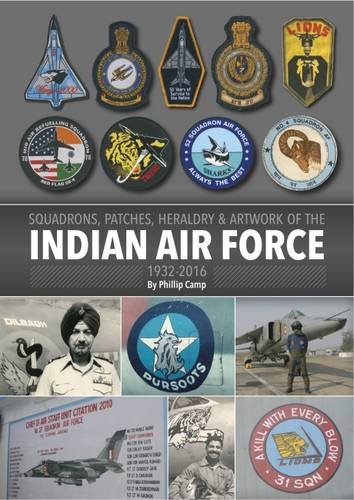 Purchase on Amazon (US) | Paypal

The Indian Air Force (IAF) holds a special place in my heart since I grew up an IAF “Air Force brat”. I have almost all the books published on the IAF that I can find. I had to pick up Phillip Camp’s book because he has been associated with the IAF for over two decades and as a UK national has had unprecedented access to the IAF. He has published countless articles and photographs of the IAF – even using a photograph from my family collection for an article on Indian Air Force Dakotas. The man has IAF street cred!

Truth be told, I am not that much into patches and heraldry, preferring to delve more into operations and aircraft. I don’t remember my father wearing more than one patch (usually a squadron patch) on his flight suit. in fact it was dangerous to wear too many in the aircrew room because of the ribbing one would receive. I asked some current IAF pilots and that seems still be the case.

Going through this book changed my mind – there is so much history and personality associated with patch. I wished I had saved the patches that were discarded by my father – there would have been 11 Squadron, 10 Squadron, FIS (Flight Instructors School) , AFFC (Air Force Flying College), TTW (Transport Training Wing), 43 Squadron and 6 Squadron patches from the late Fifties to the Eighties. What stories the patches would have told – perhaps of early morning takeoffs while living in tents, flying over the Himalayas or flying low over the beaches of the Malabar coast.

This is the story of the Indian Air Force told through patches. It is a human story (I recognized a lot of “uncles” and friends in the photographs) as much as it is about machines and organizations. The spirit of the people in each era is captured in the photographs and in some cases in the text. There a number of photographs that I hadn’t seen before – which is saying a lot! These include ones that weren’t taken by Phillip himself (though there are a lot of those throughout the book). The photos go from black and white to ever increasing color clarity, and capture the eras changing. The uniforms that the patches go on also change form, but the string of history running through each unit is apparent.

Every unit in the IAF is covered including the un-numbered units such as the FIS ,TTW (now called Fixed Wing Training Facility), ASTE (Aircraft Systems & Testing Establishment), Surya Kirans Aerobatic Team, and TACDE (Tactics and Air Combat Defence Establishment). Every squadron and every helicopter unit is covered of course. Air Force associated organizations such as HAL, DRDO and NAL are also covered.

The production quality is excellent, though I would have preferred a larger format if for nothing else but my aging eyes! The photographs and text are impeccable. This is a reference I will come back to again and again. Highly recommended for anyone who is an aviation enthusiast and a must have for IAF afficianados.

This unique book is a labour of love for Phillip Camp who has spent more than two decades covering the Indian Air Force and its activities as an Aviation writer. Phillip had collected thousands of patches over the years and it is his passion for them that resulted in this book.  It is my personal opinion that the book excels when the lesser known units come into focus, especially the “no-number” Instititons and units.  The production quality is top notch, the only complaint would be the relative small size of the page and print. Ofcourse a larger book would have been more expensive in terms of both production as well as shipping costs.  Another benefit of this effort is that the discerning reader has one single reference book that lays out the potted history of most of the IAF’s flying units.