“What flight-levels are we flying outbound, inbound” asked Victor Two.

This brought me back to the present. I now placed the target outline plan on the black-board showing the Peshawar runway and, in relation to its center point, the specific targets.

“We will pre-set our bomb-sights according to the figures given in your flight plans in relation to the center point…… here,” I indicated the center point with a pointer, “and off-set it by the direction and distance of your specific target which will be as follows:

“Victor Eight will take the Control Tower which is at right angles to the right approximately 1000 yards from the center.”

I was now allocating the specific targets to the crews and watched them noting as I kept on indicating their locations on the chart before me.

“The fuel-dump near the southern end of the airstrip is for Victor Seven; the bomb-dump directly 1000 yards on the opposite side of the runway from the flying control will be hit by Victor Six; the Officers Mess….here….will be taken up by Victors Four and Five; and the PAF HQs…here….for Victors Two, Three, and self……”.

“Are the targets clear?” There was a general nod of approval all round.

“The tactics being used do not guarantee absolute accuracy. Your endeavor should be to hit the targets and areas given to you. Those carrying 4000-pounders have a fuse set for above ground level explosion at 100 feet. So, even hitting in the general area is likely to cause immense damage to life and property.” This concession came as a relief to most.

“With fuel limitations there is little leeway for deceptive routing but let them think we are going for Sargodha or Mianwali once again.”

“After take-off, turn right, heading 302 degrees; height 500 feet above ground level, I repeat, 500 feet.” I had now started explaining the route and heights and the pattern of attack as had been planned at Op HQ. When they were about to take notes I had interrupted them and told them that all these details were on the flight plan given to each of them with the timings and turning points and that the fuel graph had also been drawn on the flight plan.

I continued with a pointer on the map to assist me indicate the various positions:

“When “Alpha” is left astern, and before crossing the border, drop down to 100 feet, I repeat, 100 feet—no higher, come what may. From now on keep a good look out for high-tension wires. We will enter enemy territory at a point….here….on our way to Wazirabad. At Wazirabad alter course to 265 and head for Khushab, northeast of Sargodha…here; at Khushab alter heading 356 and hit this….here….bend of River Indus west of Cambellpore. From now on, strict continuous “contact” flying up to target. Follow the river in the East-West direction and fly on heading of 270 until you hit the Kohat-Peshawar road going North-South; from here follow the road North and increase to max speed. You will hit smack on the southern dumbbell of the 18-36 runway of Peshawar. Around the time when Victor One will hit the road, we should all be able to monitor Tango-India’s instructions about the location of the two pink and green TI bombs in relation to the center point of the airfield. If necessary, offset your bomb-sights again to allow for that error and aim for the TI bombs. Tango-India’s RT call will be the first silence break.”

Letting the information sink in, I paused and then asked, “Are there any questions or doubts on the routing?” None! So far, so good!

Then I commenced the attack pattern.

“One minute before TOT, a steep pull up to 4,000 feet and level. Weather is going to be clear; the moon will be at its best angle to enable us to see everything clearly. Visually, aim at the TI bombs and hope that your babies hit the correct spot. You will get only one single pass; so, make the best of it. Whether your aim is as accurate, as you may desire it to be or not, you have no choice—just drop your bombs, you don’t have the second round luxury—and that is an order….Having become 8,000 pounds lighter, the Canberra will become more maneuverable.”

“The next step………get out like hell………and do not forget the drill. After ‘bombs gone’, close bomb doors; heading 075 degrees, towards Muzaffarabad and keep climbing to 40,000 feet. From Muzaffarabad, head 110 to “Sierra”. Over “Sierra” turn right and head for “Charlie” over the Banihal Pass. If everything goes according to plan, and we hope and pray it does, each one of us should be over “Charlie” with enough fuel for 10 minutes—you have to land at one go, no second round. Any questions?”

“What if we have an emergency on return, or “Charlie” cannot accept us? Can we land at “Sierra”?” This was Victor Three. An excellent question, which had been missed by me!

“Good question. “Sierra” is out. They will be off the air and no one is being told of our being in that area. However, “Alpha,” as always, for all night bomber operations, will be keeping a watch and awaiting any emergency calls and they will have the electric flare paths ready for you in no time if you decide to land there. As for “Charlie” not accepting you, the only alternative is “Able.” They will be ready at all times for our return as the standby airfield. If for any reason you find that you cannot make any of these airfields either because of fuel shortage or any other emergency—bail out. Any more questions?”

“If there are no more questions let’s set our watches with mine.” On my signal, everyone set his watch to a “zero” time. The hands of the watch had crossed a day—it was September 14; the ill-omen, if any, of the 13th had gone. “Now let us proceed to our aircraft; remember do not speak of the target until inside your aircraft……..Good Luck, God Bless and Happy Landings.”

From then on each crew was on his own. 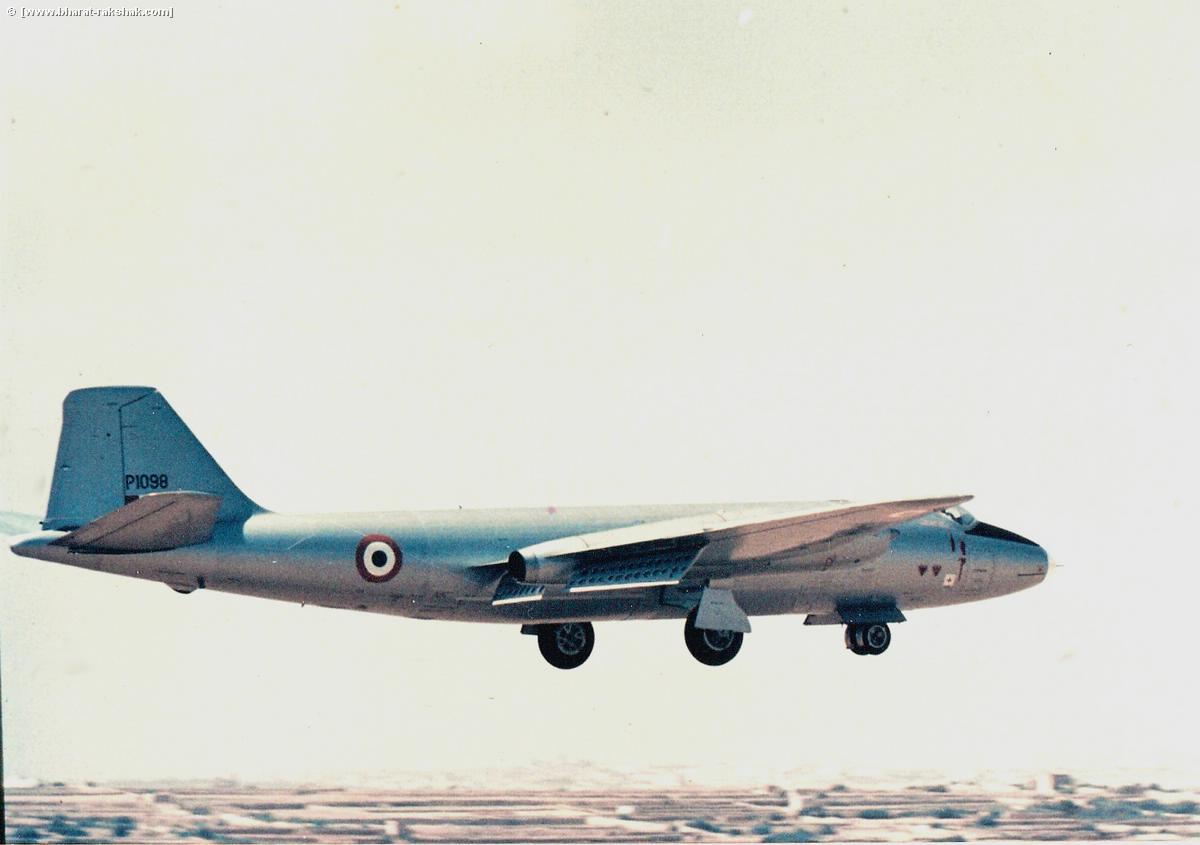 “Tango-India” gave his signal for rolling. Victor One, that was we, started up and rolled to the take-off point in line with the right wing-tip of crashed “Tenth”.

“Thirty seconds to roll”, concentrating on my watch, I called out to the pilot, ‘Boss’ Varma, on the inter-com; and, sitting on the brakes, he pushed the throttles forward till the two engines were roaring like thunder, breaking the eerie silence with its rumbling in the quite dark night for miles, and the aircraft shuddered and quivered to go; I continued, “twenty, ten, 9, 8, 7, 6, 5, 4, 3, 2, 1…now.”

On the dot, at 0020 hours the pilot released the brakes and the aircraft tore through the darkness gobbling yards of the runway in its path, with the pilot watching and calling up the speed as the speedometer indicator inched forward. As it came to the “unstick” speed, he gently pulled back on the stick, and steadily the nose wheel rose and then the aircraft lifted itself off the ground. In seconds we were at 500′ and level. We were now the masters of the silent sky looking forward to a successful end of the mission to be endorsed in the authorization book “DCO” [Duty Carried Out]. Both of us were now quietly absorbed in a mental rehearsal of what was ahead and so thoroughly planned. But not forgetting that, in heat of battle, the most well-planned, well-prepared and well-rehearsed plans do go awry.

“We are crossing abeam Alpha,” I informed the pilot, “drop down to one hundred feet. Recheck radio altimeter.” Slowly, he eased the aircraft down the 400′ glide.

“We should be crossing the border about now,” I said a little later.

Requesting the pilot to meticulously maintain speed, direction and height, I concentrated on ‘contact’ flying. It is a wonder for those not used to this type of flying as to how one can see the rail roads (the shiny metal lines), rivers, canals, roads, and high tension electric poles and lines. But here is where the starlight and moonlight are the greatest aids to a night interdictor crew and we make full use of them. After all, since 1957 we were being trained for such an occasion which came in 1965, and may not have come at all!! As I saw the Pakistan territory passing under us and awaited the various check and turning points, my mind again went back to the day’s happenings.

Having got one hour for my planning, both the pilot and myself started working on the various graphs and charts on the aircraft performance, the maximum distance, with every ounce of gasoline that we could cover with the loads. After starting with a low-low [going to and from target at low level] profile, even if done straight out and back from the nearest airfield available along the border, we attempted various other profiles—low-medium; low-high—taking off from different bases. Subsequently, with very little diversionary routing, to confuse the enemy visual reporters on the ground or their radar, if any, on the route, we chose the profile of low-high by using “Charlie” as launching base—flying as low as possible to the target, and as high as possible back.

“Are you blokes ready”, was the call of Bops.

“Yes, Sir”, answered the pilot, as I collected my papers together. Bops rushed off to inform the CAS and AOC-in-C, and shortly all had reassembled. I have never had such experience before, where, discarding a plan prepared by the high-ups, I would have to “sell” our plan to them! But then, I was also confident that our plan was viable, pragmatic and born out of actual experience, if not in the battlefield, at least, under similarly simulated conditions in the hills and mountains.

“Sir”, I started, facing the AOC-in-C and the CAS, “we plan that instead of our parent base, we will launch our attack from ‘Charlie’. We will take-off past midnight, fly 500′ up to the Pakistan border, and thereafter at 100′, pulling up to 4,000′, for our bombing run over target. This height is based on the intelligence reports given by the CIO that the anti-aircraft guns at the target cannot hit at that height. After a single pass, we leave the target area climbing to 40,000′ and return to ‘Charlie’ via “Sierra”. From information available, we are confident that Pak radar will not be able to detect us until we reach the target.”

Without giving a break for questions, I launched into the routing of the flight, and ended on a triumphant note saying: “We feel that this will be the biggest surprise to the enemy and a success to us.”

“With how much fuel will you make back to “Charlie”?” that was the Bops, not to be left out.

“Ten minutes, if we descend to landing height and more if we continue to remain at 40,000′ over “Charlie”, in case of any emergency,” said I.

“Yes, it is marginal, but it is better being with it near home, then to be shot out of the sky by the Pak Starfighters under the earlier plan….Sir,” I retorted back, and could sense the suppressed smiles of the ‘brass’. I knew then that our plan was sold.