Precy D’Costa was ten months old when the tragedy struck her family. Her father, an Aviation Radio Officer, A M Da’Costa, happened to be on the ill-fated flight of the Beech 18  carrying the then Gujarat Chief Minister Shri Balwant Rai Mehta on 19th September 1965. The aircraft on a flight in remote Bhuj was intercepted by a PAF F-86 Sabre and was shot down with the loss of all lives. For many years she was not aware of the circumstances. She narrates her journey to find closure, and her visit to the crash site, 56 years later.

On 19th September 1965  an American made F-86 Sabre jet fighter belonging to the Pakistan Air Force shot down an Indian registered civilian Beechcraft 18 twin engine light aircraft. The aircraft was on a flight close to the border when it was intercepted and shot down. The aircraft went down with no survivors. This was a shock to the nation as the then Chief Minister of Gujarat, Shri Balwant Rai Mehta, and his wife Saroj Ben were passengers in it. Also lost in the incident were the crew, Captain Jehangir Merwan Engineer, Pilot, Mr. A M Da’Costa, Radio Engineer, Mr. V B Thorat, Aircraft Mechanic, Mr. Francis Xavier Periera, PA to the CM and Mr. K P Shah, Journalist from the newspaper Gujarat Samachar.

My interest in this incident is because A M D’ Costa, the Radio Engineer was only 28 years old when he died. He was my father.

The crew members of the Beech 18 that was shot down – L to R : Captain J M Engineer, a former Sqn Ldr from the IAF. Radio Officer A M D’Costa, and V B Thorat, Aircraft Mechanic. 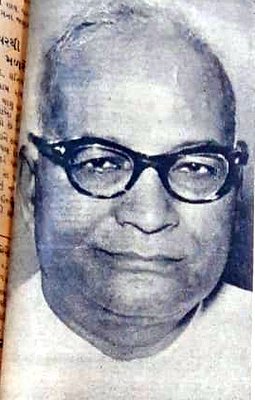 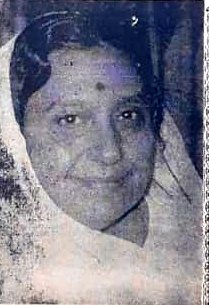 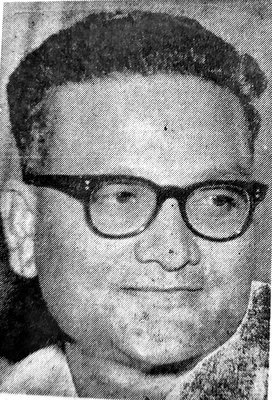 I was only 10 months old when I lost my dad. I didn’t even see him or remember him. My mother raised me as a single parent. Life was difficult growing up with only one parent, and I consoled myself that my father was up in heaven watching over me. During the years I was growing up, my inquiries about my father were met with vague explanations that “He died in a Crash” with no further details provided.

Around 2017 or so was when I first learnt the full details of the crash.  One day I happened to surf the Internet to see if there was any info about 1965 Indo Pakistan war. On Google, I found there was a write up about the plane crash. On reading the article I found out that the Pakistan Air Force pilot who shot down the plane was Flt Lt  Qais Hussain. I was shocked and angry on reading this.   I searched for him on Facebook and messaged him. He was very straightforward about it and admitted to the shooting. I was satisfied that I had found the person behind my father’s death but at the same time, I couldn’t control my emotions and blurted whatever was in my heart.   He on the other hand, listened patiently to everything I had to say and apologised for everything saying, he did it in the line of duty. If he didn’t do it he would have been court-martialed. His senior officers give orders and he had to obey orders.

But what about the families that face the brunt of war?  The women and children.  As I was only 10 months old my mom had to look after me as a single parent first. She was a teacher in a school and part-time gave tuitions as the income wasn’t enough to feed us both and her parents as well. She gave me the best education I never made anything less for me.   As time flew by we had to move on, I grew up and here I am today narrating my story I don’t know if I will ever forgive Mr Hussain in my heart. After that interaction, I had put my inquisitiveness on the back burner.

A few months ago, came the release of the movie Bhuj, starring  Ajay Devgan. It was during the course of the movie that I heard them mention Balwant Rai Mehta’s plane. This sparked my interest again. I was overjoyed that the incident came into the national limelight. And in my excitement, I sent a message to my school group about this and urged everyone to watch the movie. But fate had something else in store for me.

One of my school friends who is a doctor in the US sent me a link on Facebook. This link led me to the author of a book written about the 1965 war. Mr Jagan Pillarisetti. Here began my actual story. Jagan was very helpful with information and we exchanged photographs and reports of 1965. In one of the images shared by him, There was a photo of a memorial erected in the name of the crash victims at the site of the crash. This memorial was in a remote corner of Kutch near the village of Suthri, where the aircraft came down.

I was so happy to know that there was something established in my Dad’s honour. At that moment, I made up my mind to go and visit the memorial. I booked my tickets for the 18th of September as I wanted to be there on the 19th of September being the death anniversary. At the time I booked the train ticket, I did not know anything about the local area. I was not even sure how I would make the journey from the railway station to the memorial.

At this point, I asked Jagan for help and he promised to ask around. Sure enough in a few days, he told me that he had contacted his friends in the Indian Air Force and the IAF offered to make the arrangements to help me through my journey.

Our train was scheduled to leave at 5:45 PM from Bandra. We left home by 3:30 pm and reach there quite early. The train left at 6:00 PM from Bandra station. We enjoyed the train journey with all the greenery around. The train reached Bhuj station at 8:30 AM on the 19th of September.

I was greeted by Flt Lt Ivan Rodrigues, a tall and well-built man with a very firm nature and a smiling face. our luggage was taken care of and we were escorted to the car . I was given a room to freshen up, after that breakfast which consisted of Dosa and chutney was served along with lovely tea. After breakfast, I went down to meet the Air Officer Commanding of Bhuj Station, Air Cmde Maluk Singh, and his lovely wife. I showed him the photographs which I carried and shared my story with him.

We then left by car . The journey was very long it took us two hours to reach the memorial. On the way, we were entertained by Flt Lt Rodrigues who took care of all our travel needs.

At last, we reached our destination, I was so happy. As I stepped out of the car, much to my astonishment I was greeted by a press reporter and the Sarpanch of Sutri village. I was a bit scared as to what was happening, but I gave them few answers and then proceeded towards the memorial. 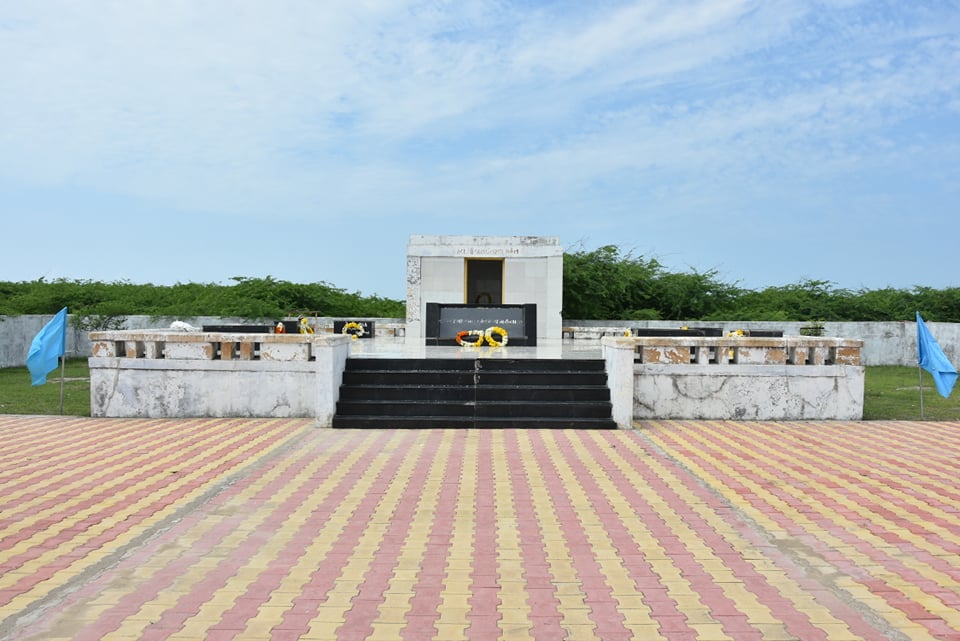 The Balwant Rai Mehta Memorial, built at the crash site at Suthri village on the Kutch Coast.  View the location on Google Maps at https://goo.gl/maps/PaqoHF6VGRVVZU6R7 . Originally there were three stone plaques constructed on the site. The current expanded memorial was built much later possibly in the late 90s or early 00s. The original plaques were moved into the small room behind the main memorial plaque on the site.

As I climbed those stairs I felt a shudder through my spine after 56 years I put my foot on the same soil where my dad give up his life. I took a wreath and a bouquet of Roses and placed it at my Dad’s memorial along with his photo.

As I stood there tears stream down my face. I then placed a wreath in front of all the other passengers marked in the monument. I had carried with me a photograph of Capt Jehangir Engineer, the pilot, which was provided by Mrs. Farida Singh, his daughter. 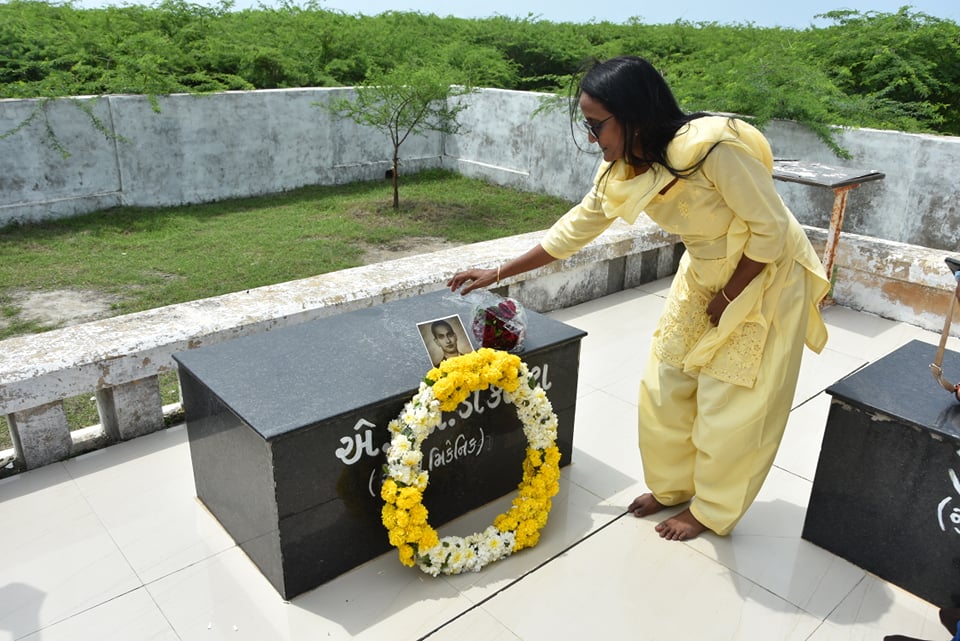 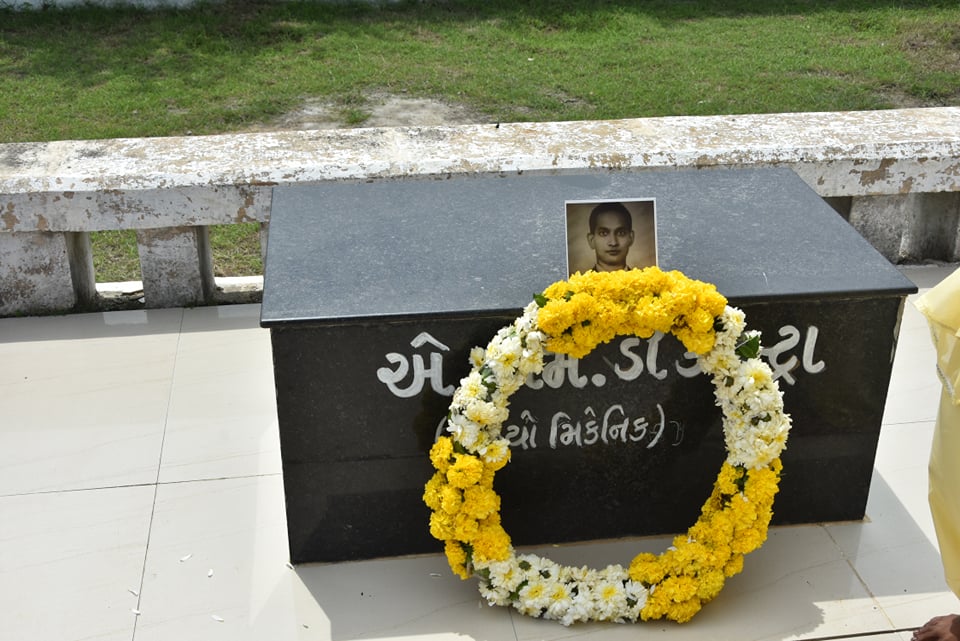 The memorial has seven granite stones with the names of the aircraft occupants painted on them. Here the stone for A M D’Costa (Radio Engineer) can be seen.  His daughter (And author) Precy D’Costa is seen laying a wreath and placing a photograph of him at the site. 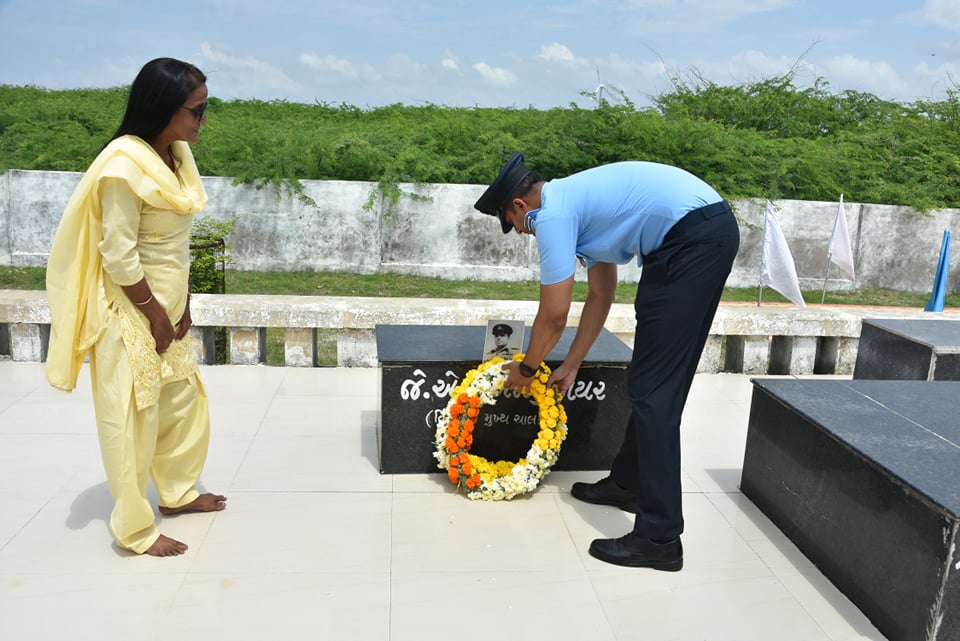 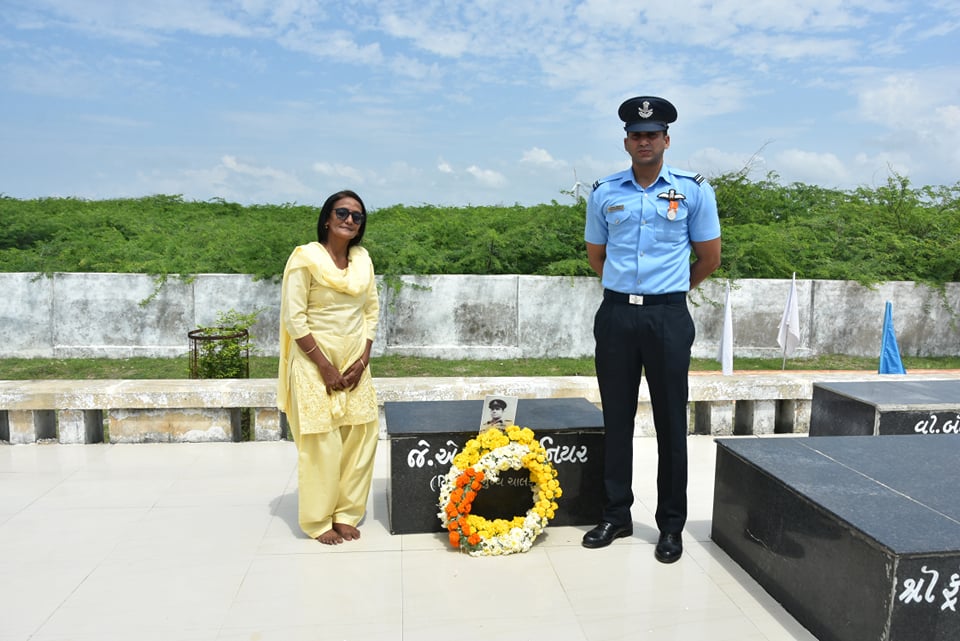 In an apt tribute, the local IAF Establishment, Air Force Station Bhuj was involved in making arrangement for Precy’s trip.  An officer accompanied her to pay tributes at the memorial. It should be noted that the pilot of the Beech was himself a former officer of the Royal Indian Air Force during WW2.  Precy carried with her a photo of Jehangir Engineer . She has been in contact with Jehangir Engineer’s daughter Mrs Farida Singh. 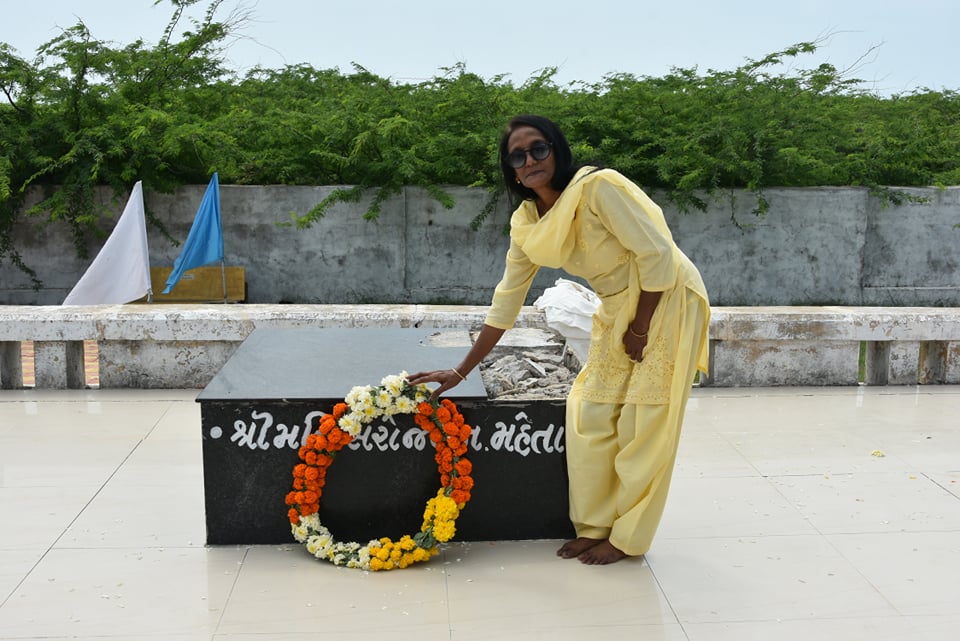 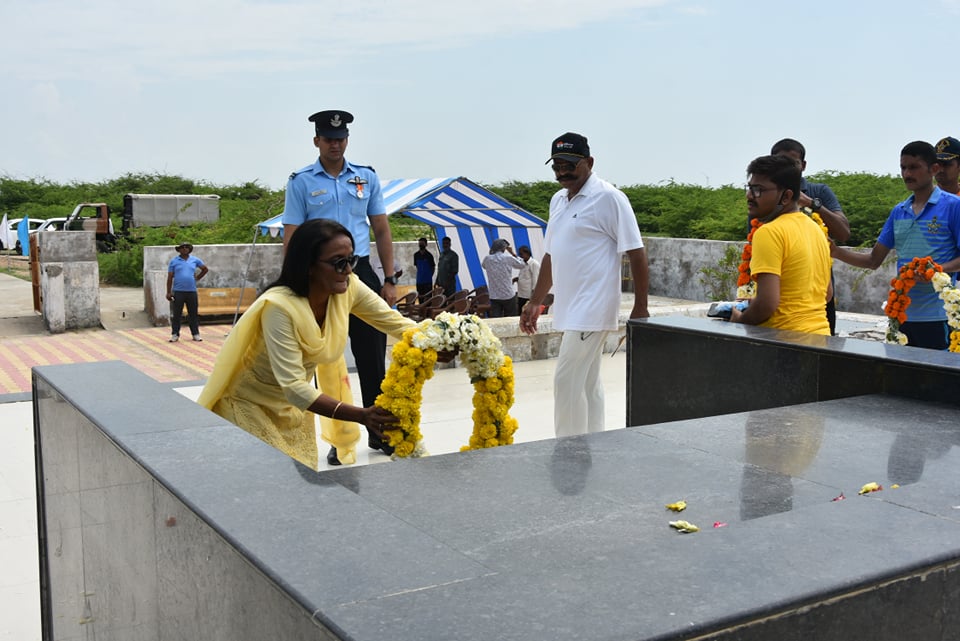 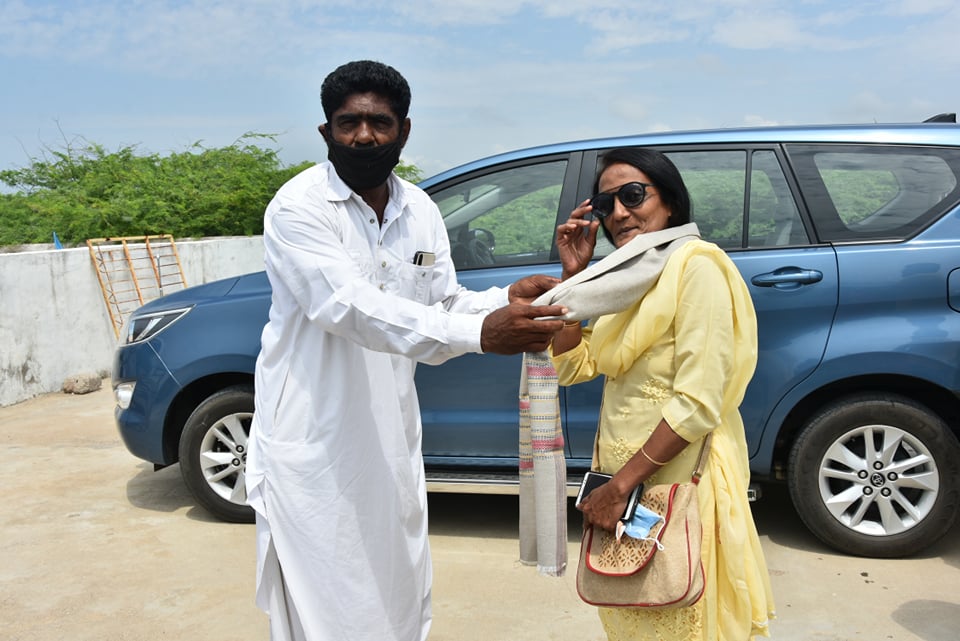 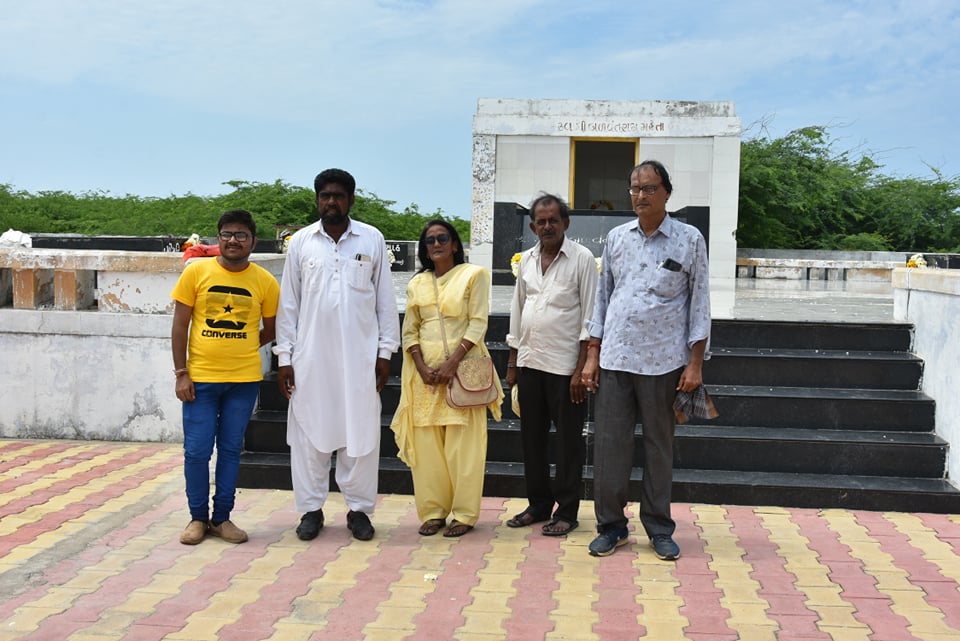 Unknown to Precy, or to the IAF, when they reached there, the villagers of Suthir village, their Sarpanch, as well as a Reporter were there on the site for an annual commemoration event carried out by a local NGO.  It was an unexpected meeting between the villagers and the daughter of one of the airmen who was commemorated there.  The Sarpanch of the village , Mr. Abdul Karim presented Precy with a shawl.

The Sarpanch of Suthri village put a shawl around me in honour of my dad.

One of the persons I met during the visit there was also an eyewitness, Mr Pranjivan who was 10 years old at the time of the crash. He told me that the pilot had saved many lives by steering the plane towards the sea.

I then spent 15 minutes all by myself meditating and praying for them. It was time to leave and as I walked back, I felt a kind of sadness wondering when will I come again. I exchanged few words with a reporter and then we left by car.

On our return journey to Bhuj, we stopped by the Kings Palace,  Vijay villas palace. We had lunch there before returning to the Air Force station. It was a long journey back again.

We went back to our rooms freshened up and packed our bags to get ready to go back to Mumbai. Ivan arrived at 7:30 pm to pick us up. We left for Bhuj station. Our train was scheduled to leave at 8:15 PM for Mumbai. My heart sank as I waved goodbye to Ivan and his Air Force team.

I wish I could have stayed longer. the memories of this trip will always be cherished by me. I came back with a heavy heart.

One thing is for sure, the villagers of Suthri have always been taking care of the memorial and commemorating the fallen airmen. I wouldn’t have known about it if I had not visited the location on that day. Certainly my family along with the family of Jehangir Engineer were moved by this fact, and to actually hear from someone who witnessed these events.

I want to thank the Indian Air Force officials, especially those from the Bhuj Air Force Station, for all the help extended to me from my arrival to departure to make my trip a very memorable one.

Air Marshal Sandeep Singh, Vice Chief of Air Staff
Air Marshal Vikram Singh, AOC-in-C SWAC
Air Commodore Maluk Singh, AOC Bhu
Flt Lt Ivan Rodrigues
The IAF driver who drove our car over the long distance.
The Indian Air Force photographer from Manipur
Mr Jagan Pillarisetti
and all my friends who supported and believed in me.
My kids who supported me on my journey.