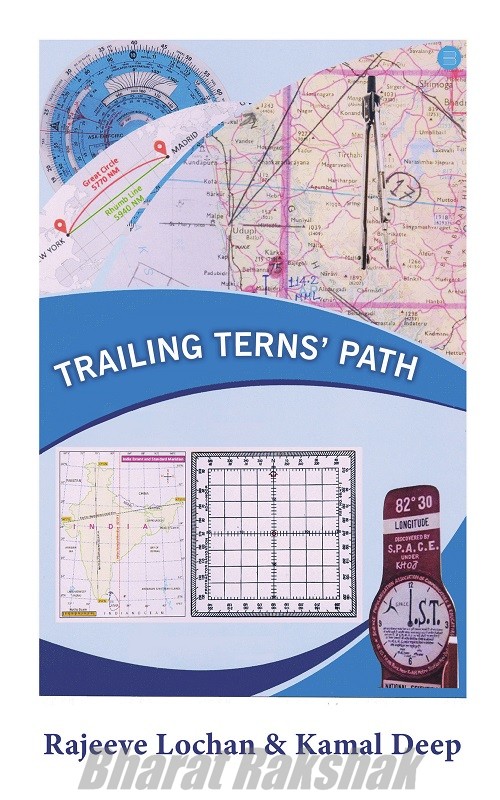 Trailing Terns’ Path is a book devoted to the Navigation Branch of the Indian Air Force. Written by two veteran navigators Wg Cdr Rajiv Lochan and Wg Cdr Kamal Deep, this is the first in-depth history covering the branch as a whole. Navigation Branch in this context also covers the short-lived “Observers” Cadre that was commissioned at the start of the Second World War.

The book is published in 2022 by Blue Rose One publishers and is available on Amazon and Flipkart. It’s a small format softbound book with about 195 pages, illustrated with black and white images throughout. The history of the navigation branch within the Indian Air Force is covered, starting right from the “Observers” branch and talks about the qualifications required for someone to become an observer. It transitions into the Indian Air Force’s introduction of observers and navigators that includes coverage of the first observers batch in 1939.

There is some space devoted to the tools of navigation, and I feel the authors may have missed an opportunity here by not going into detail. There are several technical aids that the navigation branch has used over the years and some space could have been devoted to explaining them. Especially the electronic aids used for navigation in the Canberra aircraft could have been showcased. As an aviation enthusiast, I am not aware of the tools of the trade that were used by a Navigator in an An-12 aircraft. Such questions are left unanswered.

The different roles that navigators had to play are covered – and there are a few first-person accounts sprinkled around the book. There is some excellent coverage of senior navigator officers over the years.

Other niche topics covered include the Canberras operations in Target towing units and induction of Navigators as Weapon System Operators in the Sukhoi squadrons.

There are tables of information at the end giving lists of Awardees, those who lost their lives in the course of duty etc.

The book is very reasonably priced at Rs 430 and this makes it very affordable and within reach of many. The fact that they cover a branch that hasn’t previously been discussed or chronicled makes the book an essential must-have in an aviation historian’s collection.

At the same time – there is a feeling that the authors should have attempted a larger format book with more content and good-quality photographs and in hard-bound format. More veteran accounts could have been added. There is potential to add more ‘war stories’ whether from war or from peacetime, of which many navigators have stories to tell.

It could be that the authors were driven by the economics of the market. This isn’t a subject that really attracts our well-known publishers. This would have resulted in the book being more expensive and the market being smaller – and one can’t have them all. Considering that the book still has so much information packed in there you can’t go wrong by having this in your collection.

Indian Air Force, the fourth largest Air Force in the world is a force to reckon with thanks to those wonderful men behind those wonderful machines that have guarded and continue to guard the Indian skies. Navigators have played an important part in the evolution of this force even though it is less glamorous and has generally remained hidden from the light despite the fact that the history of this breed of military aircrew is as old as that of the military aviation itself. Authors also pay their tributes to the galaxy of IAF Navigators who have contributed to shape the IAF of today and also to those Veteran Navigators who even excelled in civil life once they hung their IAF uniform, be it in the field of civil aviation or other fields. The rich legacy left behind by stalwarts of yesteryears is being untiringly carried forward with élan by today’s generation of Navigators in their pursuit to live up to the IAF motto ‘Touch The Sky With Glory’.