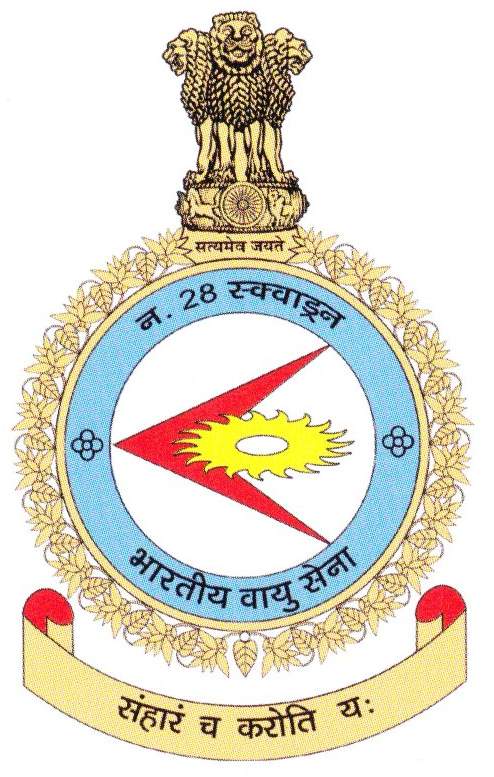 What happens when you take seven of the Air Force’s hottest fighter pilots, and give them the meanest, fastest fighter aircraft of the time to play with? Pure awesomeness. That’s what happened in October 1962, when Wg. Cdr. Dilbagh Singh (retired as CAS), Sqn. Ldrs. MSD “Mally” Wollen (retd. as Air Mshl) and SK Mehra (later CAS), Flt Lts AK “Mukho” Mukherjee, HS “Gilly” Gill, AK “Laddoo” Sen (retired as AVM), Denzil Keelor and BD Jayal (both became Air Marshals) reported to Air Headquarters for their final briefing before proceeding to Russia (Keelor had to return due to medical issues, but went on to become a hot-shot pilot in his own right). These seven experienced fighter pilots were handpicked to form the nucleus of the newly raised No. 28 Squadron, which was the first squadron to get the Mach-2 Mig-21F-13 (Fishbed-C or Type 74).

After the China war of 1962, the IAF had been looking for an aircraft to counter the threat from Pakistan’s acquisition of the Mach-2 F-104. After evaluating the US F-104 and French Mirage III, the MiG-21 was selected because it came without any political strings, and the Russians were licensing the technology for manufacture in India.

After four months of mind-numbing training (including how to taxi!) in the Spartan environment of the Lugovaya Air Base in the Soviet Union, they returned to Chandigarh to form the squadron. 6 MiG-21 (Type-74) aircraft had arrived in Mumbai in Completely Knocked Down (CKD) condition and had been assembled by Soviet engineers at 2 Equipment Depot, Cotton Green, Bombay. After one test flight each by the Soviet pilots, these were taken on by No.2 Equipment Depot. On 26 April 1963, a four aircraft formation led by “Boss” Dilbagh Singh got airborne from Bombay to Chandigarh, via Agra. The Supersonic era had begun. 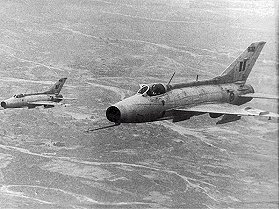 The Type-74, powered by the afterburning R-11 engine, had a unique tailed delta design with 57 degree swept-back wings and a fully-movable tailplane. The pitot tube was below the engine intake, unlike subsequent versions, where it was on top. The aircraft’s primary armament was the K-13 missile, and it had one 30mm cannon. It was primarily designed for short and fast intercepts, with the pilot “looking up”, guided by a radar controller on the ground. This was to prove to be a bit of problem in the low-altitude visual dog-fighting that was common in the sub-continent.

The initial days of 28 Sqn involved a lot of firsts, and very little precedent to go by. The MiG-21 was the first Soviet aircraft to be inducted in the IAF. Pilots had to get familiar with the aircraft, evolve maintenance procedures, flying syllabi, while at the same time become operational themselves. Their training in Russia had not included operational aspects like formation flying, or air-to-air attacks, so they had to evolve these tactics. Pilots flew wearing a full pressure suit, which restricted movement, visibility and caused tremendous discomfort in the North Indian summer. When an unfortunate mid-air collision resulted in the loss of two aircraft in preparation for the 1964 Republic Day flypast, a decision was made to dispense with the pressure suit except for high altitude sorties.

4 more IAF pilots joined the squadron – Flt Lt Vijayan, Fg Offrs Tipnis (later CAS), Deshpande (later Air Marshal) and Sonpar. Since the squadron didn’t have any trainers, modified procedures on a Hunter (half flaps and different speed settings) were used to stimulate the sight picture and speeds of the MiG-21, which was much faster than anything in the Air Force inventory.

In March-Apr 1965, the squadron received 6 more MiG-21PFs or Type-76 with R1L airborne interception radars and a movable intake cone. Unfortunately, with these changes, the aircraft lost its 30mm front gun. These were the only Type-76 aircraft the IAF ever saw. The Type-76 with its radar was frequently scrambled to intercept high altitude reconnaissance flights by Pakistani RB-57s, which turned away as the lone supersonic interceptor climbed to meet them.

Since the Kutch alert, 28 Sqn had moved to Adampur and was on high alert. Training, especially missile firing drills, radar operations and interception, had been intensified. Leave had been cancelled. India’s first supersonic squadron was itching to show its stuff, especially against the PAF’s F-104. After the first few Combat Air Patrols (CAPs) over Pathankot from Adampur, one flight was moved to Pathankot. Mally Wollen (who had taken over as CO) fired a missile at a Sabre, but it missed because of the ground clutter at low altitude. Unfortunately, he was flying a Type-76, which didn’t have a cannon. When he landed back he is supposed to have said “For a cannon! Just for a cannon!”. He was so frustrated that he almost brushed the Sabre with his fin. A dusk attack by a Pak B-57 destroyed one Type 74 on the ground, and another two Type-76s were destroyed on the ground in Pathankot during refuelling, by a Sabre strafing attack. After this, the squadron regrouped in Ambala and carried out low and medium sweeps against Lahore and Kasur under Amritsar ADDC, but the PAF never came out to play. The 65 war was a bit of a damp squib for the squadron, but opportunity for revenue wasn’t far away.

After the war, the squadron began to receive the first Indian-built MiG-21FLs (Type-77) which was to become the mainstay of the IAF Fleet. More squadrons had been equipped on the MiG-21 and once SK “Polly” Mehra took over, the squadron was ordered to Tezpur in the East, which was to be its base till 1985. In Feb 1968, flying two boxes, 28 Sqn moved to Tezpur via Gorakhpur and Hashimara. BK “Bhoop” Bishnoi took over from Polly Mehra in 1970, to lead the squadron to its greatest glory in the 1971 war. 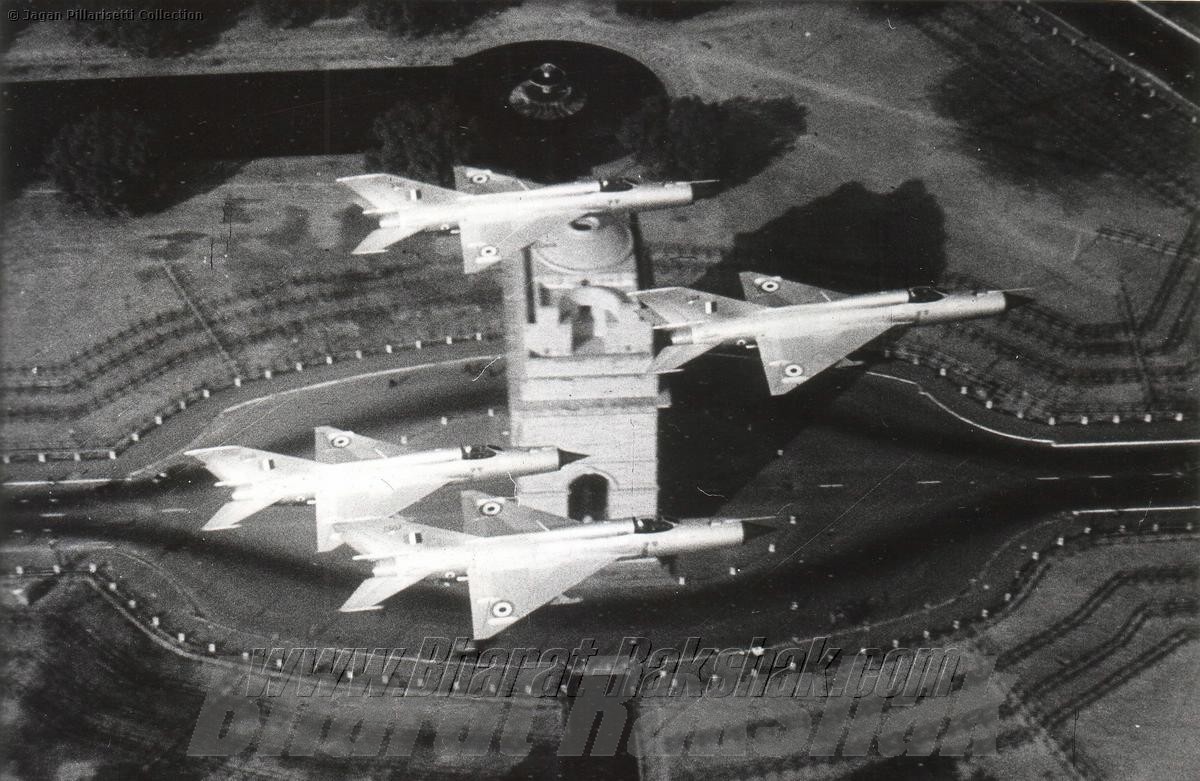 When the balloon went up in 1971, 28 Sqn was in Tezpur, and was ordered to move to Gauhati. Wg. Cdr. Bishnoi had the honour of leading the squadron in a rocket attack on Tezgaon airfield in the early hours of 4 Dec 1971. They later neutralized Pakistani air bases in Bangladesh through heavy bomb and rocket attacks, earning the title “Runway Busters”.

The high point of the Squadron’s participation in the 71 war came on the morning of 14th December. Wg. Cdr. Bishnoi, who had just returned from a mission, was scrambled with nothing more than a tourist map of Dacca. Once in the air, he was told to attack Government House, where the East Pakistan top brass were meeting. They found the target and attacked it accurately, putting 128 rockets through the windows.  Additionally, the target was attacked by MiGs of 4 Squadron and Hunters of 37 Squadron.  This combined onslaught this is said to have forced Governor Malik, the head of the civilian government in East Pakistan to resign his post leaving the Pakistani Military forces without the critical civilian administration. A full account of that strike can be found [here].

28 Sqn was awarded ‘Battle Honours’ for their role in the Bangladesh war, and. Wg. Cdr. Bishnoi won a “Bar” to his Vr. C. Vayu Sena Medals were awarded to G/C Mally Wollen, S/L DR Nadkarni, Flt Lts. KS Rangachari and CD Chandrashekar. There were several CAS Commendations and Mentions-in-dispatches.

The period after the 1971 war was marked by intense operational flying, converting a lot of newly-minted pilots to the MiG-21. Hundreds of pilots in the IAF and Navy today earned their “supersonic wings” on the strength of 28 Sqn. The squadron regularly deployed to Kalaikunda for armament practice, and flying was intense, starting early in the morning and continuing late into the night. The squadron diary also records several instances of the squadron winning awards at the Ekalavya Championships, Gunnery Meets, Squadron of the Year, etc.

In 1983, the squadron celebrated its 20th anniversary, with a reunion of old COs, led by Air Chief Marshal Dilbagh Singh, Chief of Air Staff. All 9 former COs were still serving at that time and attended the ceremonies in Tezpur.

After handing over their Type-77 Aircraft to MOFTU, the squadron moved to Poona in 1985, under a new CO, Wg Cdr Harish Masand (later Air Marshal). It had been given the honour (again!) of being one of the first two squadrons to convert to the new fourth generation air-superiority fighter aircraft, the MiG-29 “Fulcrum”. Sqn Ldr Arup Raha (later CAS) was the only officer from Tezpur to be on the strength of the squadron when it re-formed in Poona. After 12 pilots, 8 engineers and 50 airmen underwent training in Russia, the aircraft was inducted into the IAF in December 1987. Wg Cdr Masand quickly built a reputation with his mastery over the “Baaz” as it was called in the IAF. His ‘tail-slide’ and ‘hammer-stall’, and final ‘vertical Charlie’ have left many a spectator’s heart pounding and pulse racing!

The squadron was honoured with the President’s Standard in 1991. A number of former COs, including one of the original “seven”, SK “Polly” Mehra, who was the Chief, attended the function in Poona. The squadron diary records intense operational flying, range practice, deployments and exercises. The First Supersonics participated in many Republic Day fly pasts, “Vayushakti” exercises, and exercises against the Navy and other Air Forces. 28 Sqn was selected to be featured in a long and detailed National Geographic documentary.

In 2007, to make way for the Sukhoi-30MKI, 28 Sqn moved out to Jamnagar, where it is based today. The squadron celebrated its Golden Jubilee in 2013, marking 50 years from when Dilbagh Singh created the first MiG-21 sonic boom in Indian skies.

The seeds were sown right when the IAF picked its finest pilots to convert to the MiG-21 in 1963. The high professional standards established by those pioneers were passed down through the years, and 28 squadron remains one of the most respected and prestigious squadrons in the IAF today. An analysis of the list of former Commanding Officers shows that a significant proportion of them have risen to high ranks, but to a man, they will all count their time as “Boss” of the “First Supersonics” as the most satisfying time of their professional flying careers.

P.R. Ganapathy is an author of military-themed spy thrillers, and almost joined the Air Force Academy. Instead, he now gets his kicks flying Cessnas and Pipers and fighter aircraft simulators on his computer.