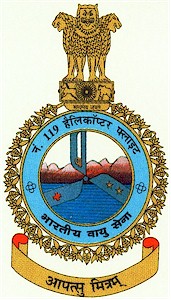 “The Stallions”
Apatsu Mitram – A Friend in times of need

119 Helicopter Unit, Air Force is one of the premier flying units of the Indian Air Force. It was raised on 03 Mar 1972 as ‘Angels Of Mercy’ at Air Force Station Guwahati under the command of Wg Cdr Bobby Johnson. The unit was equipped with five Mi-8 helicopters.

The unit has traversed the length and breadth of the country, enriching its experience in the varied theatres of operation. The unit participated in a major flood relief operation in J&K in the year 1973 and evacuated 1400 people in two days.

In 1975, the unit was the proud recipient of a Shaurya Chakra, Vayu Sena Medal and Vishisht Seva Medal in recognition of the outstanding contribution towards relief operations for the victims of earthquake in Himachal Pradesh, wherein 54 tons of relief material was airdropped in seven days.

In May 1980, 119 HU flew 346 hrs towards VVIP commitment and for this remarkable achievement, received letters of appreciation from the Prime Minister, the Chief of Air Staff and the AOC- in-C HQ WAC. During this period, the unit also achieved the remarkable feat of transporting a 30 ton Medium Girder Bridge in segments. The unit was also involved in a unique fire fighting operation where it helped the fire fighters in dousing a raging fire in the Gopala Towers in Delhi.

During the period from 1985 to 1988, the unit was instrumental in carrying out operations in support of counter insurgency operations in Nagaland and in operation Falcon in Arunachal Pradesh by flying 400hrs per month for supply dropping 600 tons of load.

The unit was moved to AF Stn Sulur for Op Pawan in Srilanka on 23 Feb 88 and was re-christened as ‘THE STALLIONS’. The unit flew a total of 3800 hrs while undertaking multifarious roles ranging from SHBO, Logistic support, Communication, Cas Evac and air dropped 2820 tons of load and air lifted 42026 troops during Op Pawan in Srilanka. In recognition of its service in keeping peace in Sri Lanka, the unit was presented a Tri-Services flag and was awarded one Vir Chakra – to the CO Wg Cdr D N Sahae, and four Yudh Seva Medals.

119 HU moved to its present location at Air Force Station Jamnagar on 20 May 1990 and soon thereafter was declared the ‘Best Helicopter Unit’ in SWAC for 1990-91 and again in 1993-94. The Unit has a unique distinction of carrying out the first ever night bombing by Mi-8s in 1991 and the first ever air maintenance by night by Mi-8 helicopters in 1998.

The Helicopter Unit has been called upon time and again to undertake missions in aid to civil power. During the cyclone in Jun 96, the unit rescued civilians and navy personnel and earned two Vayu Sena Medals. In 1996, the unit carried out extensive flood relief operations in Gujarat and Rajasthan providing relief and succour to the marooned people.

In 1998, the unit carried out flood relief operations in Surat rescuing 19 people and air dropping 75 tons of relief material to the marooned people. On 18 May 99, the Gujrat coast was hit by a severe cyclonic storm. On 19 May, unit rescued eight fishermen from open sea in extreme weather condition. On the same day, another helicopter saved five more lives.

On 14 Aug 99, a PAF aircraft `Atlantique’ was shot by IAF MIG 21 while intruding into Indian airspace. 119 HU shot into prominence by successfully spotting and salvaging the wreckage from the Indian side of the border, a feat for which Sqn Ldr Pankaj Vishnoi was awarded the Vayu Sena Medal (Gallantry).

Subsequently on 16 Aug 99, a formation of three helicopters carrying journalists to the crash site was fired upon by a Pakistani SAM. The formation was saved by ordering tactical action after spotting the missile by the vigilant crew.

In Sep 99, 119 HU under took flood relief operations in Hoshangabad and in 2004, unit carried out flood relief ops in Bihar, Gujrat, Daman and Diu saving precious lives and providing much needed supplies to the civilian population. In May 04, unit rescued 06 Marine and Para commandoes who were lost in the creek area and were missing for 24 hrs. Unit also maintained a one aircraft detachment in Srilanka and provided medical relief and Cas Evac to the people affected by Tsunami.

In 2007, unit was called upon to undertake a rescue mission in the Union Territory of Diu. The crew displayed exemplary skill in rescuing eight fishermen stranded on a lone tower in the middle of the raging sea in extreme weather conditions. In another instance of rescue, the unit picked up 18 crew members of a ship MVS Glory belonging to Iraq, which had run aground due to bad weather in Kori creek.

In Sep 2008, unit displayed exemplary professionalism and coordination in rescuing an ejected MIG 29 pilot from the sea. Responding to the SOS call, one helicopter flying in the area reached the ejection site and kept the downed pilot in sight while the SAR helicopter was launched and thereafter guided the SAR aircraft to the crash site, leading to a successful rescue of Flt Lt S Dhir without wastage of precious time.

On 08 Nov, 119 HU was tasked to carry out election duties Ex Jagdalpur in Chhattisgarh. The unit flew 58 sorties airlifting 215 passengers and 2905 kg load in the Naxalite affected areas. In supporting the democratic process of elections alive, the unit lost one airwarrior – Sgt Mustafa Ali, when the helicopter came under fire from the naxalites during take off on 14 Nov 2008. The crew, led by Sqn Ldr T K Chaudhri showed exemplary courage and presence of mind where in they took evasive action and inspite of the loss of one crew member and the aircraft being damaged, flew back to safety – saving the lives of 12 passengers and government property. This act of bravery also denied a source of propaganda to the anti-national element and projected the image of the unit and the Air Force in a praise worthy manner. Sgt Mustafa Ali was awarded the Shaurya Chakra posthumously. The pilot Sqn Ldr T K Chaudhri received the Shaurya Chakra as well for bringing back the helicopter safely under extenuating circumstances.

Within days of this happening, On 27 Nov 08, the entire nation was shocked by the audacious terror attack in Mumbai. On receiving a call, unit immediately launched two helicopters to participate in Op Black Thunder. The unit successfully dropped 64 NSG commandos for the mission and airlifted 11 passengers and five causalities during the operation.

In Sep 2010, 119 HU participated in the first live CSAR simulation in Jodhpur for revalidating the SOP. Also the unit participated in Ex MahaGujraj , Ex Tatrakshak. Unit flew formation for the Presidential Standard Presentation at 2 WG , AFS Pune in Jan 2011.Unit was awarded the Best Helicopter unit in SWAC in Ex – Eklavya as well as in individual (bombing) , and also the overall bombing comprising of both night and day.

Since its formation in 1972 unit has pioneered and performed diverse roles in various parts of the country and abroad .Unit has displayed versatility by developing operational capability in varied terrain and climatic conditions. This is evident from the fact that unit got 1 Vir Chakra, 5 Shaurya Chakras, 4 Yudh Seva Medals, 1 Vishist Seva Medals, 9 Vayu Sena Medals, 2 Mentions in Despatches and 43 Commendations by the CAS. It has been an angel for the people in distress, a deterrent for the anti national elements and a source of inspiration for the rest. Unit has always lived up to its reputation by accepting new challenges and completing the allotted tasks in the most professional manner. It has nurtured youngster’s fresh from the training institutes and transformed them into thorough professionals. Thus unit has lived up to its motto of ‘EVER ONWARD’