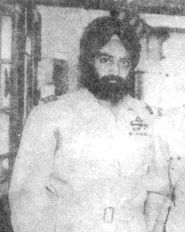 Few names in the Indian Air Force (IAF) evoke such awe and inspiration as the mention of Air Commodore Mehar Singh, MVC, DSO. Mehar Baba, as he was known, was one pilot who aroused instant admiration and respect from his subordinates. Qualities that prompted the remarks of one of his junior officers, Air Marshal Asghar Khan, who later went on to become the Chief of Air Staff of the Pakistan Air Force, to say, “With the solitary exception of Sqn. Ldr. Mehar Singh, a pilot of outstanding ability, no one was able to inspire confidence among us.”

Mehar Singh was commissioned as a Pilot Officer on 1st August 1936 passing out from Cranwell. and posted to the sole Squadron in the Air Force. No.1 Squadron then based in the North West Frontier. He went into action immediately against the Frontier Tribesmen. He flew missions with a devastating passion, including one month in which he flew 100 Hours!

On one particular occasion, his Wapiti was shot down. He was raiding the positions of a force of tribesmen, when his fuel tank got punctured by rifle fire. When the Wapiti’s engine cut out, he force landed the flimsy biplane into a valley. Due to the rocky ground, the aircrafts under carriage sheared off and the biplane got totaled. However, Mehar Singh and his gunner extricated themselves from the wreckage and gave the tribesmen the slip as the darkness fell. They traversed hostile territory all night without maps, till they stumbled onto a post manned by the Tochi scouts. Mehar was back in his squadron the very next day and flying again!

After the outbreak of World War 2, Mehar Singh formed No.6 Squadron at Trichinopoly on 1st December 1942. The squadron was formed with the merger of the Coastal Defence Flights and was equipped with the Hawker Hurricane. The squadron flew its first operational sortie in November 1943 and was trained in the role of a recon squadron. Under Mehar Singh’s able leadership, the squadron earned the sobriquet, “The Eyes of the Fourteenth Army” (The 14th Army was the British Army commanded by Gen William Slim).

The squadrons Hurricanes became a popular sight with the forward troops, who used to call them different names ranging from “The Arakan Twins” to “The Maungdaw Twins”. The squadron reached such heights of efficiency that Field Marshal Slim remarked in his book Defeat into Victory that, “I was particularly impressed with the conduct of the squadron led by a young Sikh Squadron Leader. (Mehar Singh)…They were a happy and an efficient unit.” At the end of the tour of the Squadron, Mehar Singh was decorated with the Distinguished Service Order (DSO). The only such award to the Indian Air Force ever.

The call of duty beckoned again in 1947 after independence, during the tribal invasion of Kashmir. Mehar Singh, now an Air Commodore, was put in charge of No.1 Operational Group at the time of independence, was in charge command and control of air operations in India. Mehar Singh led from the front. He flew many of the pioneering and daunting missions himself. He never put into risk his men in tasks for which he would not venture himself first.

One of the first assignments on Mehar Singh’s task list was the relief of Poonch. Poonch was an isolated garrison which was cut off from motorable roads due to enemy incursions, and it was left to Mehar Singh to supervise the air relief of Poonch. Mehar Singh personally flew a Harvard aircraft and landed it at Poonch airstrip which was newly constructed. The very next day, Mehar repeated the feat, this time flying a Dakota. Soon after Dakotas started bringing in supplies, evacuating causalities and when the necessity arose, flying down the Mountain Howitzers of the Hazara Mountain Battery for the defence of Poonch.

Mehar Singh’s flight to Leh in Ladakh has been well chiseled into annals of the Indian Air Force’s legend. When the remote district of Ladakh was in a danger of being cut off and overrun by a Pakistani force from Skardu along the Shyok Valley, a decision was taken to fly troops by air to Leh, which had an airfield at an altitude of 11,540 feet. flying an uncharted route, over hills and peaks ranging from 15000 feet to 24000 feet, Mehar Singh flew the first Dakota to Leh and landed it at the highest airstrip in the world. The faith in this man was re-imposed by none other than the commander of land forces in the Srinagar Valley sector, Major General K.S. Thimmayya, DSO, who accompanied Mehar Singh on the pioneering flight.

Mehar Singh also undertook the conversion of Dakotas into bombers. The Dakotas were modified to carry 500 lbs. bombs in their cargo bay and the cargo handlers were trained to roll out the bombs out of the door onto targets below.

Things were not fine, however, though fighting the war was taking up most of Mehar Singh’s time, there was also an undercurrent of resentment building up inside him. Mehar felt that the recognition due to him in the air force was not given, and added to the fact that he did not get along with some of his senior officers in the air force, Mehar decided to put his papers in August 1948. The Defence Minister, Sardar Baldev Singh, relieved Mehar Singh in September. Thus ended Mehar’s association with the service he loved.

But he still carried on the profession he loved…flying. Mehar Singh moved onto civilian flying. He returned to the spotlight for a brief moment in 1950, when he recieved the Maha Vir Chakra (MVC) from a grateful nation, when the gallantry awards were instituted. As the senior most officer, Mehar Singh received the first Maha Vir Chakra to the Indian Air Force. Therafter, Mehar went back to flying Dakotas and transports, becoming the personal pilot of the Maharaja of Patiala.

Indian Aviation suffered one of its most tragic losses on 11 March 1952, when Air Commodore (retd.) Mehar Singh, MVC, DSO, was killed in an civilian air crash. Thus, in a violent end, was cut short the life of a legend.