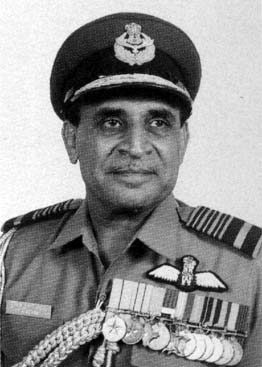 Surinder Kumar Mehra was born in Delhi on 15 November 1932, educated at the Modern School in New Delhi, and thereafter at the Delhi University.

He was commissioned in the Indian Air Force in December 1951 as a fighter pilot at a young age of 19 years, and served the IAF for 42 years prior to his retirement as the Chief of the Air Staff.

After commissioning, he went on to become an outstanding combat pilot well versed in both the air defence and strike roles. Even as a young squadron pilot, he was selected as a member of the Aircrew Examining Board, a body that sets standards and examines the aircrew on the skills demanded of them in flying operations. Command of his first squadron came in 1962, when he took over No.7 Battle Axes flying the Hawker Hunter. He was a Squadron Leader then. After the upgradation of ranks, Mehra got posted to the newly raised No.28 First Supersonics Squadron. There he trained on the MiG-21 fighters, at a time when the No.28 Squadron was the sole MiG-21 squadron.

In 1967, Mehra took over command of No.28 Squadron as its third CO. The Squadron moved to Hashimara in the East. He was awarded the VM for his command of the Squadron. In 1970, Mehra handed over command to BK Bishnoi on a posting to Air Force Staff College in the United States. On returning from the US in 1971, S.K. Mehra moved on to Eastern Air Command’s Operational Staff. The 1971 War was spent on the EAC’s Planning & Operational Staff. He was commended for some specific non-conventional operations which are classified. He was awarded the Vayu Sena Medal in 1971.

Mehra then went on to command the Tactics & Air Combat Development Establishment (TACDE) which is the cradle of all combat doctrines. He spent three years in command of TACDE from 1973-1976. A stint with the Indian Ambassador’s Office in Russia as the Air Attaché followed. He received the AVSM in 1976. On promotion to Air Commodore, he commanded Adampur and later Jamnagar Air Force stations.

The senior staff appointments held by him at Air HQ include Director of Air Staff Inspection – an organisation that assesses and reports on the operational standards of field units, Director of Personnel (Officers), Assistant Chief of Air Staff (Operations), and Deputy Chief of Air Staff. His experience thus represents an ideal blend of personnel management, operational planning, and higher level futuristic re-equipment planning of the Air Force. As the DCAS, he was fully involved in inter-governmental negotiations and in negotiations with the industry on Air Force acquisitions, as also with the Defence R&D.

In 1987, Mehra took over as Air Officer Commanding-in-Chief, South Western Air Command with the responsibility of all air operations in Rajasthan, Gujarat and Maharashtra. In 1988, he took over as the Chief of Air Staff from Air Chief Marshal La Fontaine. His tenure saw the eyeball to eyeball confrontation with Pakistan on Operation Brasstacks, the de-induction of the IPKF from Sri Lanka, and acquisition of new systems into the Indian Air Force like the Mi-35 attack helicopters.

Air Chief Marshal Mehra retired in 1991, after 40 years of service. During his career with the Air Force, he had accumulated over 3200 hours of flying, and held a PVSM, AVSM and VM for his distinguished services rendered.