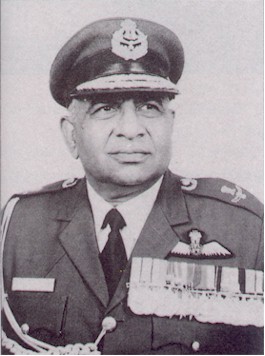 Nirmal Chandra Suri was born on 26th July 1933. He studied in St Xaviers School in Calcutta and then continued his schooling with the Royal Indian Military College at Dehradun. He was a member of the First course of the Joint Services Wing (the precursor of today’s National Defence Academy) and trained as part of the 57th Pilots Course at the No.2 Air Force Academy in Jodhpur.

He was commissioned as a fighter pilot on 15th March 1952 and joined No.4 Squadron, flying Vampire fighter bombers. He subsequently served with Nos 2 and 27 Squadrons. After a period of operational flying, he was selected for the QFI training. He was rated as an A1 Instructor, this enabled him to become a QFI at FIS itself. Subsequently, in 1960, he completed the Pilot Attack Instructors Course.

After the war, Suri took over command of No.20 Squadron. He was instrumental in converting the squadron to the newly inducted Type 56a , and also modifying them so that they could carry the inboard tanks on the outboard pylons. At the end of his tenure in 1969, Suri was awarded the Vayu Sena Medal (Devotion to Duty).

After a brief stint in Iraq on instructional duties Suri returned in 1971 to join the Aircrew Examination board as an examiner.

Fate would decree that Suri would have to lead yet another Squadron. During the 1971 War, No.7 Squadron which was operating Hunters in the Western Sector lost their commanding officer when Wg Cdr BA Coelho had to eject in Pakistani territory. Suri was sent from AEB to Nal to take over the Squadron for the rest of the duration. He flew several sorties with No.7 Sqn during the war.

After the war, on promotion to the rank of Group Captain, Suri took over AFS Hindon in August 74. Subsequently, in January 1976, he was with the National Defence College for a course. In January 1979, Suri received his second command stint of an air force base, this time the much larger AFS Lohegaon at Pune, which was at that time inducting the newly acquired MiG-21 Bis fighter. AFS Lohegaon performed outstanding during this period,l winning all the trophys instituted by central air command during his tenure. At the end of the tenure, Suri was awarded the AVSM in 1982

A series of staff postings followed, SASO Central Air Command, coinciding with the induction of the Mirage 2000 and other equipment like the An-32 and Il-76. After promotion to Air Marshal, Suri held the appointments of AOC Personnel. In 1987, he was awarded the PVSM. He subsequently took over Central Air Command as the AOC-in-C. During this time CAC was active in the Sri Lankan Operations, lending its Mirage 2000s, Il-76s and An-32s in the build up to Op Pawan. Subsequently Suri moved to Air HQ as the VCAS.

Suri was appointed as the Chief of Air Staff on 1st August 1991 after 41 years in uniform . During his tenure as chief, He was instrumental in various initiatives – including the induction of women officers in the IAF first as ground duty officers and later as pilots. The entire process for the ground breaking decision was taken in a matter of months!

He also kicked off the golden jubilee celebrations of the IAF – during which time several initiatives were taken to preserve the historical aspects of the Air Force. The IAF’s Golden Jubilee film “Salt of the Earth” was produced during this phase.

Throughout his air force career, Suri was a passionate flyer, even after achieving Air Rank, he never passed on an opportunity to fly. He actually logged his 6000th flying hour at Gwalior during the Golden Jubilee celebrations of No.7 Squadron, flying in a Mirage 2000. By the time of his retirement he had over 6200 flying hours under his belt.

Air Chief Marshal Suri retired on 31 July 1993 and was succeeded by Swaroop Krishna Kaul. After retirement Air Chief Marshal Suri had another remarkable achievement when he was awarded the PhD afrom the Intercultural University in Netherlands at the age of 63. He still continues his higher learning studies and is currently settled in NOIDA.

Then Sqn Ldr N C Suri (Standing 1st from Left) along with other members of No.20 Squadron at Hindon in 1964.

CAS visits Halwara at the end of the 65 War. NC Suri is seen standing 4th from left