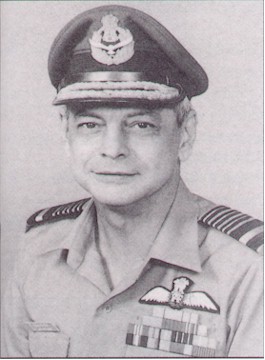 Educated at St. Anthony’s High School at Lahore and at St. George’s College at Musoorie, he enrolled into the Indian Air Force in October 1947. He did his training on the Tigermoth aircraft, moving on the Harvards, Spitfires and the Tempests aircraft. He was commissioned into the flying branch at Ambala in April 1950.

La Fontaine’s first posting was to the No.7 Battle Axes Squadron flying the Tempests. When No.7 converted to the De Havilland Vampires in 1951, La Fontaine was one of the first pilots in the Indian Air Force to undergo training in flying the jets, which were the first jet fighters operated by any country in Asia. Soon after, La Fontaine was selected to undergo the All Purpose Instructors Course. Over the next three years, he spent his career imparting Beginner, Intermediate and Operational Instructions in flying in a variety of aircraft including the Tigermoth, the Harvard, Spitfire and Vampires.

In 1956, he returned to operational flying, when he was posted to the No.2 Squadron flying the Toofanis. Then La Fontaine moved onto No.29 Scorpions as a Senior Flight Commander. Command of his own unit came in 1960, when he was promoted to Squadron Leader and was entrusted to raising a new squadron, No.47 Black Archers. This Squadron, flying the Toofani, became the first Fighter Combat Squadron to win the Mukherjee Trophy in its first year of raising. After the upgradation of ranks of the Squadron Commanders of Fighter Squadrons, to Wing Commander, La Fontaine took over command of No.14 Fighting Bulls Squadron at Kalaikunda.

Flying the Subsonic Hawker Hunter, he was involved in the Indo-Pak Ops of 1965. La Fontaine led a unfruitful fighter interception sweep over the East Pakistani city of Jessore and an abortive interception to Barrackpore. Aircraft from his unit did take on the Pakistani Sabres over Kalaikunda and No.14 Squadron was the only Hunter unit in 1965 that encountered the enemy Sabres and got the best of them and were still unscathed by the end of it. Told to lay off operations against targets within East Pakistan, La Fontaine and his team did not see much action later on.

After the operations, as a Group Captain, La Fontaine was the Chief Instructor with the Air Force Academy. He was responsible for developing a system of graded performance standards that improved the quality of flying training. At the outbreak of the 1971 War, he was deputed as a Senior Staff Officer to the Maritime Air Operations Cell in Bombay to help out civilian airline operations. Throughout the 1970s, he held a variety of staff appointments with Western Air Command. He was Ops 1, Air 1 and later Senior Air Staff Officer (SASO) of WAC. In between these staff appointments, he also held some operational appointments in the form of command of two fighter bases.

As Air Marshal, he first was Air Officer Commanding-in-Charge of Personnel in the Air Headquarters. The first AOC-in-C Command came with the Central Air Command. Later shifted to command the Western Air Command. On the untimely demise of the then CAS, Air Chief Marshal L.M. Katre, La Fontaine took over as the Chief of Air Staff. After becoming CAS, he oversaw the IAF inducting state-of-the-art defence fighters like the Mirage 2000 and the MiG-29. Both were procured primarily to counter the Pakistani F-16 threat. The IAF was involved in operations for the first time since 1971, when it undertook supply and relief sorties over Sri Lanka. Later after the induction of the IPKF, the IAF was involved in supply and COIN operations. However La Fontaine could not oversee the complete operations of the IPKF. He retired in 1988, succeeded by Air Chief Marshal S.K. Mehra.

In the course of his career he was decorated thrice. He was a recipient of the PVSM, AVSM and VSM for distinguished service. La Fontaine now leads a retired life in a farmhouse at Brahmanapally Village in Medak District.