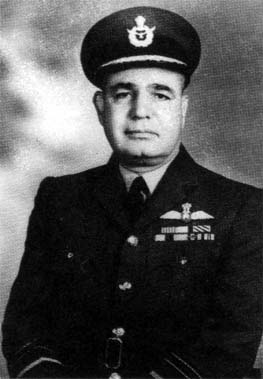 Aspy Merwan Engineer, the eldest of the famous Engineer brothers, was born on 15 December 1912. Engineer won the Agha Khan trophy for being the first Indian to fly from London to Delhi in a Gypsymoth. At only 17, he was the youngest Indian pilot of that time.

Trained at RAF Cranwell, where he was adjudged the best all round cadet. He was awarded the Groves Memorial Trophy for aerobatics. During his time he had to bale out of an Armstrong-Whitworth Siskin fighter and became the first ever Indian to use a parachute to escape in an emergency situation.

On commissioning from Cranwell, Engineer joined ‘A’ Flight of the IAF flying the Wapitis in the North Western Frontier Province. When No.1 Squadron was formed in July 1938 with the coming together of all the three flights, Engineer was one of the three flight commanders along with Mukherjee and ‘Jumbo’ Majumdar.

Engineer was the flight commander of ‘A’ Flight of No.1 Squadron which flew operations in North Waziristan. In May 1939, ‘A’ Flight under Engineer’s command carried out 403 hours of flying operations, a feat which was acknowledged as remarkable in view of the small number of aircraft and crew available with the flight. Fg. Off. Engineer became the first IAF Officer to be Mentioned-in-Despatches for action against the tribals.

In April 1941, Engineer was one of the seven pilots deputed to form No.2 RIAF Squadron with Westland Wapitis at Peshawar. He was posted as the Squadron Adjutant and after three months, took over command in June 1941. Engineer took the squadron to fly operations in the Tochi Valley, again flying to RAF Miranshah. During their stay at Miranshah, the squadron re-equipped with the Westland Lysander. Between February 1942 to October 1942, Engineer and his squadron were always on the move. First to Secunderabad, Poona, Arkonam, Risalpur and finally Ranchi. It was here, Engineer handed over command to H.U. Khan and went on to a staff job.

Immediately afterwards, in December 1942, Aspy Engineer was awarded the Distinguished Flying Cross (DFC), thus becoming the second IAF Pilot to be decorated with the DFC, after Jumbo Majumdar. Independence bought with it higher ranks and growth to Aspy Engineer. He was a Group Captain during the 1947 Kashmir Operations. Soon he was promoted as an Air Commodore and took over command of No.1 Operational Group. Later he was put in charge of Personnel & Administration. At the end of the tenure with the Air HQ, he was deputed to the fledgling Hindustan Aeronautics Limited, the flag bearer of the Indian Aeronautics Industry.

Engineer was the Managing Director of Hindustan Aeronautics Limited from 1958 to 1960. During this assignment, HAL did pioneering ground work in the development of an indigenous jet trainer and also the designing of the jet fighter. The Marut, as it came to be known finally flew its first sortie during Engineers’ tenure. On the sudden demise of Air Marshal Subroto Mukherjee, Aspy Engineer assumed office of the Chief of Air Staff from 01 December 1960. It was during his tenure as the CAS, the Indian Air Force found itself participating in numerous combat operations. First came the Goa Operations, and about the same time, a detachment of Canberras were sent to Congo where they participated in action against the Katanganese.

In 1962 conflict, the IAF was involved in a non-combatant role flying supply and transport sorties to Indian Troops in forward areas. Against the protests of Engineer and his staff, the Government did not allow the IAF to deploy combat formations against the Chinese. After the war, Engineer was responsible in overseeing the post war expansion of the Indian Air Force. Besides the setting up of new training facilities and infrastructure, this period also oversaw the induction of the first supersonic fighter, the MiG-21, the augmentation of the transport fleet in terms of more transport aircraft procurement and also the induction of more helicopters.

After retirement from the Indian Air Force, Air Marshal Engineer served as India’s ambassador to Iran. He passed away in 2002.