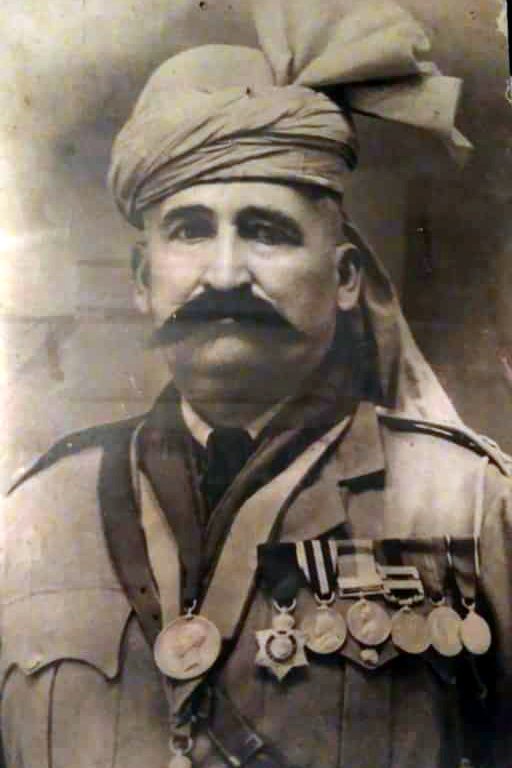 In 2010, while doing some data analysis on the database of Indian Air Force officers commissioned during the Second World War, I found out that some of the officers commissioned were born in the previous century! So looking at the dozen or so of these who were born in the 1800s, I glanced at the one with the oldest date.  He turned out to be Khan Bahadur Haji Gulmast Khan. At that time I noted:

"We all know that the oldest officer at any point of time in the Indian Air Force is probably the Chief of Air Staff - who retires as soon as he reaches the age of 60. Additionally there could be a Master Warrant Officer who reaches his late 50s before he retires. There have been cases where personnel from the ranks were commissioned into the Officer stream - and some of them pretty late in their career. But most if not all would have retired before hitting the 60 year mark.

Enter the mysterious IND/1721 Flight Lieutenant Haji Khan Bahadur Haji Gulmast Khan, commissioned into the Indian Air Force as a Pilot Officer on 10th October 1941. Gulmast Khan was among the first ever 200 officers in the air force, and was commissioned into the Administration Branch - then known as A&SD. What puts apart Gulmast from the others was that at the time of his commissioning, he was 59 years old! You see, Khan Bahadur Gulmast Khan was born on 1st May 1882!

Not much is known about Gulmast Khan. He seems to have served in the North West Frontier Province as much is known about him. The end of the Second World War found him on the strength of RAF Station Kohat - which at that time was the only RAF Station entirely staffed by Indian Officers. It was from this post that Gulmast Khan was demobilised. On 18th December 1946, Gulmast Khan was sent to No.1 Demobilisation Center at Lahore for release - at which point he was 64 years old!

Gulmast Khan, however, can only claim to be the IAF Officer with the oldest birthdate. The credit of being the oldest officer at the time of commissioning goes to IND/2112 Pilot Offr Edmund George Lazarus of the Signals Branch. Lazarus was born 14th Sept 1882 -- five and a half months after Gulmast. But Lazarus was commissioned as a Pilot Officer on 11th November 1942 - An year and a month after Gulmast Khan! Thus making him the oldest ever person to get a regular IAF Commission - at the ripe old age of 60 years and two months! (nearly). It is not know as to when Lazarus left the IAF. But he is noted as still serving as of October 1945.

No known photographs exist of either Gulmast or Lazarus - but it certainly makes an intriguing story to find out why and how they ended up getting commissioned in the Indian Air Force at such an advanced age. One can say for sure - that neither of these gentlemen will lose their records in the near future!  There must be some family in NWFP area in current day Pakistan, who must be descendents of Khan Bahadur Gulmast Khan. If you are that person - contact us - we would love to hear from you!"

The post was re-published on Facebook in 2015 and just as i hoped - it was seen by that "Some family in NWFP area in current day Pakistan... descendents of Khan Bahadur Gulmast Khan" and thanks to them today, we can shed more light on this gentleman.

Khan Bahadur Gulmast Khan was hardly 'mysterious' in the sense that he was a well established personality in the frontier.  He joined the Police Department on 18th December 1900. The two years prior to that, it is believed he served in the Indian Army - as indicated by family lore that he served in the Indian Army's 46 Punjab, as well as the presence of the East and Central Africa Medal (1897-99). 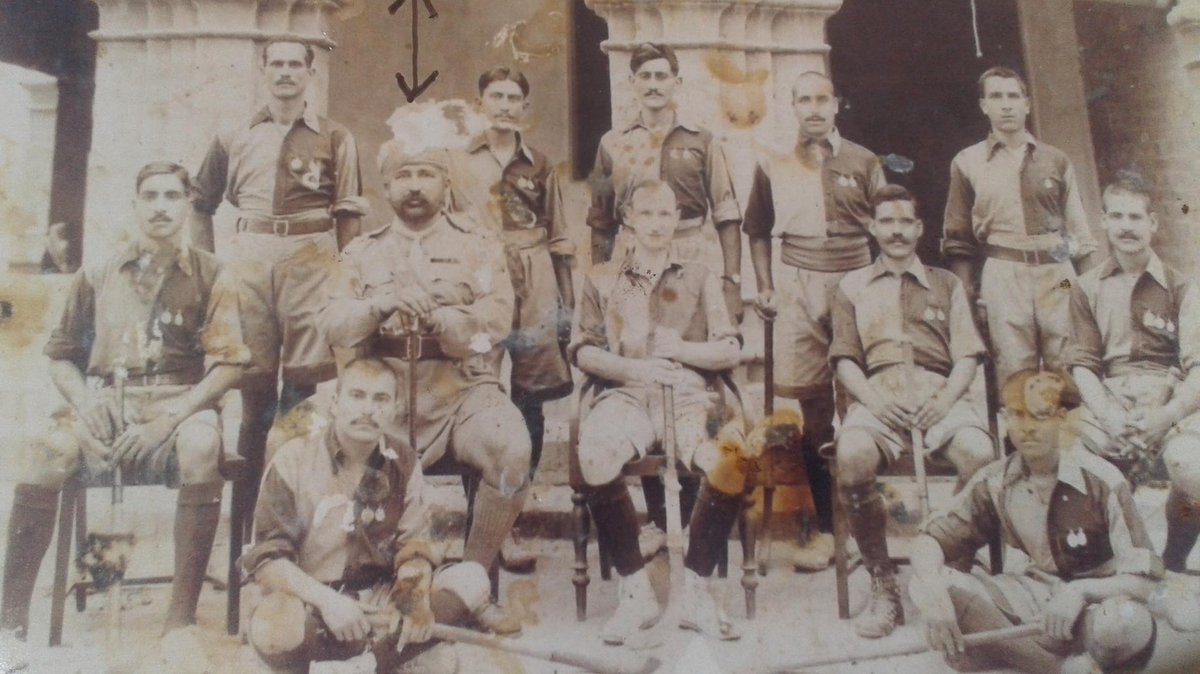 He had a distinguished career in the Police department for over three  and a half decades before retiring as a Deputy Superintendent of the Police - a signficantly top post in the British era. During his service, He was awarded the title "Khan Sahib" by the British on 1st January 1921, coinciding with the visit of the Prince of Wales.  By 1930 he was the officiating DSP at Dera Ismail Khan. He is listed in the Indian Civil List serving in NWFP for 1930 . In 1932, his title was upgraded to "Khan Bahadur" by the Viceroy,  when he was the DSP of Peshawar. 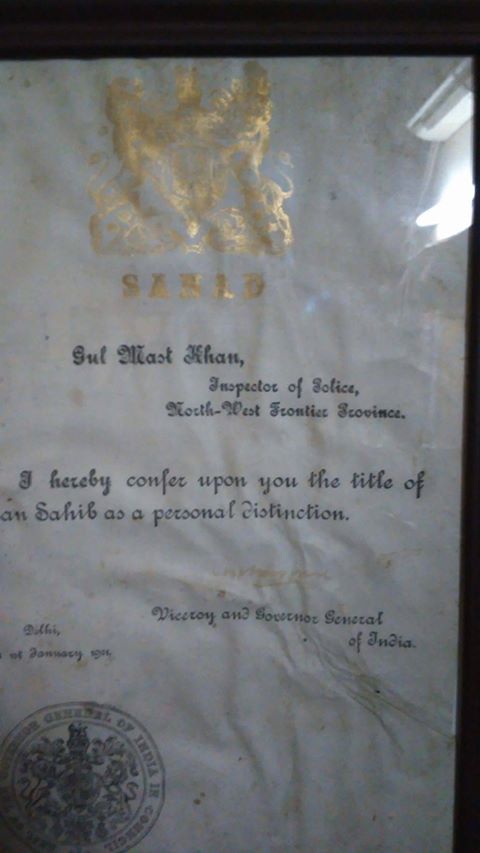 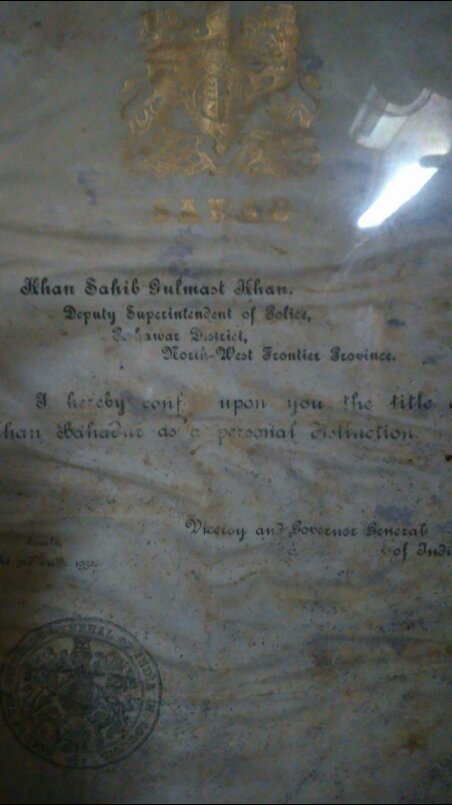 Gulmast Khan was awarded the Kings Police Medal for Gallantry in the 1936 New Year honours (London Gazette, 1st Jan 1936 and Edinburgh Gazette, 7th Jan 1936, Pages 29-30) .  An year later, he was picked to represent India as part of the Coronation Contingent to the UK in 1937. The Contingent comprised of over 600 officers from the Army, Air Force, Police, Territorials and other forces from the Indian Sub-continent. As a member of the contingent Gulmast became eligible to wear the Coronation medal 1937.  By this time Gulmast Khan was 55 years old and he retired from Police Service in early 1937 as DSP of Charsadda.

The outbreak of the Second World War saw him get back into uniform again.  The nascent Indian Air Force was expanding. The IAF Volunteer Reserve act authorised the airforce to induct both pilots and airmen in large numbers to supplement the war effort. It  is believed that the IAF/RAF Organisation decided to take advantage of Gulmast Khan's name and reach in the frontier area as an aid to their recruiting organisation.  As the war effort ramped up, two years into the war, Gulmast Khan was commissioned as a Pilot Officer on 10th October 1941 in the Administrative and Special Duties (A&SD) Branch . He was 59 years old at that time.

Gulmast spent roughly five years as an Indian Air Force Officer.  In November 1943, he was posted on strength to the 152 Operational Training Unit in Peshawar, as the Officer In charge of the Indian Establishment. As a former DSP of Peshawar, he must have held a grip on the young Indian airmen under his command!

Not much is known about his other activities, but the winding down of the war in 1945 also resulted in his demobilisation and end of his tenure.  Between 1st December 1946 and 18th December 1946, he was on strength of RAF Kohat, then under the command of Wg Cdr Mehar Singh.  On 18th December he was posted to No.1 De-mobilisation center for dispatch to civvie street.

Gulmast Khan passed away an year later in 1947, but his place as one of the oldest officers to be commissioned in the IAF has been cemented in history forever! 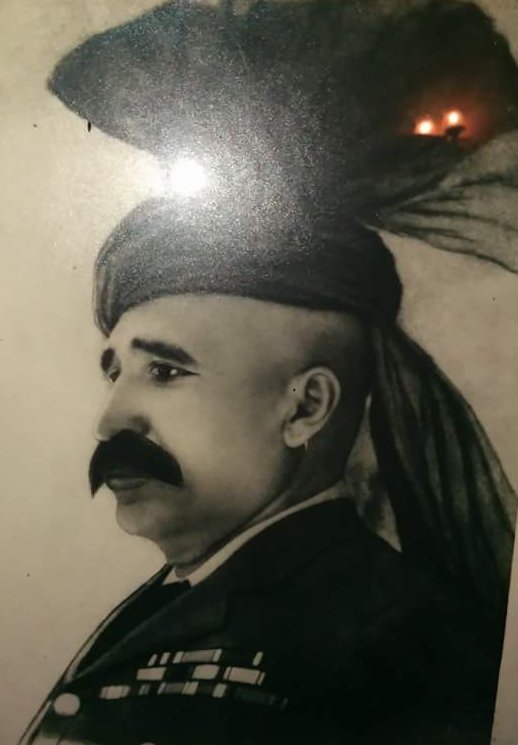 Thanks to Alam Khan and Moiz Khan Afridy (Great Grand-son) for providing the background and photographs.  Additional thanks to Mark Highton, Mathew B and other members of the SAGongs community for the research on Gulmast Khan's career in the Police and his medal entitlements.