In November 2019, the RAF’s Deputy Air Attache – from two and a half decades earlier – mailed him.  He was going to be in town with his wife and asked if he would be free to meet up with them on the 19th January ? He thought it over. His own family were returning on 18th January  after a Christmas and New Year holiday and celebration of his and his wife’s Golden Anniversary a fortnight earlier. He would be seeing his family off at the airport and would only be home after midnight. But he told his British friends he and his wife would be delighted to meet them and invited them to lunch.  After all, there was an unpaid debt he had to repay….

The journey started years earlier, way back in 1995.

He arrived at the cemetery at dusk. It was biting cold. 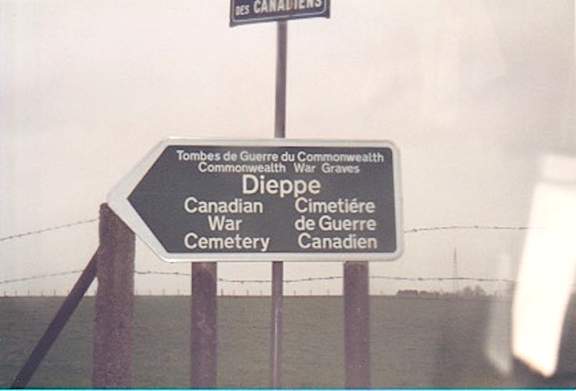 He carefully removed the wreath of poppies and the card which simply said, “Still remembered by a grateful Indian Air Force”. He propped the wreath alongside the sign “Dieppe Canadian War Cemetery 1939-1945”. He removed the twine and tried to tie it on both sides of the wreath. His fingers were numb and he was not able to do this otherwise simple task. He had to rub his hands together several times to get some life into them and then, with difficulty, he tied the twine to the wreath. 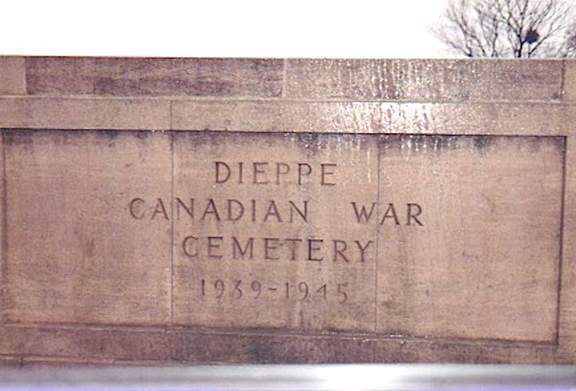 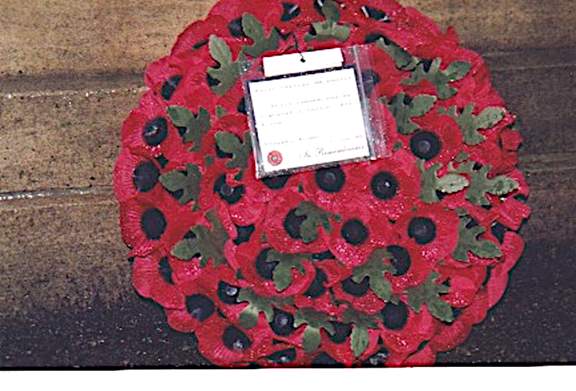 He walked into the cemetery and, brain numbed, couldn’t remember the row in which the officer had been buried. 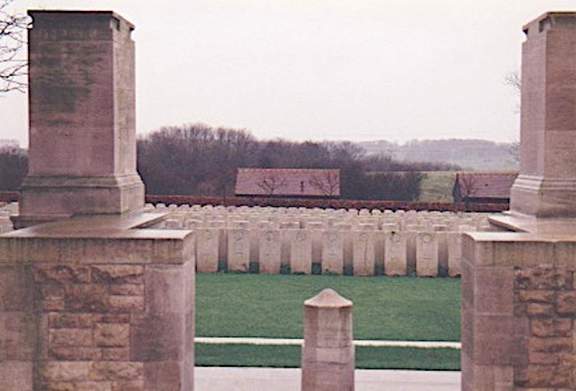 He had no option but to walk from row to row in the biting cold looking for the headstone. And then, to his relief, he found it in the 8th row – H6. Underneath the Air Force crest, it said plainly,

With severely numbed fingers, he tied the last knot securing the wreath to the headstone. 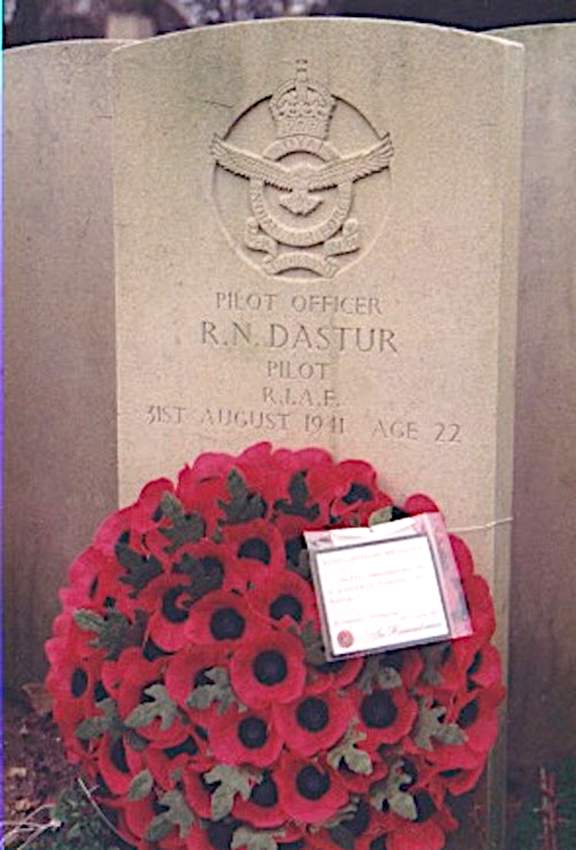 Then he rose slowly to his feet. Satisfied the wreath was appropriately tied, he came to attention and saluted the grave smartly in the bitterly cold dusk air of a January evening in the north of France. The Canadian War Cemetery at Dieppe was completely empty and there was no one on hand to watch this solemn ritual being played out. He was thankful, for he would have been uncomfortable doing this with an audience.

The winter uniform he wore was alone insufficient to protect him from the biting cold, but out of respect to the fallen warrior buried there half a century earlier, he had discarded his protective jacket. The sun had long set and the medals on his chest looked dull in the fast fading twilight. As he saluted, he solemnly whistled “Taps”. After the last bar was over, he jerked his right hand down and brought it to his side. He remained at attention, contemplating deeply.

At long last, he walked in as dignified fashion as he could away from the grave. He had achieved what he had set out to do many months earlier and he was entirely satisfied. He took some photographs and it was only when he had finished, that he found a shelter bearing the register which gave details of those buried in the cemetery and the location of individual graves. 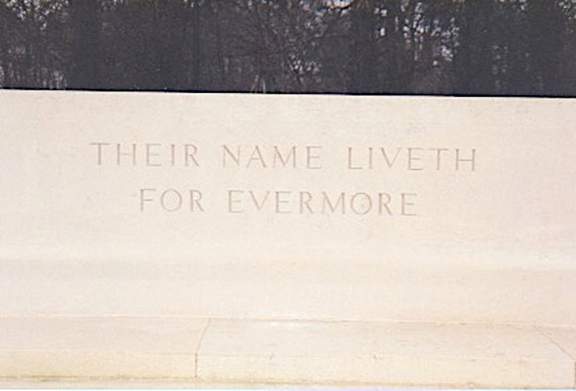 Left now, was the cemetery at Heverlee in Belgium. This too, he would do. 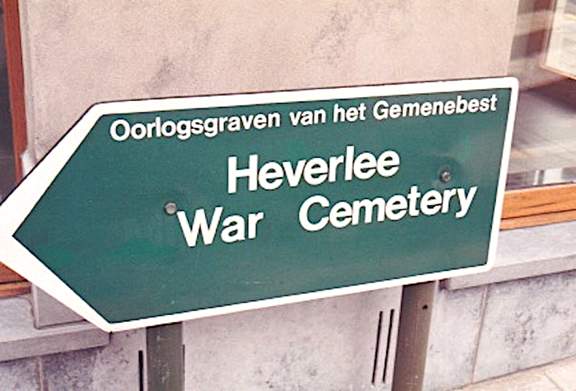 It had all started some months earlier. He was sitting in his office on Rue Alfred Dehodenq overlooking the UNESCO building. While he ate his lunch, he was thumbing idly through mail and magazines from India when he came to the article about Indian pilots who had been shot down during World War II and were buried in France and Belgium. He sat bolt upright immediately, his senses automatically alerted. A sense of history grabbed him. IAF pilots buried in Europe ? Where ? Who were they ?

And he paraphrased in his mind the words of Robert Brook’s “The Soldier” immediately – “That there is some corner of a foreign field that is forever India”.

Who were these young men, how had they died in operations ? Their families would have been devastated by the news. Were the families alive, had they visited the cemeteries, when, when last, did existing family members know, care ? Questions, questions, questions – no answers !

He took it on himself to find out. When he spoke to his boss, he was ridiculed. These cemeteries, he was told, were looked after by the Commonwealth War Graves Commission and immaculately maintained. He already knew that. He and his son had seen quite a few, and all such cemeteries were settings of extreme tranquility. One could walk reverently through the peaceful settings and read the tombstones, all the while silently wondering how young men, some still in their teens, had been called to duty and then sacrificed their lives for their country. The horror of it all !

He snapped back to the present. He told his boss he was aware; but had an Indian Air Force officer ever stood in front of the graves and paid tribute to those wearing similar uniform ? His boss could see what he was driving at and dismissively assented to his proposed venture.

He got down to the task he had set himself immediately. He wrote off to Hq, only to subsequently receive a typically disinterested, bureaucratic reply. Would anybody in his right mind really take the trouble to find out who these officers were and where their families were today ? After nearly five decades ?

But his queries to his counterparts in France received immediate and enthusiastic responses. He had his answers within a week. Not only did he have his answers, other Service Attaches were so enthused by his project that they too, were very willing and happy to assist.

The RAF Deputy Air Attache advised that a wreath of flowers would not last more than a couple of days and kindly volunteered to provide a synthetic wreath of red poppies. Payment terms were discussed and the promise of a princely sum of a few beers was suggested and agreed upon. True to his word, two wreaths arrived at the Embassy a few days before the planned mission. Cards for the wreaths were made out by his own staff at the office. They bore a simple message.

A few weeks later, being accredited to Belgium, he found time to visit the cemetery at Heverlee. 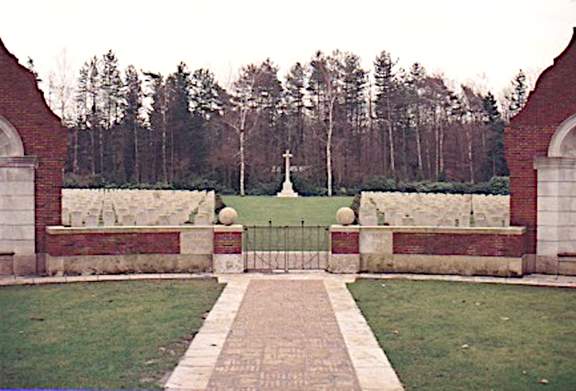 This time, the weather was milder. He had already done his homework and so he knew the precise location of the grave.

He was astounded to find that the top of the tombstone was inscribed in perfect Devanagari script. 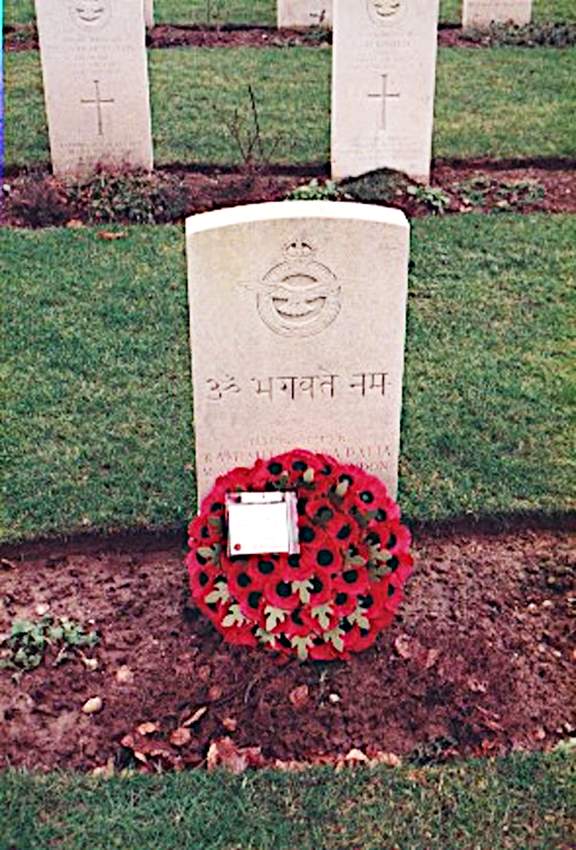 Below, the stone bore the details in respect of Fg Offr Romesh Chandra Datta of No 97 Sqn, RAF (VR) who was killed in action on the 9th July 1943. He was just 32.

As he had at Dieppe, so too at Heverlee. The task he had set himself was accomplished. It had given him immense satisfaction. 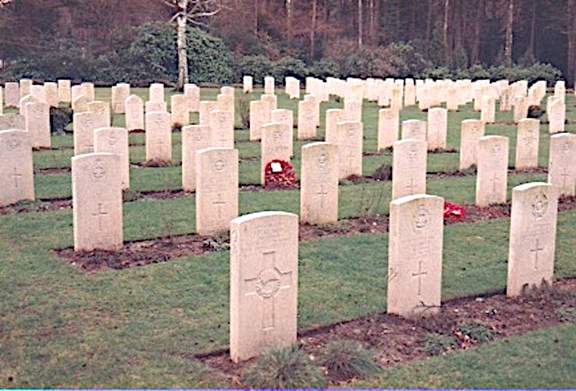 ……..A quarter of a century later, he and his wife met up with the RAF Deputy Air Attache, his wife and grown son at JW Marriott. He made sure the debt of 1995 was repaid many times over !

After this article was published – the family of Ramesh Chandra Datta got in touch with the editor of this site.  During the course of the correspondence, it emerged that Datta’s name was wrongly recorded by CWGC. The correct surname was DUTTA.  A request was filed with CWGC and evidence submitted in the form of Gazette entries as well as a copy of the RAF service record held by the family. In due course, CWGC confirmed that the records were updated to change the name to DUTTA, and a correction will be made to the original Grave marker.   The title of this article has been updated to reflect the correct name.