AVM Manmohan Bahadur writes about a recovery operation at 19,500 feet that saved a valuable Cheetah helicopter of No.114 Helicopter Unit.

The report about the recovery of an Indian Army Dhruv helicopter from Khanda, a post at around 16,200 feet on the Siachen Glacier, is wonderful news. Besides the fact that a flying machine has been recovered, it also gives great credit to the professionalism and bravery of the men and aircrew of Army Aviation who recovered the machine.

The news coverage took me back to my days flying in that most inhospitable terrain – rightly christened the highest battlefield in the world. While the aircrew have been in the limelight most of the time, it’s the technicians who have been the unsung heroes of Siachen ops. Now, heated hangars have been constructed, but just 10 odd years ago, the technicians would be up before dawn, in those terrible sub‑zero temperatures, to get the machines fly-worthy for early morning take-off. It was worse at the base camp, where your breath would freeze in winters on exhaling and the skin would be left behind on a metal part if touched with bare hands – but the technicians pressed-on regardless. If one may add for the uninitiated, this was routine day-in and day-out stuff on the glacier – and continues to this day since 13 April 1984 when Op Meghdoot was launched.

But the Siachen Glacier throws up different challenges off and on, of the kind that test resolve, technical expertise and guts. One such incident occurred on 3 June 1990 when a Cheetah of 114 Helicopter Unit (christened the Siachen Pioneers) flown by Flt Lt W.V.R. Rao and Fg Officer Suresh Nair had an engine malfunction on landing at Amar helipad situated at 19,500 feet (yes, you read it right, 19.5K feet); during those days, Siachen was a live battle zone with intense exchange of artillery fire. The aircraft just plonked itself on the matchbox-sized helipad (see photo of a typical Siachen helipad); the buddy helicopter recovered the crew, even as the Pakistani troops started shelling Amar, since the crew could not have stayed back overnight because they were not acclimatised. Then began the mind-boggling planning of how to change the engine at that altitude – never ever done anywhere in the history of aviation. 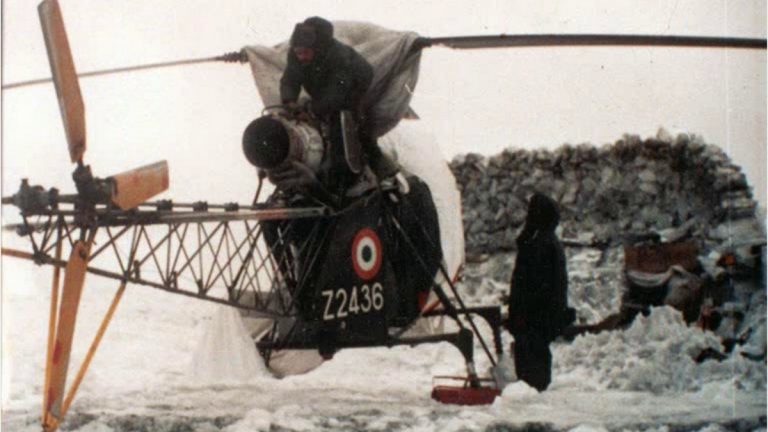 The unserviceable Cheetah Z-2436 that was stranded at Amar post.

The Cheetah engine weighs 182 kg and requires a portable crane to lift it out and install a new one. At the best of times, at the helicopter base, it requires expertise and workmanship of a very high order, besides many checks and double checks by supervisors. Also, the Cheetah can carry only between 25 and 75 kg of load to Amar due to the extremely reduced air density. To cut a long story short, the following events happened.

Amar was manned by troops of the Sikh Light Infantry. They manually removed the unserviceable helicopter out of the small helipad so as to make place for the incoming rescue helicopters. How they did this, at 19,000 feet without any equipment (the Cheetah has skids and no wheels), only God and those troops know. They made a snow wall ahead of the post so as to shield it from direct observation of the Pakistani post just two kilometres ahead.

There was no time to lose, so in the subsequent days, a technical team of IAF airmen under Flt Lt Gn. Sreepal was dropped off by a helicopter at a post at 15,000 feet for a shortened acclimatisation period. Some aviation fuel was pre-positioned in 20-litre jerry cans at Amar, while in the helicopter carrying the replacement engine it was planned to be kept at the bare minimum to reach there. Wg Cdr Mahendra Goli, the Commanding Officer, flew the mission after a week (around 10 June) to transport the engine. To carry the 182 kg engine, the Cheetah was made light by removing its tail rotor guard, rear seats, side panels, doors and after the aircraft was started up – the battery itself.

The crew had no radio contact with anyone else thereafter, and could not have re-started their own engine if it failed mid-flight. Wing Commander Mahendra Goli landed at Amar, and on hearing the helicopter noise, the Pakistani post started firing. The engine was offloaded and 20 litres of fuel put in simultaneously from a jerry can; and while this was going on, artillery shells started falling around (thank God for the snow, for the shells just go in, unless it is a direct hit). Luckily, there were no hits and Wing Commander Goli came back after the offloading.

Flt Lt Sreepal and his team, who had been positioned by another helicopter at Amar, started removing the engine with the portable crane. Due to the extreme cold, the metal had become brittle and it broke. Now, the Sikh Light Infantry soldiers and the IAF team removed the engine off the helicopter and put the new engine in it with their bare hands – once again, no words of praise can be sufficient for those brave IAF technicians and Indian Army jawans. And, by the way, they worked in the evening and night, at 19,450 feet – just Google and see what are temperatures at that altitude are and throw in a wind chill factor. Additionally, while even walking at those altitudes is a task due to lack of oxygen, these men changed an engine that required opening tightly wound nuts and bolts, disconnecting pipelines while ensuring proper alignments – and the reverse for mounting the new engine. And the IAF airmen had gone in there with a shortened acclimatisation schedule, a sure recipe for fatal high-altitude medical emergencies.

On 13 June 1990, Sqn Leader A.K. Sinha and Flt Lt O.J.S. Malhi were dropped at Amar for the retrieval. After a quick visual inspection, and as he says, “with a prayer on his lips,” he vented the engine and put the switch to ‘start’. And it started in one go – at that altitude. In normal operations, the engine would have been allowed to be run and additional checks would have been done. But this luxury was not available because the noise would have activated the Pakistani troops. He just ‘engaged’ his rotors and took off. Back at base camp, in A.K. Sinha’s words “it was sheer bedlam” when he touched down – pure ecstasy at having pulled off an engine change and a safe recovery of a helicopter from 19,500 feet. A world record for sure, not beaten to date – how are we so sure? Simple, because such helipads are only located in India.

It is a different class of people who operate there – the Indian Army jawans, the aviation technicians and the aviators. If these people have a bit of swagger – give it to them.

And above all, God is working overtime for each one of those brave Indians operating on the Siachen Glacier and keeping them safe from evil intentions. 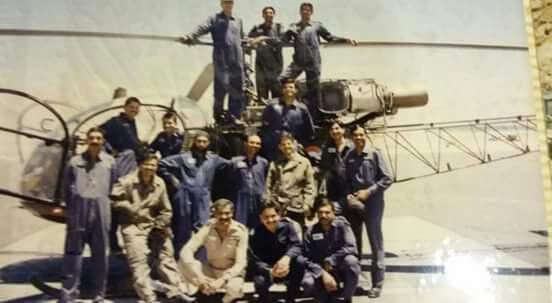 The Pilots of the Siachen Pioneers - 114 HU, with their CO Wg Cdr M Bahadur

AVM Manmohan Bahadur (retd) has served two tenures in the Siachen Pioneers – first as a Flying Officer between 1978 – 82 and then as the Commanding Officer from 1994 to 1997. He was the co‑pilot on the first landing on the Glacier – 06 Oct 1978. This article was first published in The Print . Reproduced here with Permission.