Air Marshal Vinod Kumar “Jimmy” Bhatia, PVSM AVSM VrC Bar , 6497 F(P) was the Air Officer Commanding-in-Chief during the Kargil conflict. A veteran of two wars against Pakistan – he was one of the few senior ranking officers to fly operational missions during the Kargil Conflict in 1999. This is his story of how Central Air Command utilized the MiG-25 Foxbat in a photo recce role at a profile for which the aircraft was not designed for.

Air Marshal Vinod Kumar “Jimmy” Bhatia, PVSM AVSM VrC Bar , 6497 F(P) was the Air Officer Commanding-in-Chief during the Kargil conflict. A veteran of two wars against Pakistan – he was one of the few senior ranking officers to fly operational missions during the Kargil Conflict in 1999. This is his story of how Central Air Command utilized the MiG-25 Foxbat in a photo recce role at a profile for which the aircraft was not designed for. 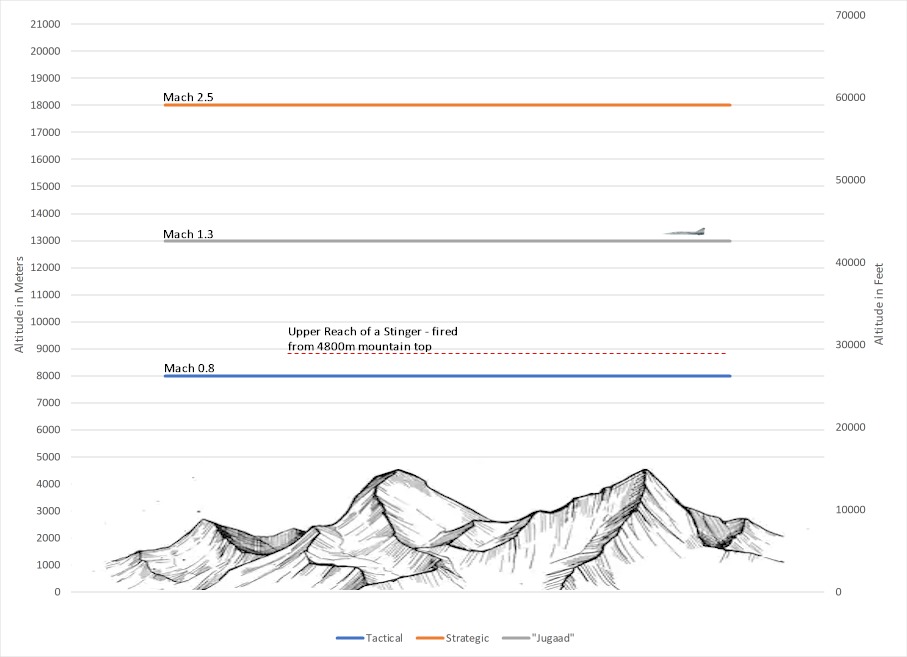 A chart showing the approved “Profiles” of the MiG-25 Operations – and the “Jugad” profile that Central Air Command had to come up with just for Kargil – flying at Mach 1.3 at an altitude of 42000 feet would put it above the range of the Stinger missiles that could be fired from the mountain tops.

The very next day, I flew to Bareilly from where a two-seater MiG-25 was waiting for me with loaded cameras to try out the experiment. I was in the front cockpit in the nose section of the massive aircraft. The sortie was flown as planned; with throttles retarded to min reheat stops at 13 km height. The aircraft settled down at Mach 1.3 in a stable flight with engines purring smoothly. We flew for quite some time to check the engines’ behaviour when flying with min reheat for prolonged periods. When fully satisfied with theIr stable operation, we landed back at Bareilly. The Sqn gave me an album of photographs which had been taken earlier during practice missions flown on the single-seater with cameras at 8 km AGL to demonstrate the kind of resolution which was possible, that would enable interpretation of even heavily camouflaged targets, such as ‘Sangars’ on the Kargil sector’s icy heights.

The album was shown to the Chief in Delhi the same evening while confirming the viability of the rather unusual but utterly safe mission profile. This cleared the way for the Foxbats to be gainfully utilised for PR missions during the Kargil War. The rest, as can be confirmed by the photographs adorning the walls of the ‘Operations Room’ in Western Air Command (WAC), is history.

Jimmy Bhatia’s Logbook excerpt  showing the entry for the MiG-25U sortie flown on June 17th, 1999. The aircraft being DS-361 with Wg Cdr P K Sharan in the front cockpit. After retirement Foxbat DS-361 is currently on display at Air Force Station Kalaikunda.

Close up of a MiG-25 two-seater – this example being DS-362 now on display at Air Force Academy in Dundigal.

This article was first published in “India Strategic” magazine. Reproduced here with the Author’s permission

Editor’s Note:  We have received various queries on this article that we feel compelled to explain – In the article, the author gives details of a “Proving Flight” over Barielly area – and not actually over the Kargil Battle area. Additionally, the claim that the MiG-25U took photographs is still in contradiction with what we know about the type – that the two-seater does not carry cameras.

Additionally, the photo caption on DS-362 originally claimed there was a Camera Port on the Trainer variant. The “Port” under the cockpit is actually that of light.  That caption identifying it as a camera port is a mistake by the editor of this site.

The following comments were made on an earlier version of the article by Air Marshal Sumit Mukerji (who is quoted in the above article). They are reproduced below to add clarity to some of the aspects: