The old warhorse, after completing four eventful decades in the IAF, is still going strong. Efforts are on to enhance its capabilities to enable it to serve the nation for yet another decade. Till date no aircraft in the IAF with the exception of a couple of Sukhoi-7s from the 1971 War have ever  survived a missile hit. The Canberra aircraft has achieved that milestone too. On 21 May 1999, prior to the commencement of the Kargil conflict, the Air HQ assigned the Canberra PR aircraft a photo mission task near the LoC (Line of Control). 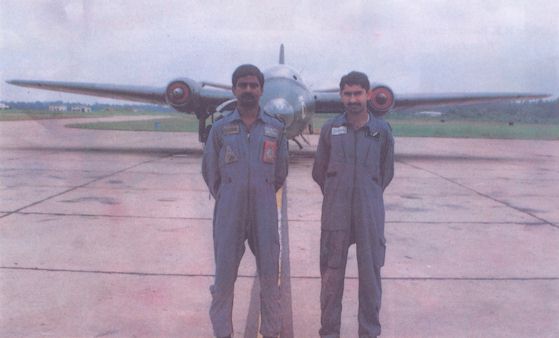 Sqn. Ldr. A. Perumal (left) with his navigator - Sqn. Ldr. U.K. Jha with a Canberra aircraft from the Squadron

The area of operation covered Drass, Kargil and Batalik sectors. I was detailed to fly the mission along with my navigator, Squadron Leader U.K. Jha. After a thorough study of the area and the restrictions on our manoeuvering posed by the proximity of the LOC, we proceeded for the mission as planned. Over Batalik sector I experienced a violent jolt and explosive thud. I realised that we had been hit by ground fire. Immediately easing up, I checked the aircraft handling and the health of the engines, simultaneously asking the navigator to get back to his seat, strap up and be ready to abandon the aircraft. The aircraft was yawing to the right and was not building up speed.

On the other hand, the bird was still up in the air and flying, posing no problems in handling. After a short discussion with the navigator, I decided against ejection and instead planned to divert for a landing at the nearest airfield at Srinagar. I turned towards Srinagar and initiated a slow descent so as to increase the speed to maintain control of the aircraft. We were now flying over snow-bound mountains on an average height of 2000 ft.

Our confidence was boosted by the presence of escort MiG-29 which were formatting with us. As our R/T had packed up I could not communicate with them and ascertain the extent of damage to my aircraft. As we cleared the hills and entered the valley, my confidence level rose further and I checked out the aircraft behaviour at slow speeds with more confidence. Subsequently I executed a safe landing at Srinagar.

Canberra IP990, seen here landing at Yelahanka in 2005 was the same aircraft hit by the Stinger Missile during Kargil. The aircraft was sadly lost in an accident two years later. (Photo by Simon Watson)

Wg Cdr  Alagaraja Perumal is a recipient of the Vayusena Medal in 1997 for force landing a Canberra aircraft under difficult and trying circumstances. His sortie in the Canberra was one of the first undertaken during the Kargil Conflict. His aircraft was claimed shotdown by many Pakistani sources. This account first appeared in a recent issue of SAINIK SAMACHAR under the name "My Experiences in the Canberra".

Alagaraja Permual took premature retirement from the Air Force as a Group Captain and took up flying in Civil Aviation. On 6 January 2012, he passed away due to a heart attack.