Here’s the next, and perhaps the last, chapter in the annals of the B-24 Liberator, HE773 – The Reluctant Dragon.

In 2003, my Dad, Don Michael, heard about the Liberator the IAF had donated to the Canada and recalled having flown Libs based in Pune [what was then ‘Poona’] while squadron commander [‘Easy’ Squadron] at the National Defence Academy in Khadakvasla. He checked his logbook and, lo-n-behold, found he’d flown HE773 almost 50 years ago in Sept 1956!

The next time he was up from Toronto, August 2003, visiting us in Ottawa, we contacted the curator at the Canada Aviation Museum and mentioned how Dad had flown one of the museum’s exhibits and had the logbook entry to prove it. The curator invited us over and said they’d be delighted to meet him and show him around the venerable B-24.

The aircraft had been moved indoors and occupied a prominent position among the WWII international ‘warbirds’ that range from a Spitfire, Hurricane, Beaufighter, Mosquito, Lancaster, Mustang to a Me 109, Me 162 and Heinkel 163. 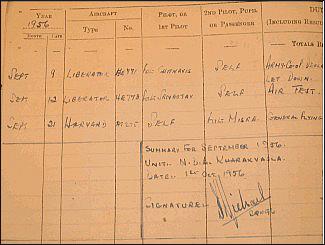 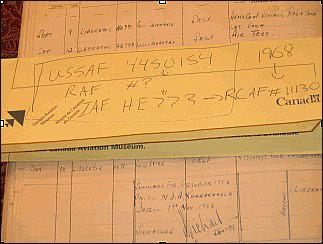 Logbook entry dated 12 Sept 1956 shows an Airtest on HE-773 done by Wg Cdr Don Michael. On the right is a list of various identities that HE773 served in over the years.

When we arrived, staff members quickly validated that the logbook entry tallied with their exhibit. They were more than a little in awe at the history represented by the logbook and the range of aircraft flown. They were even more impressed when they heard that Dad was still an aerobatic flyer at 77, albeit on single-engined Cessnas. They mentioned it was only the second time in the history of the museum that an actual former pilot of one of their exhibits was still a licensed flyer!

Though the Liberator had been cordoned off to the general public because of maintenance work being done on it, the staff member assigned to take us around mentioned that special permission had been given for us to get beyond the protective barrier, climb aboard and explore the aircraft.

As you can well imagine, it was quite something for Dad to sit in the cockpit of an aircraft he’d personally flown half a century before – continents away. Here are some pictures that may evoke memories in others who may have flown the ‘ Reluctant Dragon’

Needless to say, a visit to the Lib has become a feature whenever we visit this wonderful museum or have friends or family who are aviation buffs up on a visit.

Interestingly enough, on a subsequent visit, one of the curators who remembered me from an earlier occasion allowed me to crawl under the aircraft and showed me a stenciled inscription inside the front undercarriage bay from her IAF days. It evoked a number of possibilities and rather cryptically read, ‘SHE WAS A RELUCTANT DRAGON’.

Any takers on the story behind the caption??

Editors Note: For a more detailed story on the Liberator HE-773 and the story of its flight to Canada, read the article at the Warbirds of India Overseas Liberators Section

Copyright © Darryl Michael . All rights reserved. Reproduction in whole or in part in any form or medium without express written permission of Darryl Michaelis prohibited.