Air Cmde PD ‘Jeya’ Jeyasingh 10923 F(N) passed away at 2330 hrs on 18 Oct 2018 at the Command Hospital Air Force Bangalore. He was admitted on 05 October after being diagnosed with pneumonia and other complications.  He was veteran of the 1971 war, who flew on bombing sorties with the Canberra bombers.  He was also known as an old comrade who refuses to let the nation forget about his comrades.  K S Nair writes about the annual commemoration that  Air Commodore Jeyasingh started – and which continues today even in his absence.

Air Cmde PD ‘Jeya’ Jeyasingh 10923 F(N) passed away at 2330 hrs on 18 Oct 2018 at the Command Hospital Air Force Bangalore. He was admitted on 05 October after being diagnosed with pneumonia and other complications.  He was veteran of the 1971 war, who flew on bombing sorties with the Canberra bombers.  He was also known as an old comrade who refuses to let the nation forget about his comrades.  K S Nair writes about the annual commemoration that  Air Commodore Jeyasingh started – and which continues today even in his absence.

Late in October this year I wrote an obituary to Air Commodore Daniel Jeyasingh, a distinguished IAF navigator and veteran of the 1971 war. Some of those who knew him have asked me to supplement that obituary with an account of something he took on in the year or so following the war. A simple story, it involves no public glory or benefit to him, but says much about the kind of man he was – and the kind of institution the Indian armed forces are.

For two years before the 1971 war, and for nearly four years after (an extraordinarily long tenure in a single unit), Daniel Jeyasingh served with No 16 Squadron of the IAF, flying Canberra bomber-interdictors. During the 1971 war the squadron, led from the front by its already legendary CO Wing Commander P Gautam, rendered spectacular service, flying over 70 sorties within the first six days of the war, striking targets in both the Eastern and the Western theatres by both day and night, and adding to the stories around and decorations worn by its personnel. Jeyasingh himself flew over a dozen sorties during the war.

On 15th December, the last day of fighting in the Eastern Sector, less than an hour before the ceasefire announced by then-General Manekshaw, the squadron lost one Canberra and its crew, Flight Lieutenant Brian Wilson and Flight Lieutenant Rohinton Mehta, over Kurmitola Cantonment in East Pakistan.

All wartime losses are tragic but there was much that was particularly poignant about this particular loss. After hostilities ended, Wg Cdr Gautam pressed for an IAF team to go to Bangladesh, and exhume the crew’s remains, which had been buried with care by grateful Bangladeshis. They were cremated, and the ashes brought back in two urns, by hand of an officer, to the squadron. Jeyasingh, by then the adjutant of the squadron, took custody of the ashes.

Wg Cdr Gautam then took it on himself to ensure that benefits were settled in favour of the next-of-kin. Tragedies notwithstanding, Flt Lt Wilson’s benefits were settled in relatively quick time and  straightforward manner. Wilson had got married in 1970, and had had a baby girl just before the war broke out. Wilson’s father was himself a Colonel, and his father-in-law a professor in Jodhpur. Between them the family organised an appropriate burial of his ashes. Jeyasingh and another officer represented the unit at the funeral. And the squadron’s duty to one of its fallen members was done.

Flt Lt Mehta’s case, however, was more of a challenge. He was single, and his aged parents would simply not accept that their son was no more. The first telegram to them after the loss had said, as was usually the case if death had not been confirmed, that Mehta was Missing in Action, and they clung to that wording.

Wg Cdr Gautam himself, although posted away from the squadron by then, visited Mehta’s parents, to try and convince them. The squadron had hoped to bury Mehta’s ashes in his parents’ home town of Hyderabad, but even Wg Cdr Gautam could not persuade them. He himself was lost in a MiG-21 accident in late 1972. And there matters lay for some time.

The urn containing Mehta’s ashes remained with Jeyasingh, in his capacity as squadron adjutant, for what he describes as “a long long time.” And then, Mehta’s sister visited, from the UK. Following long discussions with Jeyasingh, she authorised him to bury Mehta’s ashes where the squadron was based – in Gorakhpur.

The nearest Parsi Tower of Silence was in Lucknow. But Mehta’s sister told Flt Lt Jeyasingh, “My memory of my brother is Gorakhpur, I want it in Gorakhpur.”

So the squadron approached a local church for a burial plot. It was not straightforward, as Mehta was not a Christian, but eventually Flt Lt Jeyasingh persuaded them to agree – or, by some accounts, to turn a blind eye while the burial was done by the squadron.

And so it is that the ashes of Flight Lieutenant Rohinton Mehta, were buried in a gravesite in a church in Gorakhpur, and the location is marked by a marble plaque. The site remains there. And fittingly, every year, No 16 Squadron Indian Air Force, now flying SEPECAT Jaguars, still conducts a memorial for Flight Lieutenants Wilson and Mehta, at the site. 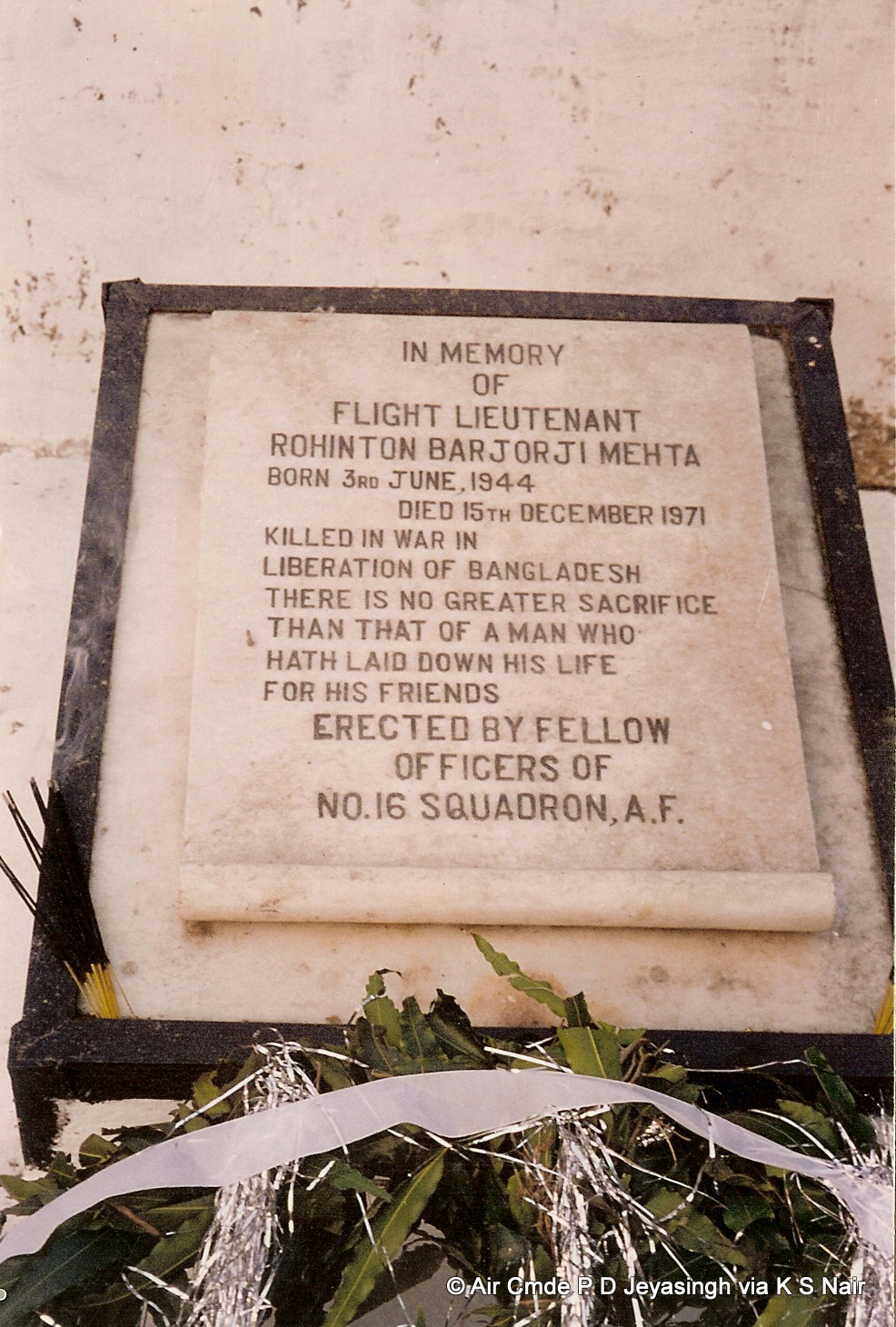 The grave site marker erected by 16 Squadron – where Flt Lt R B Mehta’s ashes are interred.

In 2009, the long-retired Air Commodore Jeyasingh told me, “Till two years back, every year, 15th of December, I used to go. … After coming to Bangalore, I have been a little lazy. But – the squadron does the honours. 15th of December. [Sometimes] they need to be reminded.” He laughs.

And he adds, tellingly, “In fact – the Air Force was also very kind. When I was in the squadron, they used to give me an aeroplane. Training, Cross-Country. Go to Gorakhpur, … do this. As long as I was in flying units. [Even when I was in] AEB … Subsequently when I was on the ground, I used to ask my Boss and – most times, the moment the reason is explained, Boss will say, Go on duty. So I used to go. 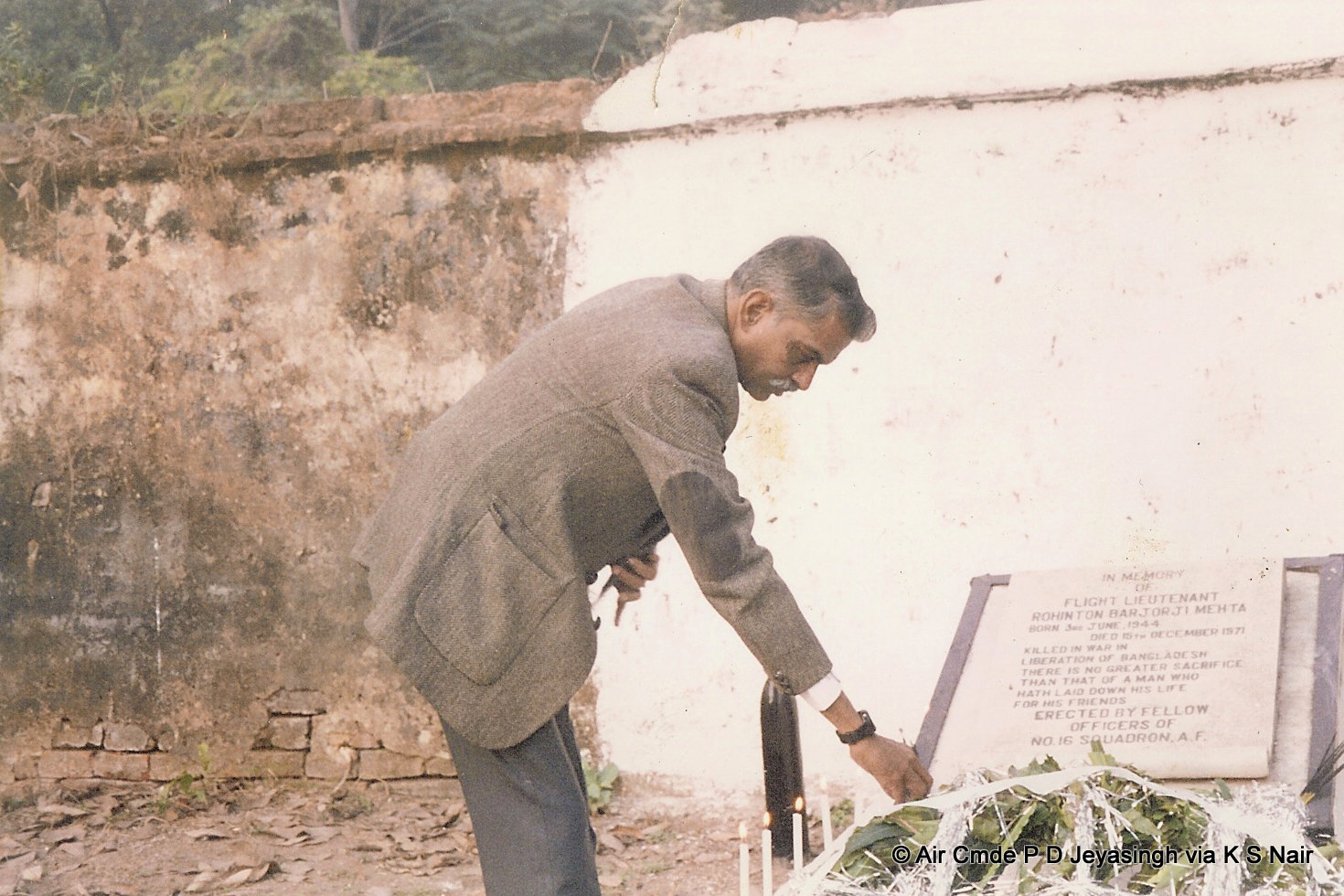 And indeed, as far as we know, every year on the 15th of December, one fateful day before Vijay Diwas, No 16 Squadron of the Indian Air Force – and indeed, Air Force Station Gorakhpur – organise a small ceremony to remember two brothers-in-arms who gave their lives in one of the century’s last just wars. 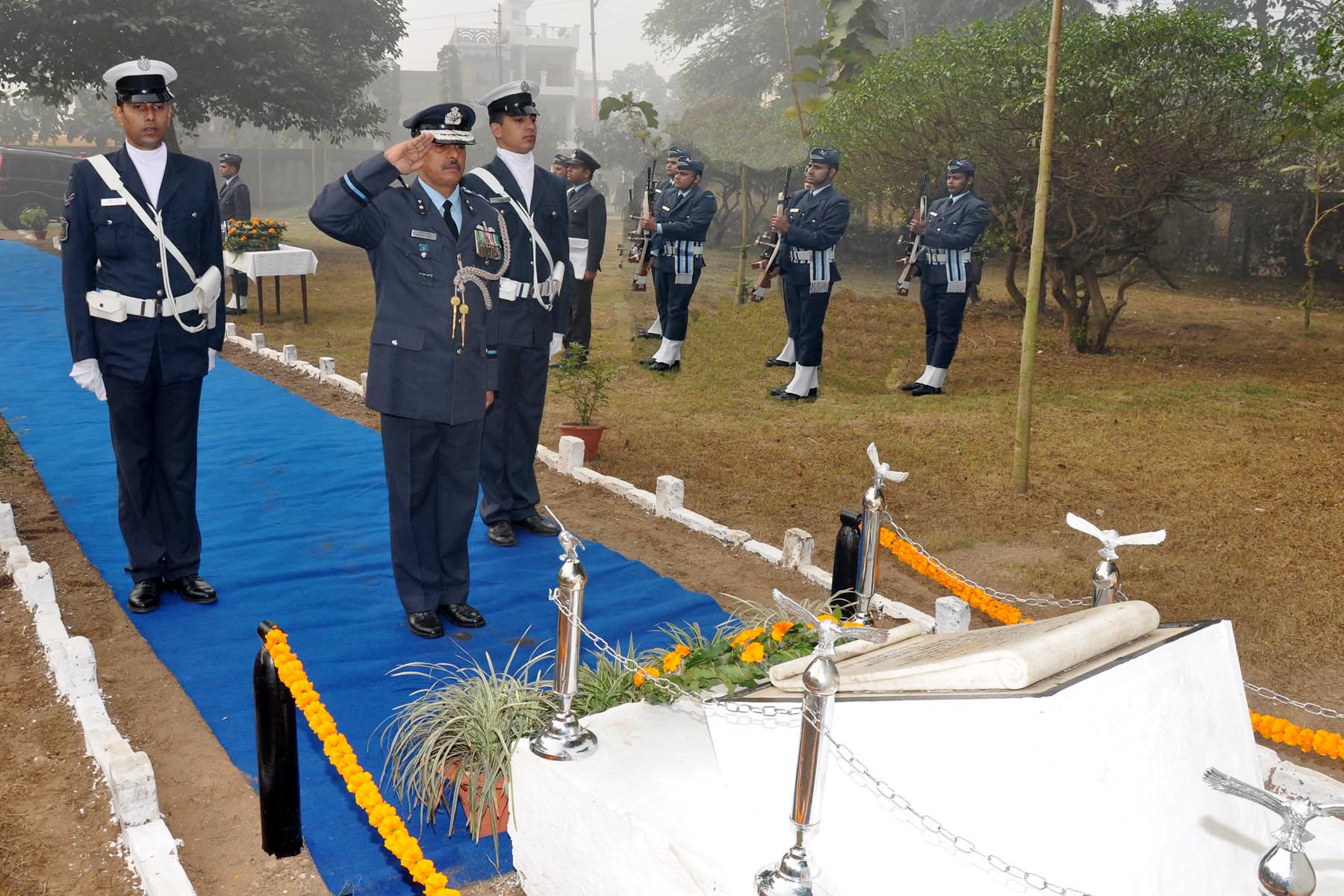 c 2013, then AOC Gorakhpur, Air Cmde Anil Golani paying tributes at the resting place of R B Mehta’s ashes.  The ceremony is now a regular event on every 15th of December at Gorakhpur. 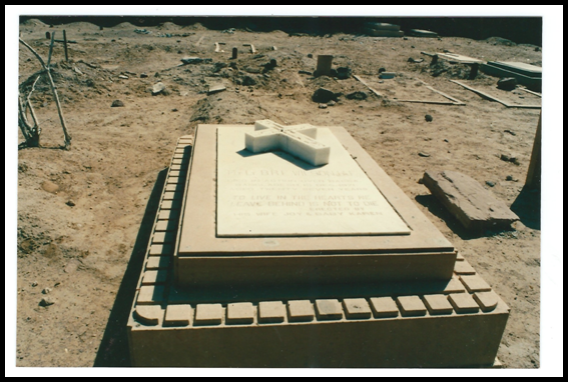 While R B Mehta’s ashes are interred at Gorakhpur, his pilot and compatriot Brian Wilson’s remains were interred in a cemetary in Jodhpur.  A period photograph shows marble slab and cross adorning the grave.  [Photo Courtesy: Mrs Wilson / Canberra Bomber Association]