This contribution by Wg Cdr B C Karambaya, 10604 F(P)  was originally written as an appendix to Gp Capt H K Bajaj's Battle of Chhamb 71 : Through the 6/5 Lenses of an FAC . Then Plt Offr Bajaj operating as an FAC Was controlling the formation, Mission 521 - for a strike against Pakistani Army targets in Chhamb Sector.   Wg Cdr Karambaya, then a Flying Officer, had flown two Counter Air Sorties earlier in the war and was credited with destroying a heavy transport aircraft at Chaklala. He was awarded the Vir Chakra for his contributions. 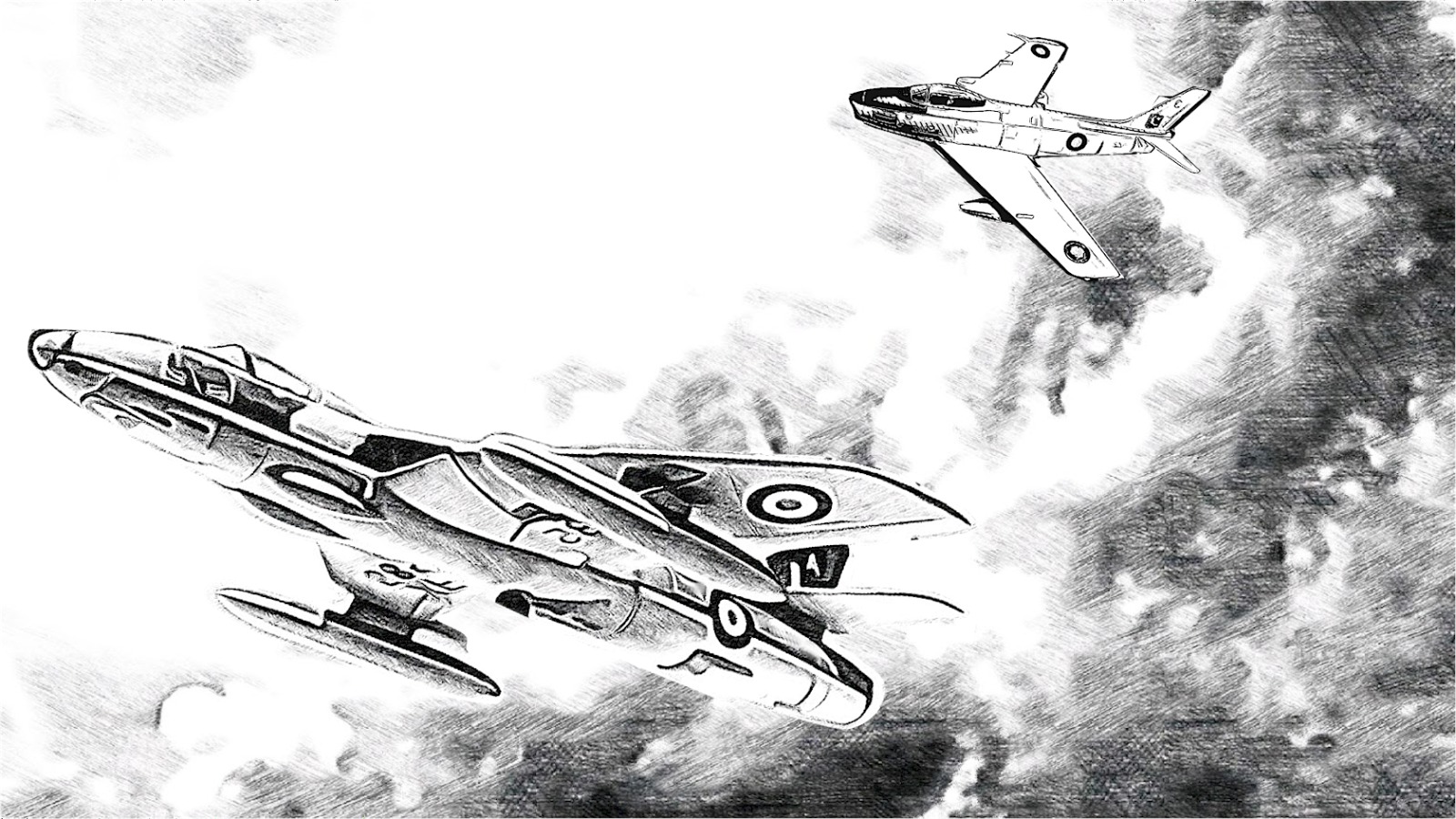 No 20 Sqn, based at Pathankot, was tasked to provide close air support to the Army in Chammb Sector, as our troops had been pushed to eastern banks of the Munawar Tawi.

Sqn Ldr R N "Mummy" Bharadwaj and self were detailed for this sortie by the CO, Wg Cdr C V Parker;  Time over Target (TOT) was at 0730 hrs on 10 Dec 71. The aircraft was loaded with full HE ammo for front guns, 230 gal inboard drop tanks on the inboard pylons and SNEB Rocket Pods, with 19 rockets in each pod, on the outboard pylons.

We came back to the Squadron, prepared our maps and Mummy briefed that we would fly at 500 ft AGL at 360 Knots (kts) till IP in line abreast formation and then accelerate to 420 kts to the target.

We went to our aircraft, which was loaded and ready; started and took off as per plan. I got into 800 yds, line abreast position. After flying for about 10 mins, we started to enter the morning mist haze and visibility had reduced drastically. I moved into starboard fighting and I saw Mummy giving me thumbs-up sign.

We reached the IP and accelerated to 420 kts and Mummy on r/t called, ‘Linda Control’; and we got a correct response of our mission number. The FAC told us “Seek and destroy at will, troops and tanks concentration in Chammb Village”.

We reached the target area and the FAC called up and said we were over the correct area. Mummy threw in a left hard turn and entered into a left orbit. I had a tough time holding starboard fighting position, scanning for enemy aircraft and looking for tanks / troops concentration. I informed Mummy that I was dropping back into a circle of joy position, which he okayed.

We were orbiting at 420 kts, height at about 300-500 ft AGL. During one such orbit, passing a westerly heading, I saw a small rivulet from the Tawi flowing westwards and in this rivulet, I saw two tanks and three open trucks with long crates in them, possible ammo for the tanks.

At this moment in time, three things happened simultaneously, I took my eyes off the tanks, to look for Mummy, when a Sabre flew between us and then I gave a call to Mummy ‘ Sabres in between, hard port, GO ‘ Instantly, I looked for the No. 2 Sabre and there he was climbing in the mist haze, 300 yds from me, firing his six cannons at me.

I took off bank, or I would have flown into his full salvo. He whizzed past me, Meanwhile Mummy gave a call that he had no visual contact with me. I told him that I had been hit and streaming fuel. My aircraft’s leading-edge was punctured and so was the port 230 gall drop tank, both streaming fuel.

I was now flying a northerly heading and suddenly I remembered “where is the No 1 Sabre’. I looked to my right and behind and there he was, 20 degrees angle off and about 400 yds, I gave a call to Mummy that I had a Sabre on my tail but he still had no visual contact with me. I threw in a hard starboard and I could feel his bullets hitting me on my tail and rudder. I then decided to climb slowly, to get out of the mist haze and not drop my speed below 350 Kts. I continued in a right orbit and whenever the Sabre got into a firing position I would turn tight, with two notches of flaps and he would slip out.

I continued turning, climbing and turning tight as and when the Sabre got into a firing position. I cannot recollect how many orbits I must have done but at about 5000 ft, indicated, we came out of the mist haze. I was also talking to Mummy all this time and then Mummy called he had visual contact with me 3000 yds, starboard, closing in. I told Mummy I am disengaging and heading eastwards diving, to which he said OK.st

On a 090 degree heading, I put the aircraft into a steep dive, fired the rockets pods randomly to reduce the drag. In the rearview mirror, I could see the Sabre falling behind. I saw a hill feature and dived straight for it and at the last moment jinked to the right to avoid it and levelled out at deck level. Again in the rearview mirror, I could not see the Sabre. I think I lost him.

I then changed course on DR for base and with help from ATC and the SU at Amritsar, I landed back safely at Pathankot. I did not jettison my drop tanks & was never on fire. On switching off and inspection of the aircraft I found that I had been hit on the leading port edge, 230 gal drop tank left and right side of the rear fuselage and rudder. Later, the Tech team did bring to me a couple of ball ammo bullets taken from the engine casing.

After he spotted me streaming fuel, he started to close in when he saw me starting to dive and saw the Sabre following. When I jinked at the hill feature, he saw the Sabre turning port; presumably, he lost me and decided to head back to his country. Mummy closed in rapidly and at a very high overtaking speed and at about 400 yds, cross on the Sabre, he opened fire. The Sabre disintegrated and Mummy flew through the debris. On seeing his film on normal speed, we can see the full Sabre and next moment you are covering your head when you see the debris flying past. 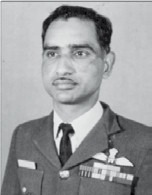 Sqn Ldr R N "Mummy" Bharadwaj 5001 F(P) received the Maha Vir Chakra, One of the only two Sqn Ldrs from the 71 war to receive this award. He retired as an Air Marshal after a distinguished career including serving as an AOC-in-C of Southern Air Command.

Fg Offr B C "Lofty" Karambaya 10604 F(P) received the Vir Chakra for his contributions in the war.  He had flown two Counter Air Sorties earlier in the war and was credited with destroying a heavy transport aircraft at Chaklala.  He retired as a Wing Commander.

The Pakistani Air Force Pilot of the F-86 Sabre was Squadron Leader Muhammad Aslam Choudhary  (PAK/3888).  Born 14 Nov 1937, he had 12 years of service with the PAF and on the morning of Dec 10th, was part of a two aircraft formation to attack ground targets.  After being hit by R N Bhardwaj's Hunter, Aslam Chaudhary tried to bale out (unsuccessfully) from his stricken F-86 Sabre over Indian territory.  Pakistani sources do not indicate that a funeral took place, implying he is still missing.   He was survived by his wife Mrs Bushra Parveen and three children. The Govt of Pakistan had conferred the "Sitara-e-Juraat"  (Star of Courage) posthumously. (Info courtesy : Sentinels of the Sky)