Stuck on the runway during a Mirage strafing attack!

" JANAK", the voice on the RT was strident with urgency, â€œMirages attacking. Get off the runway". Seconds later, amidst the sight and sound of bombs exploding and 30mm DEFA cannon firing, two sections of two Mirage IIIs of the Pakistan Air Force (PAF) swept overhead Pathankot airfield along the runway in a southerly direction, turned hard right with afterburners blazing and headed for the safety of the Indo-Pak border. Later in the day, Pakistan Radio was to announce that two MiG-21 aircraft of the IAF were destroyed on the ground during a daring raid on Pathankot airbase in which the runway and the taxi tracks were damaged and rendered unusable. The facts however, were different and this is the story of an IAF mission during the Indo-Pak war of 1971 which did not get airborne.

It all began on 4th November 1971 when a detachment of 4 pilots and two MiG-21 air superiority fighters loaded with 2 K-13A air-to-air missiles and a 23 mm GASHA gun in an underslung gun pod were relocated to Pathankot from Chandigarh, the base of their parent squadron, No 45. The detachment Commander was Sqn Ldr Keith Lewis and the other pilots were Sqn Ldr 'Baby' Sehgal, a short, stocky bundle of immense energy and fighting spirit; Fit Lt Surjit Singh, a tall tough son of Punjab who had never before experienced the sound of guns fired in anger; and Fit Lt 'Bhadu' Bhadsavle, a quiet, unassuming officer who went about his job with the minimum of fuss or show. The detachment commander, though posted to 12 Wing, was chosen by AOC Chandigarh, Air Cmde E Dhatigara, to lead the detachment. Four totally different men were hard to find, but the nature of their task and the close confines of the underground Operations Readiness Room (ORR) at the southern dumbbell of the North South oriented runway (01-19) was soon to weld them into a cohesive team for the one month they spent together on two minutes cockpit readiness in their MiG-21s. But that is another story!

Exactly one month later on the 3rd December 1971, though they were not to know it then, war was about to start with a series of counter air attacks by the PAF on selected lAF air bases. The detachment, rather inexplicably, was ordered back to base and it was amid much speculation that 2 MiG-21s and an AN-12 landed at Chandigarh with the entire detachment and its equipment aboard. At dusk that evening the warbling note of the air raid sirens shattered the evening peace and heralded the start of the 1971 conflict in the sub-continent. The ORR at Chandigarh was bustling with excitement, activity, and to be honest, apprehension as to what lay ahead. It was soon to become clear that the PAF had mounted the classic pre-emptive counter air attack against the IAF and whatever their belief is regarding the results, it was abundantly clear to the IAF that their surprise raid had resulted in dismal failure.

The Amritsar detachment of 45 Squadron (Sqn) which also returned that evening had a narrow miss - the AN-12 transport support aircraft had just taken off when Amritsar was struck by the PAF! Either they hadn't seen the large Antonov or they ignored it, though the latter act is hard to imagine, but whichever way it was, this was the closest of shaves for the transport crew who obviously hadn't bargained for almost getting mixed up in " dissimilar aircraft combat" with the PAF! That all the lAF's forward airfields were undamaged and fully usable was established for posterity when all MiG-21 detachments were ordered to fly back to these bases and to mount the Operational Readiness Platforms (ORPs) immediately on arrival. The 45 Squadron detachment returned to Pathankot, with Sqn Ldr Denzil Keelor replacing FIt Lt Bhadsavle and the detachment was back in business on the 5 December 1971. The task for the detachment had crystallized into three distinct roles, viz:

The detachment was, in the next few days, to build up to a half squadron strength with 10 pilots from many different units so much so that it was jokingly referred to as the " MiG Club", and that was the sign which adorned the entrance to the ORR. The names of the officers who manned the Pathankot detachment and the units they hailed from are recorded here for posterity:

The particular sortie, which is the subject of this article, was preceded by a deduction by Surjit, the master analyser of the political situation, the disector of the higher direction of war and, at a lower level, the all knowing perceiver of the tactical situation. He affirmed with all the confidence of a self proclaimed prophet that the PAF would think twice before attacking Pathankot again by day. In fact, he went a step further and asserted -that the MiG presence at Pathankot had put a complete stop to Mirage counter air attacks and that the enemy would not venture near the airfield again. In the event he was proved wrong not once, but twice, in successive days first on the 9th December 1971 at 1515 hours followed on the 10th December 1971 by a forenoon attack at 1118 hours by Mirage IIIs, no less! 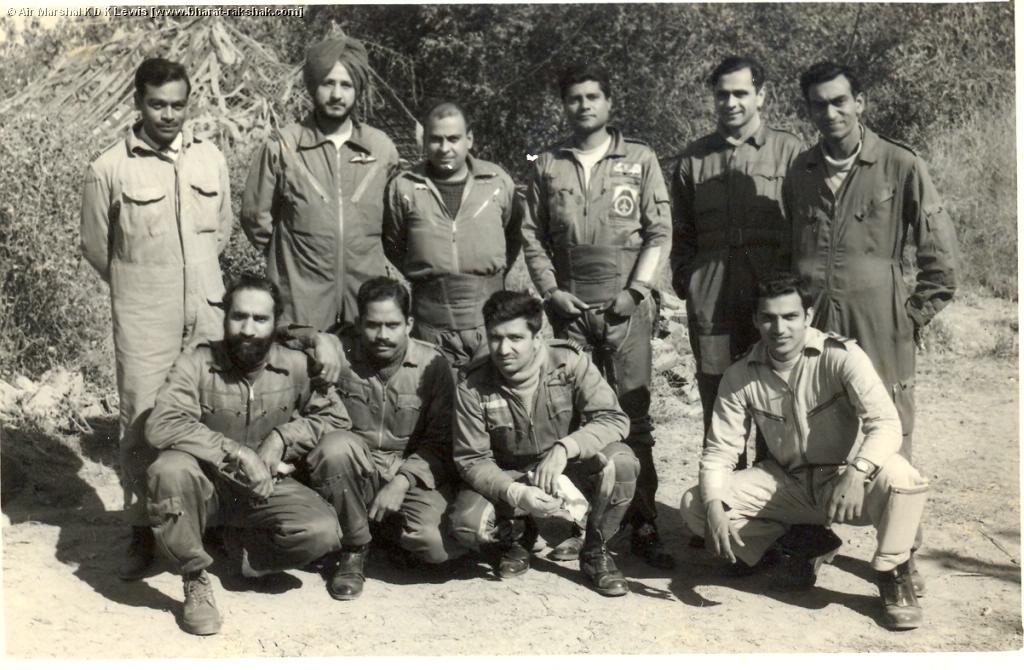 The sortie itself was the result of much planning and briefing between the Gnat and the MiG pilots in search of a method to intercept raids emanating from the Bulge whose distance to Pathankot was so close that early warning was insufficient to permit reporting, decision making to scramble aircraft, and the actual scramble itself. Air Cmde LM "Baba" Katre, known as the Warlord of Pathankot, because he was running the war for the base even though it had a resident station commander, was persuaded by Keith Lewis and Wg Cdr "Dolly" Yadav, Baba's senior operations officer, that a combined offset Combat Air Patrol (CAP) by two Gnats and two MiGs flown between the expected egress point of the Mirages and the airfield would, if nothing else, break up the integrity of the attacking formations. Of course, the aim was clear - to bring down a Mirage III E of the PAF in the last of the great duels between fighting men - in hard, clean, air combat pitting individual skills and much vaunted aircraft performance against each other, high above the ground battle, in a maze of high "g", gut-wrenching manoeuvres seeking a position of advantage and a kill.

The first take off time of 1015 hours had to be postponed to 1215 hours and once again to 1515 hours due to an irritating unserviceability of one of the Gnats. Sqn Ldr "Honky" Mukuty who was the Gnat flight commander came in for much light hearted prodding to get the aircraft serviceable. Finally he rang up at about 3 o'clock to enquire whether 1515 hours was suitable because his aircraft were now ready. Keith Lewis and Janak Kapur were the two MiG pilots programmed for the sortie and they proceeded to the blast pens with the flow of adrenalin starting to pump through their veins in that manner to which all fighter pilots are accustomed. Preflight checks over, they jumped into their respective cockpits and with some care checked all armament selections and switches, and tuned in to the hum of the homing head of each K-13A missile in turn.. Satisfied that all was well, with a firm press of the starting button the Tumansky engine was brought to life in each MiG on the prearranged time. Thereafter they taxied out of the shelter of the pens on the dumbbell and lined up for take off.

The leader, Keith Lewis, lifted his gloved left hand to put the nose brake ON just prior to stopping in the centre of the left lane of the runway when he saw two dark, delta winged aircraft head on in a shallow dive straight down the runway and another two further behind, turning in. Janak was moving into echelon starboard position for a pair take off when he heard Keith's yell on the RT, "Janak, Mirages attacking, get off the runway". Keith opened throttle, turned left and made an unceremonious dash towards the shelter of the nearest blast pen, one of the ORP pens fortunately unoccupied at that time. He does not recall his actions thereafter but he was out of the cockpit and on the ground to see the second pair of Mirage IIIs disappearing from view.

Janak who had initially decided to take off as the first two Mirages zoomed overhead, having dropped their bombs about half way down the runway, changed his mind instantly on seeing the second pair over the far dumbbell heading for him. He did a complete 270 degrees turn as the second Mirage dived for the two MiGs on the ground and one of them opened up with his frontgun. The sound of a 30mm cannon is most impressive, but when two 30mm cannon are fired with intent to kill, the sound can be petrifying to the intended victim! That it only petrified and didn't kill or even do any damage was fortuitous. The line of fire fell exactly between the two MiGs, behind the tail of Keith's aircraft and just ahead of the nose cone of Janak's. The former was not to know that Janak was safe and his aircraft undamaged until he ran to the adjoining pen where he saw with much relief Janak sitting unhurt in the cockpit. In the silence that descends on an airfield after the blasts of bombs and explosions, of guns firing and of ack-ack blazing away at the enemy, the leader went back to his aircraft to discover that he had shut down the engine, switched off the battery master, tied his handkerchief around the brake lever and had jumped out of the cockpit without the ladder!

It was indeed most lucky that both the pilots and the aircraft survived to fight another day; however, what was rather amusing was to hear on the radio that evening that the PAF had claimed both the MiGs destroyed on the ground. It is ungracious to rub someone's nose in the dust, but it is hoped that that member of the Mirage formation who claimed two kills gets to read this some day.

The sortie, though DNCO , is logged in both pilots' log books and each of them also has two 30mm EFA shells with ball ammunition heads as souvenirs of that afternoon when they were literally in and out of the cockpit in double quick time! Also, it must be stated for the record that the runway was left totally undamaged by the bombing attack (contrary to the PAF claims), since both the pairs missed the runway and, for that matter, the taxitrack too!