An An-12 pilot recollects his experiences of flying out refugees and supplies during the 1971 Bangladesh War. 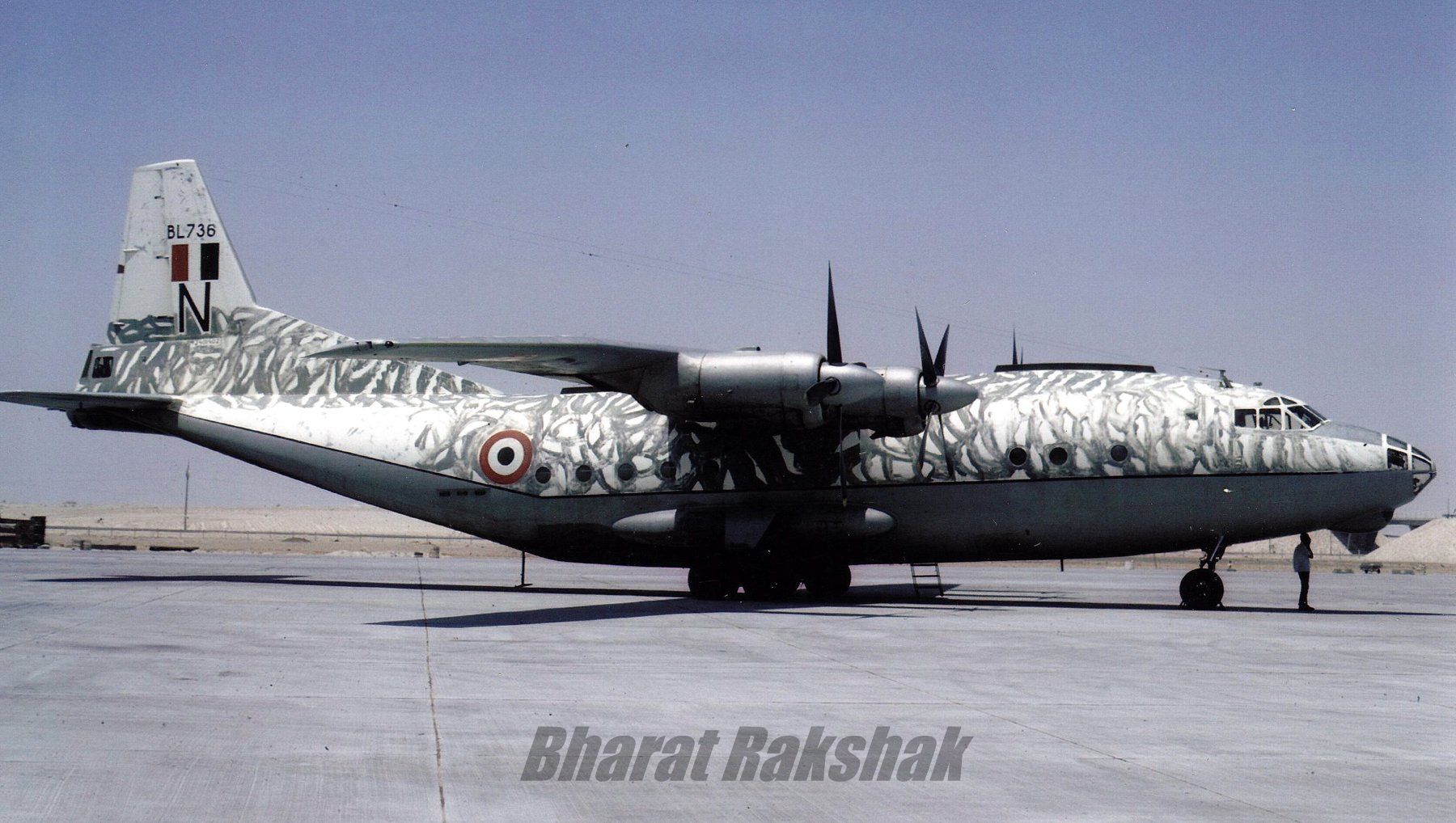 The existence of ARC is no longer all hush hush, and what was at one time referred to as Lalu's Circus, after Late Air Marshal L S Grewal, has done some very specialised work that went towards victory in Dec 1971.

After the crack down in East Pakistan in March 1971, there was a deluge of refugees across the borders into Bengal, Tripura, Mehgalaya, and Assam. Those of us who witnessed the deluge cannot forget the frightened look in their eyes. Those who spoke Bengali heard unimaginable tales of cruelty and massacres. I was to see some of it personally in Chittagong after the surrender, in January 72.

That apart, the airlifting of these refugees was some flying. The AN-12 has just 90 odd seats, and taking each pax to be 100kgs, the max load of 9000 kgs would be reached. Well before the Hercules C-130s reached India, AN-12s from ARC and the IAF, and C-46s were busy ferrying out East Pakistanis from Agartala. For those who have not been to Agartala, the barbed wire marking the border betwen India and E Pak runs just 15 feet from 02 Dumbell of the extra short runway. Ofcourse one cannot land on Runway 02 because the approach would have been over East Pakistan. An actual case of wrong Runway is of Late Virk. making a Left hand approach on RW 18, he saw RW 20, and rolled out on finals. On query, we heard a meek, "sorry landed on 20".

But each refugee carried just a small bundle of clothes like our dhobi does. They were lightly built, and not one of them weighed more than 50 kgs. So notwithstanding the not so short Runway 18/36, we would pack at least 145 persons and fly out to Guwahati or Kolkata. When families could not be split the figure rose to 155. It was a very efficiently and swiftly executed operation. What is more pertinent is that there was no Fanfare and media glare that accompanied the Hercules airlift, which they later chistened OP Bonny Jack. Named after an East Pakistani child adopted by the Americans and named Bonny Jack.

It was not easy doing all this. We all flew between 8 to 10 hrs a day, and night halt was prohibited at Agartala because of security, and at times shelling from across. Weather was dicey as it always is in late March and early April in that part of India. Nav aids were poor, and as far as I can remember our big brother radar in Meghalaya could never get a pick up if there was more than 3 Octa of clouding. On one occasion the rain was so terribly thick that I was sure that there was no air for the engines to breathe, only water, surely a flame out was imminent.

Unfortunately no records have been kept either in 44 Squadron or 25 Squadron nor in ARC about the airlift, We did much more in ARC by way of what we called the Joy Bangla Courier. The special tasks continued all the way till 03 Dec 71 when the first air strikes took place on IAF bases. Then Air HQs asked us to vacate the skies for their business. And what wonderful business they demonstrated.

Another major airlift was from Sarsawa to Kumbigram and Agartala. Eight C-46s, taking off before sunrise, dropping cargo and returning to Sarsawa in the evening for a repeat the next day. About 15 hrs of flying. This was in about Oct 71. Really a sky train.

Big Brother radar in Meghalaya never picked up a single aeroplane as far as I can remember. An amazing SU. Must be better today? Any way we did not vacate the skies. I also flew what was designated as the Interim Govt of Bangladesh to Delhi from Kolkata. Nazar Ul Islam, Tajuddin Ahmed, Col Osmani and one more person. My father was interested in the autograph of Col Osmani because he was credited with planning of OP GIBRALTAR, the 65 conflict. I think that except for the Col, all were assasinated with Mujib later in the coup at Dacca.

The evening that the first strikes took place, 03 Dec, we started "sweeping" E Pak for their radar orbat. it had been catalogued very well over the last six months. This is no secret. Its a part of the deal. I am sure both sides still do it regulary, and with greater sophistication. My log book shows that I did a sweep from about 1830 hrs for nearly two hours. then off we went to the West for some more of the same.

I flew on 6th and 7th for about 3 1/2 hrs each. I was delighted to hear Big Brother radar confirming the presence of fighters near me on the 7th. Later I came to know that we were alone on 6th Dec, some one had just forgotten we were up there.

By the 7th evening the air battle in the East had been wrapped up. So on the 8th, while heading for Guwahati from Sarsawa we were advised at Kishanganj to " maintain your heading, direct routing to Guwahati approved". In our AN-12 we were convinced that this was a ruse, and somebody wanted to clobbers us over E Pak. Like good boys we turned North for Bagdogra. A stern voice said, "Why are you turning, maintain easterly heading and proceed directly to Guwahati". A bit of non-standard R/T natter took place, and finally we decided to use our Authentication sheets to ascertain that our orders were from the right guys. Probably the first case of an aircraft asking Tower to authenticate itself.

So there we were, on a bright afternoon of 8th Dec 71, flying across E Pak at about 8000 mtrs. Were we being used as decoys? I know the Gnats were nearby. the feeling was exhilarating, and one felt very very proud of the air supremacy we had established. And then guess what, we flew back the same way to Kolkata the same day. I did it again on 9th Dec and also on 11th Dec on our way to Kumbigram from where we went to GGT. In GGT, were the Gnats, and by then Nixon had ordered the 7th Fleet into the Bay of Bengal. The supreme confidence of the Gnat pilots at GGT to take on the air power of the 7th Fleet was electrifying. Understandable given the air situation that these pilots had achieved by 11th Dec 71. Ofcourse ignorance is bliss, but so what, the josh was there. A few days later I went to Sarsawa for flying to Leh.

The end of the war was not in sight, what Tangail had achieved was unknown, though Bijoy Pandey will have much to tell you about a jeep that he dropped into a lake. The normal route to Leh is well known to both us and the PAF. So flying to Leh during a shooting war was not a ' milk run'. PAF Fighters in Northern Territories were quite capable of nipping across and taking pot shots at AN-12s flying at 8.7 Kms over Kar Tso. Many may not know, but there is what is called the "Escape Route" out of Leh. This is followed in case the ac does not climb due to engine failure or pressuristion failure, and it involves flying below mountain tops. Navigators and pilots of Chandigarh based sqns are very familiar about ' escape routes'. A mistake and you enter a dead end valley, and the ac is not climbing, oh boy are you in troube. The trick is to recognise the correct turnings and valleys, many look blind alleys, but are not. The credit for mapping this escape route must go to the pioneers of 44 Squadron in the 60s. It has never changed, indicating the precise job done by those aircrew. My salutations to all those from 44 Squadron involved in that enterprise,

I have flown that route many times as an instructor, and would you believe it, I flew it Reverse while going to Leh on 16th Dec. Entered at Rohtang and so on, and did it twice that day. I am not aware whether the IAF AN-12s did it also. We all had decided that no PAF fighter would find us in the valley and even if he did, there was no way he could put in an attack. I would surely welcome views on this from my fighter friends.

A few more trips across East Pakistan on 17th and then 20 Dec, finally ending with being the first AN-12 to land at Chittagong on 7th Jan 72. The war was over, but the arrival was no routine matter. Our Navigator was Legha, very senior to me, and when he advised descent we found ourselves over the Ganges delta, nothing except mud flats and water. We had to get up again, and tried desparately to contact Chittagong with no joy. All frequencies recieved from Dhaka remained silent. After coming over Chittagong, we saw the pock marks made by the Sea Hawks from Vikrant, and they looked repaired. but no R/T contact. Finally we did what all pilots are taught to do, we flew over the long pockmarked Runway and waggled our wings, lo and behold, we got a green very light signal and Lamp signal on finals. There we heard more about what really happened in the first few days after the infamous orders, " sort them out" were issued by Yahya Khan to Tikka Khan.

Everyone had advised me to bring back war booty. I first asked for and got a heavy brass key chain from hotel Agrabad. Back at the airport, I saw a PIA step ladder used for Daks and Fokkers. I loaded that into the AN-12, and returned triumphant with my war booty. I still have the key chain. The ladder was outside my room while in ARC. Children would come to the Mess and play with it, pushing it all over the mess premises. I took it with me to Sarsawa but had to leave it behind when I went to FIS in Jan 73. I dont think Wingco Dogra would have approved. I am still looking for it, cannot be used for any ac in this century. Besides its war booty.

I am waiting for Parvez Jamasji to tell us about his exploits with Chandan Singh across the Meghna river. There are so any of us still around who can give their personal experiences about 65 and 71. Why not Kargil and OP Meghdoot. That too is history, is it not?.