Back in the year 1989, a leading newspaper published a sensational story about a Hangar Collapse in Gwalior and how that resulted in half a dozen Mirage 2000 fighters being badly damaged or written off. The story created a furore and the Ministry of Defence was forced to issue a rejoinder discrediting the news report.  Gp Capt Noel A Moitra, VM 12931 F(P) was at Gwalior at that time.  For the first time in thirty years, he writes about the ‘incident’ in detail.

Maharajpur, where IAF Station, Gwalior has taken root, had a small 1.3 km runway, 01-19. The IAF took it over and built No 2 Base Repair Depot (BRD) around it, renaming the site AF Station Maharajpur, Gwalior.  Two hangars were built to house HT-2/Harvard aircraft. The HT-2 could not be used on that runway because of strong cross-winds. A new but short 1800 m runway was built, 06/24, and, in time, an Avro Sqn moved in (11 Sqn).

When the Mirage deal was being negotiated, there was an urgent need to extend 06/24 runway to 2.7km and build taxy-tracks and other infrastructure. No 2 BRD became 40 Wg AF in 1982, to house not only the 2 upcoming Mirage Sqns, but also 11 Sqn and other ancillary units.
.
One of the two hangars had been enlarged and strengthened to accept the number of Mirage 2000 ac it had been reworked for. When the first Mirage 2000 aircraft landed, the runway had been extended to 2600m, but without an overrun. The tarmac could accept only six aircraft.

By the end of the year, matters had improved greatly and full-fledged operations could be undertaken. 7 Sqn had also been raised.

On 01 Jan 1986, 1 Sqn was formed, with eight aircraft. The hangar was partly usable, as it had been designed for HT-2 & Harvard ac. Expansion work was slow, as the infrastructure of a digital age aircraft and its complex equipment and armament was also to come up rapidly.

The final part of reconstructing the 2nd hangar was replacing the old Asbestos roof with a new one, timed for May-June 1989. The Agency in charge of such work was under pressure to complete this task and move on. May is a very hot month in Gwalior, with temperature reaching 40°C by 0900.

For that 600 new tubelights had to be added, which was done speedily. That’s over 2 tonnes, when you add the weight of the twin lamp-holders and the piping.

On 24 May, two supervisors climbed on to the roof-The Last Straw! The Camel’s Back broke at 0945.

The tarmac facing front of 1 Sqn AF hangar collapsed with a thunderclap, as 7 Sqn aircraft (ac) were being towed into their hangar. The OAT was 44°C. Day flying had been called off and 14 aircraft of 1 Sqn had been pushed into the hangar for protection. The northern end had caved in and a steel girder fell on one ac, damaging it considerably. It’s twin girder flipped sideways into the Sqn garden, while a smaller beam settled gradually onto the spine of another ac parked directly below. The entire area was sealed off and a protective blanket of personnel from Nos 1 & 7 Squadron cordoned off the hangar.

12 aircraft were towed out of the hangar from the southern end.  Six were undamaged while another six had superficial damage, mainly ruptured skins. Local media was blocked but obtained info from the civilians working at the airbase. There was unsubstantiated gossip in the local media next day and a line or two in mainstream media, but unnecessary chatter had been cut down.

Dassault technicians and engineers reached the site 44 hours later. They required heavy and tall lifting devices. Winches and cranes were requisitioned from the Indian Railways workshop at Gwalior.

The last 2 aircraft were extricated using the cranes to lift the girder off the severely damaged ac and the beam off the second. The team assessed the damage to all 8 aircraft and pronounced them recoverable, 6 on site starting immediately and 2 put away till each and every part was examined and tested. They found, in the case of the severely damaged ac, that certain sections had to be imported from France.

The total cost of repair came to approx $2 million, a mere bagatelle. 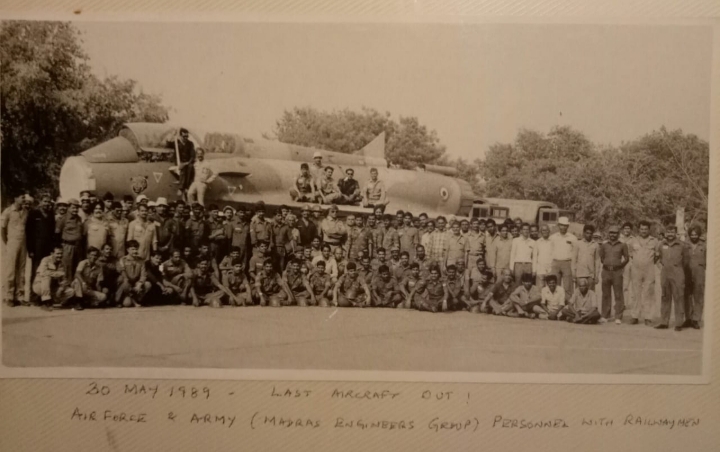 The last of the two badly damaged Mirages is extricated out by the Madras Engineering Group soldiers along with AF and Railway perssonel.  Photo Courtesy : AVM S Gopalakrishnan via Wg Cdr Raju Srinivasan

On Friday, 11 August that year, just 80 days after the accident, all 8 damaged aircraft carried out a flypast, led, of course by Apte.

I was tasked in March 1990 with carrying out a Board of Officers to propose a plan to build a new hangar, which took me all of two days. 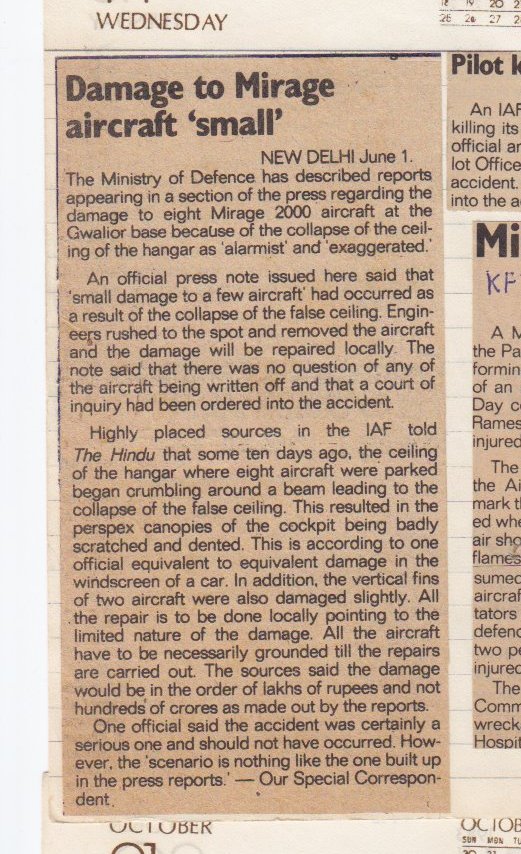 A clarification published in “The Hindu” news paper after the Ministyr of Defence tried to clarify the full story..