Landing a jet fighter on its belly is not a task for the faint hearted.   This is the story of one young pilot who walked away from one – and the story of an aircraft that refused to go to the scrapyard. 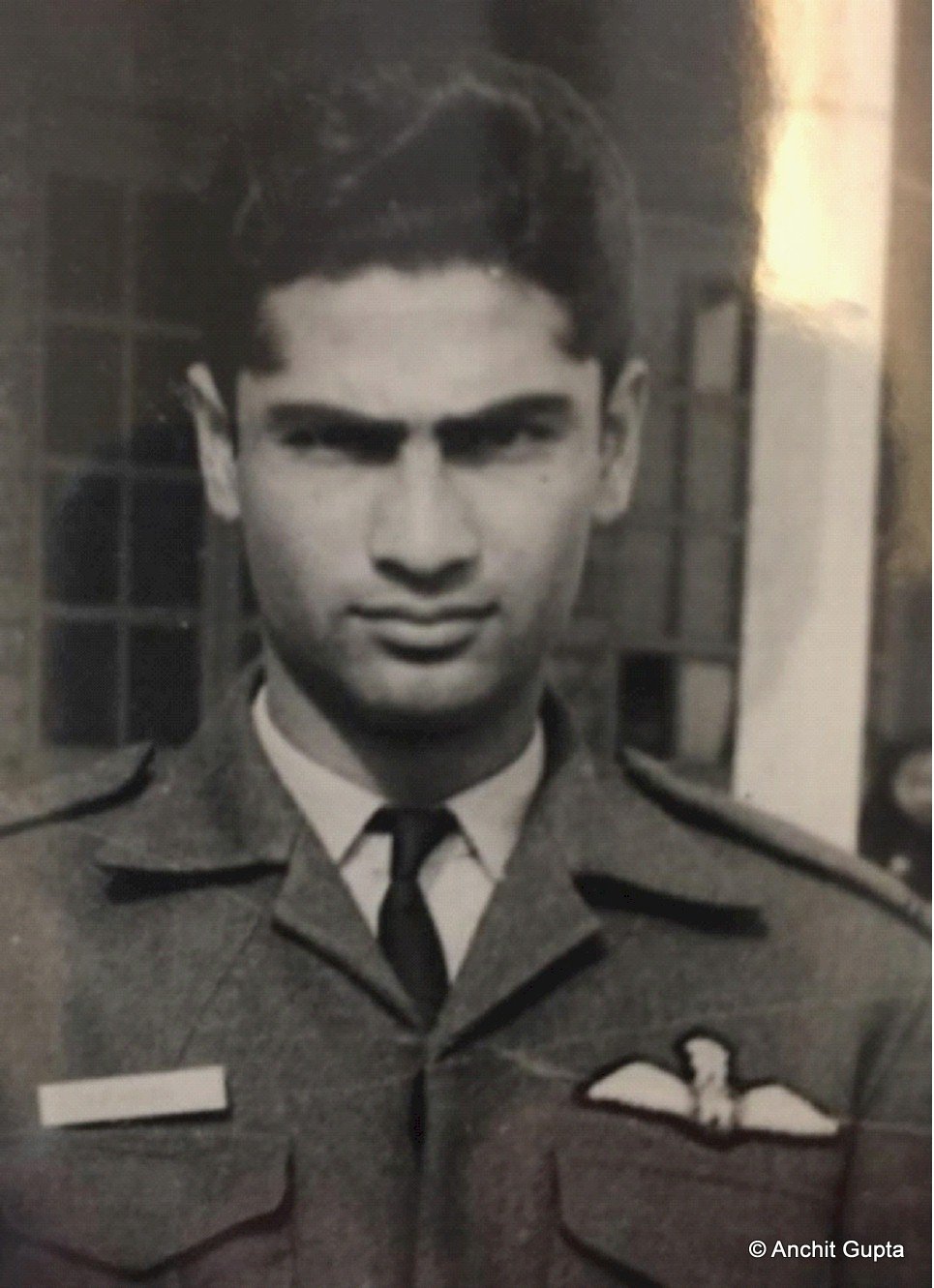 Landing a jet fighter on its belly is not a task for the faint hearted.   This is the story of one young pilot who walked away from one – and the story of an aircraft that refused to go to the scrapyard.

On 25th April 1972 then Flying Officer Ved Prakash Vadera (12004 F(P))(with 23 Squadron) was detailed to fly a single aircraft mission to the SK Range near Halwara for guns firing practice.   During the practice run, some of the rounds did not fire and the guns stopped. After following the necessary steps to make the guns fire without any success, he turned back on his return leg to Pathankot.

Approaching the airfield, Vadera wanted to use the speed brakes to slow the aircraft down. In the Gnat the main undercarriage doors acted as speedbrakes and these were activated by a lever on the left side of the seat. Vadera operated it and realised that the lever had come free . Not only would his speed brake work, but his undercarriage would not deploy either!

Immediately the pilot connected with ATC and was directed by the Flt Cdr, Sqn Ldr Bidyut Mukhuty to try various manoeuvres to get the lever to work. This included turning the aircraft upside down among other maneuvers.  None of these worked.  At this moment, the Flt Cdr, as per laid down SOP, gave permission to the pilot to eject, but left the final decision to him.  Vadera declined to eject and chose to instead try and land the aircraft in a ‘belly landing’.

A belly landing or a gear-up landing is when an aircraft lands without its landing gear fully extended and uses its underside, or belly, as its primary landing device. Normally the term gear-up landing refers to incidents where the pilot forgets to extend the landing gear, while the term belly landing refers to incidents where a mechanical malfunction prevents the pilot from extending the landing gear.  During a belly landing, there is normally extensive damage to the airplane. Belly landings carry the risk that the aircraft my flip over, disintegrate, or catch fire if it lands too fast or too hard. Extreme precision is needed to ensure that the plane lands as straight and level as possible while maintaining enough airspeed to retain control. Strong crosswinds, low visibility, damage to the airplane, or unresponsive instruments or controls greatly increase the danger while performing a belly landing.

For a belly landing the standard operating procedure (SOP) on ground is to lay the foam on the tarmac to reduce chances of fire.  It so happened that the fire tender was not equipped with foam at that time and hence this procedure could not be carried out. 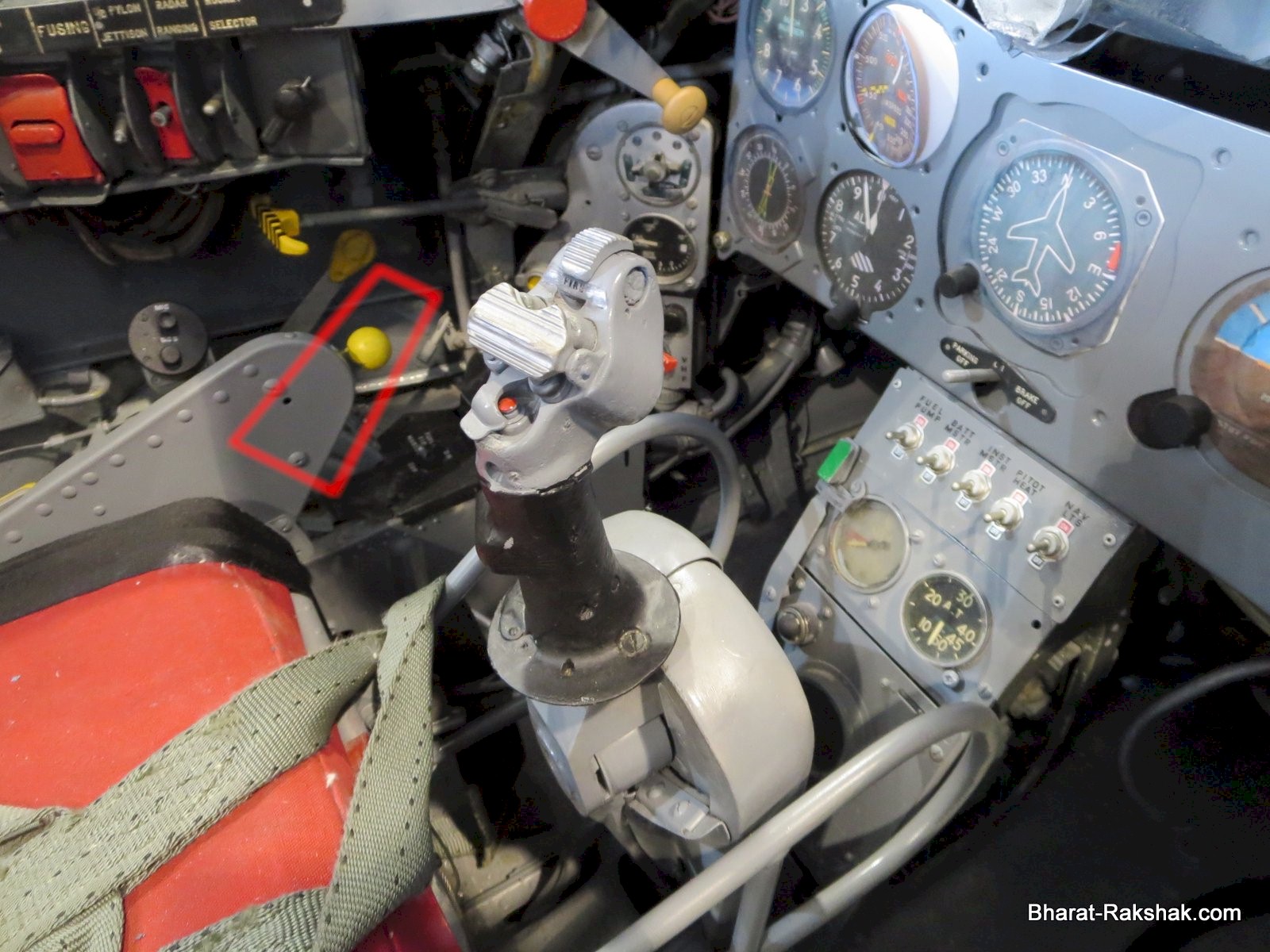 View of a Gnat cockpit. The highlighted lever is the undercarriage lever that opreates the doors. This cockpit is of a restored IAF Gnat E-276 on display at the Historic Aircraft Squadron Museum in Lancaster,  Ohio, US.

Yet other important pre-condition for a belly landing as per SOP was to burn off most of the fuel to minimize fire risks.

Having done this, Vadera lined up for R/W 01 at the correct speed (about 150 knots) and made sure was flying parallel to the ground to touch down at that angle once speed drops. He made a precise landing.  After sliding for 500 to 700 meters on the runway, the right drop tank sheared off, causing the aircraft to swing to the right and go off the shoulder and stop facing nearly 120 degrees to the right of the landing direction in a big cloud of dust.  The time was 1120 hours as the dust settled.

There was a red tinge on the glass perplex from the burning fuel but no internal damage to the cockpit. Vadera opened the canopy and ran far from the aircraft to a ditch. The aircraft still had live guns (that had not fired) and chance of firing from the impact could not be ruled out. 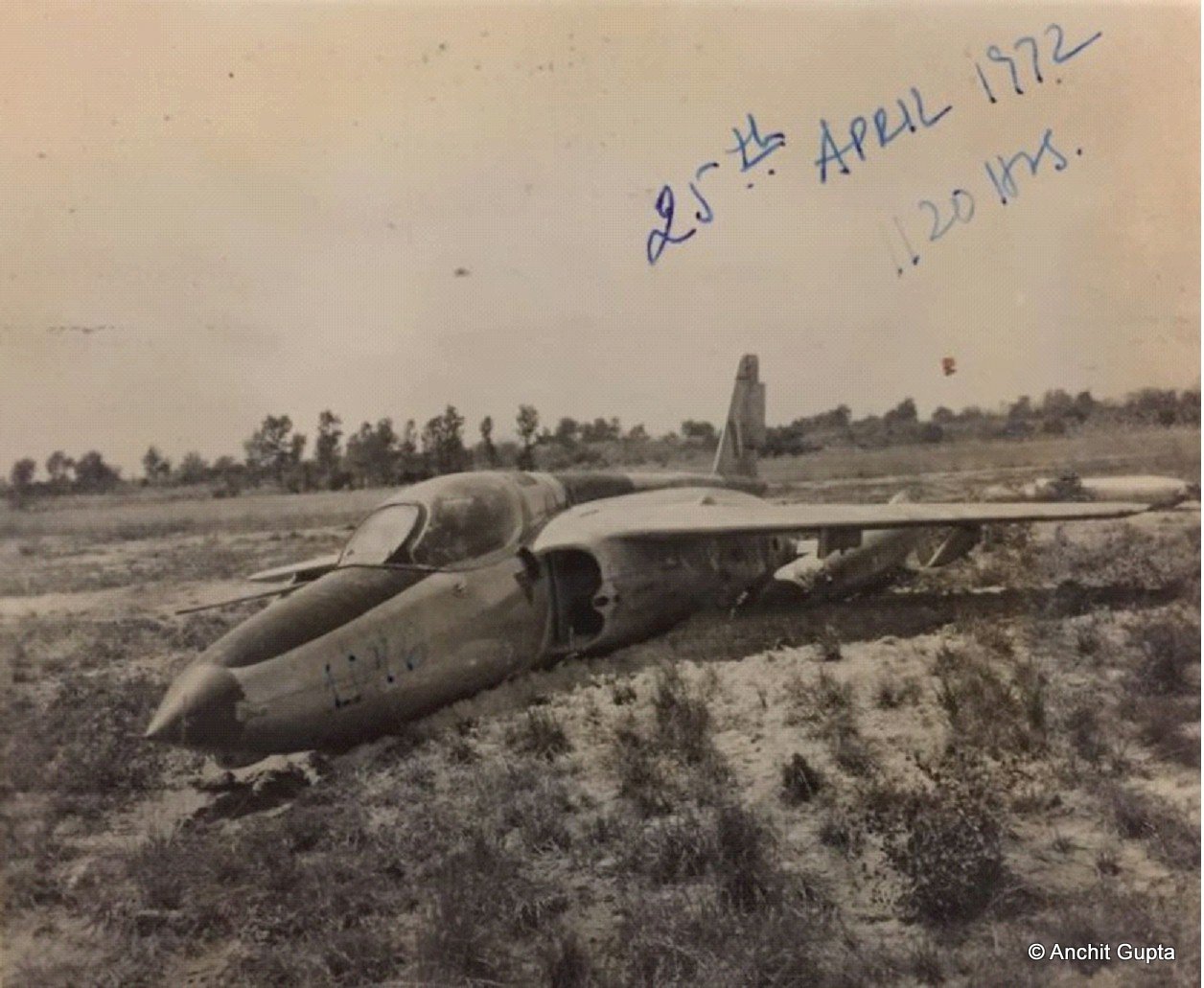 Gnat E1076 after coming to a rest. Both drop tanks have sheared off. The left tank is just aft of the left wing, while the right drop tank can be seen in the far background

The ambulance and crash tender came looking and were surprised to find the pilot safe and alive in the ditch. Except for a badly hurt neck (from the persistent banging in the cockpit), no major bodily harm was done.

The undercarriage lever is joined by a cable and the cable and lever are put in place by a big lug nut. The lug nut has a split pin put at the end of the joint to keep it together. The aircraft had just come out of maintenance. Once the panel was opened it was found that the split pin keeping the lug and the cable together was missing. The vibrations caused by the firing of the guns would have got the lugnut  and cable to move out of place without the split pin to hold it together and was the possible cause of the issue.

The official line on the investigation though is not known.

Belly landings of the Gnat were not as rare as one would imagine with at least three recorded occasions in the IAF. Incidentally, the first prototype of the Gnat built by Folland had a belly landing by a skilled test pilot, S/L Tennant of the RAF. In 1955, with the plane doing 600 miles per hour at 30,000 feet, the canopy ripped off and stuck him on the face and shoulder. While searching for home base, he ran out of fuel and just when he was about to make his final approach. Tenant pulled on the Gnat’s wheels and made a safe belly landing with only superficial fuselage damage. The airplane resumed its test flights a month later and the Gnat went onto play an active role in multiple countries across the globe.

Three other instances of belly landings of Gnats have been recorded in IAF. Luckily in all of them the pilot walked away unhurt.

1. Wg Cdr E J Dhatigara belly landed the very first IAF Gnat IE-1059 at Chilboten in UK in 1958 after suffering from engine failure. The aircraft never flew again and was shipped to India and can be seen at the IAF Museum.

2. VN James (10535) “Brother” belly landing after an ops sortie at Dumdum in 1971. He landed on a foamed runway. Touchdown was a bit nose high, resulting in Radome section breaking. The irony was that as the aircraft was lifted by crane from main plane lifting points, the undercarriage came down on its own. After installing the ground locks, it was towed back.

3. In Bareilly, Shyam Hattangadi (8035) “Sluggo” belly landed on the main runway with undercarriage up sometime in 1967/68. Foam was laid on the runway for him at a point a bit further up the runway where he was expected to slow down and stop to avoid a fire. As per the related anecdote, he walked out smiling.

4. Lt Cdr Raminder Singh(Soda) Sodhi of the Indian Navy on deputation to the Air Force from 24 sqn also had a Gnat belly landing at Tezpur.

The airframe involved in this accident with Fg Offr V P Vadera  would normally have been relegated to the scrap yard, but it was not to be this time.  It seems to have been repaired and put back on ops duty as seen from the log book entry in 1975. 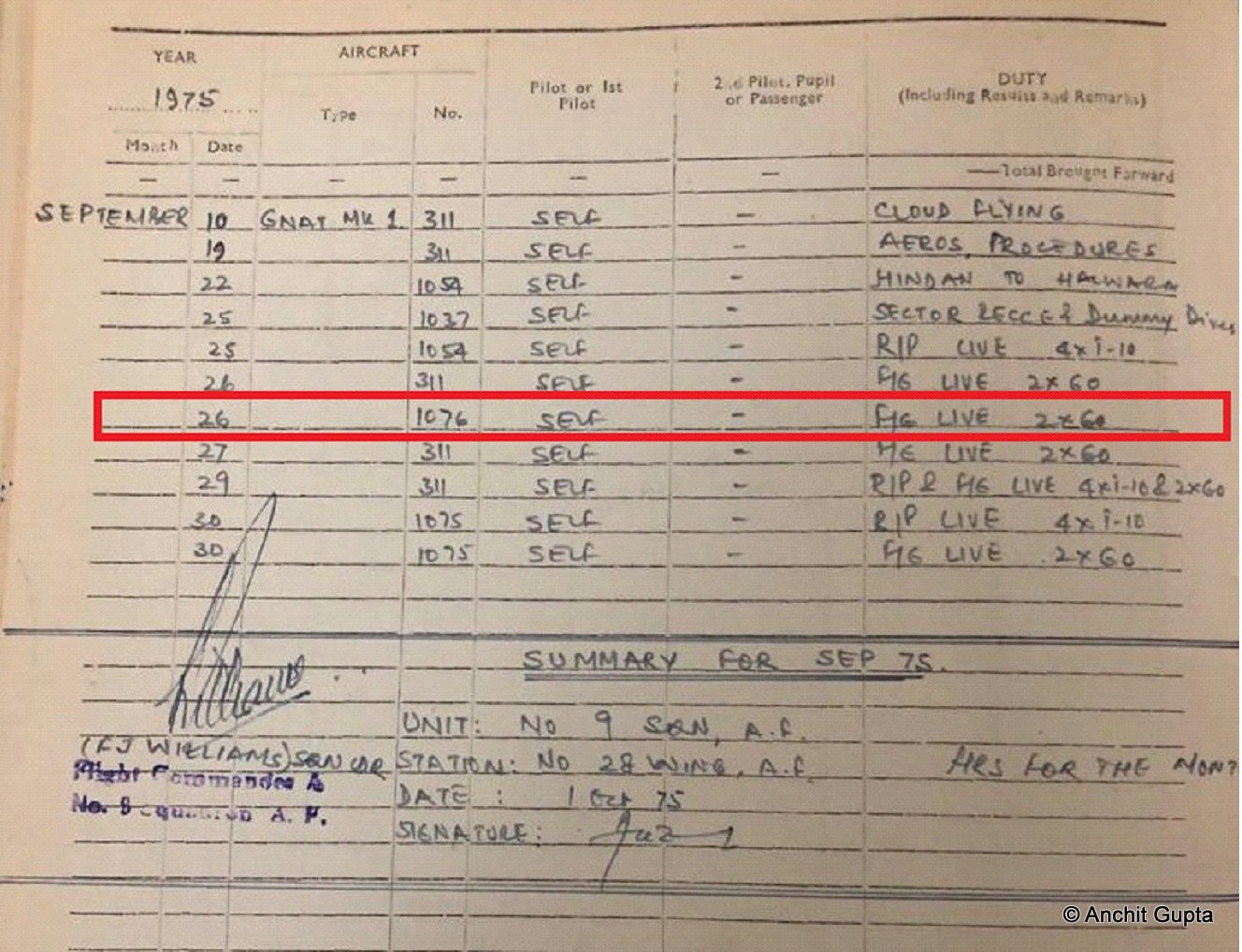 Logbook entry from September 1975 shows that E1076 was flying on operations!

While the future of the airframe in the IAF beyond 1975 is unknown, the airframe finds itself today still in existence at the March Field Museum in the USA.

The March Field Museum in Riverside, CA in the USA holds one of the five Folland/HAL built Gnat aircraft that were sold by the IAF to Dave Talichet in the 80s.  Initially displayed in IAF plain aluminium finish, HAL Gnat E-1076 was repainted in the Red Arrows paint scheme, while carrying the IAF Serial number on its fuselage. It languished at the museum for years in that inaccurate  scheme. In 2017, the Museum and its volunteers decided that the appropriate way to display this Gnat was in the colours that it served. A group of restorers stripped the red paint off it, and repainted it an more representative IAF Scheme.

Gp Capt V P Vadera left the IAF in 1992 to pursue civil aviation and is currently settled in New Delhi. This article is based on an interview conducted in September 2018 by Anchit Gupta.