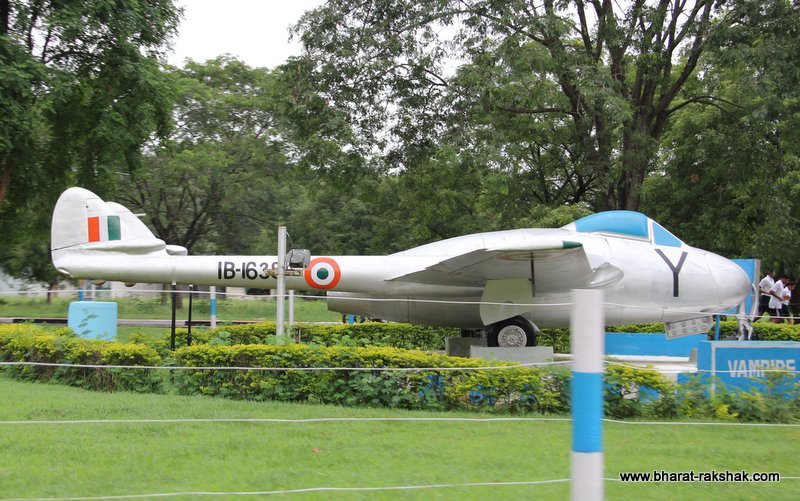 My log book for the month of April 1975 has an innocuous entry as follows:-

However, this was no ordinary sortie. A short tale hangs on this short 40 km trip, made on a warm but clear day, from neighbouring Hakimpet to AFA. The story starts with a request made to Air HQ by Air Cmde (later on Air Chief Marshal) "Baba" Katre, then Commandant AFA, to provide a Vampire aircraft for display at the Academy. Having been actively involved in the design of the Academy he knew that the two major triangular traffic islands were specifically designed for display of vintage aircraft. However, though the Academy had been in existence for about 4 years no historical aircraft had yet been positioned.

Vampires by then were already obsolete as they were no longer in squadron service and 112 PC (the last course to fly the Vampire) had finished their training; 113 PC was doing their advanced training on the newly inducted Kirans at AFA. In fact, many Vampires had been flown to their last hour and then parked on the western part of the tarmac, as they came to the end of their TTL (Total Technical Life). By April 1975 about 15-18 aircraft (actually aircraft shells, as they had been stripped of all usable items) adorned the edge of the dispersal, externally still looking quite complete (1) and ready to fly.

In addition, there were still about half a dozen fighters (Mk-52) and an odd trainer or two (Mk-55) still serviceable and in storage locally, although none of them had been flown since Dec 74. Therefore, the request of the Commandant, AFA should have received an immediate positive response. But in those days there was hardly any sense of history, nor the urge to preserve our heritage; in fact even aircraft photographs were rare, there were hardly any aircraft on display anywhere and even the IAF Museum had not yet even been thought of. Thus, it is not surprising that somebody at Air HQ wrote back saying that display of aircraft was a waste of time and money and no Vampire could be spared for the purpose.

Air Cmde Katre, however, was not one to give up easily. He called up CI, FTW (Fighter Training Wing, as AF Station, Hakimpet was then called). Wg. Cdr. Roy Kothawala (2) was also the officiating Station Cdr that day (I think Air Cmde Katre timed it shrewdly; he did not want to deal with another big NO and waited till the then Stn Cdr was out of town!). Roy Kothawalla immediately ordered the CEO to prepare a Vampire Mk 52 for flying and then sent for me.

Why me, you might ask. Well, since there was no flying at Hakimpet all the QFIs had been attached out to various FTEs. In fact 4 QFIs were in Poland doing their conversion on Iskra aircraft. I too had been away on attachment to FIS for over three months, but I had been routed back to FTW at my request as my wife was expected to deliver our second child any day. I was the only Vampire qualified pilot available to carry out the task the CI had in mind. Roy Kothawala's briefing was simple. A Vampire Mk 52 was being de-inhibited and prepared for an air test. Its 'Form700' was to be taken on board. He then looked around surreptitiously; satisfied that no one was listening, he whispered what he wanted me to do next.

Very soon I got airborne. I hadn’t flown the Vampire for about 4 months and it felt much lighter and more responsive than the Kirans which I had been flying at FIS. I arrived overhead AFA and sought permission to carry out aerobatics, which was promptly given. I learnt later on that the Commandant was at the ATC to see his first 'vintage' aircraft arriving. After about 20 minutes of some pretty tight manoeuvring, I declared an 'emergency' of hydraulic pressure falling and severe engine vibrations. The call was duly acknowledged by AFA and I was given permission to carry out a priority landing; naturally at AFA.

I landed, taxied in and parked in front of Hangar No.6. Then with a flourish I took out the Form 700 and proceeded to write the 'snags': engine vibrations, hydraulic failure, oil pressure fluctuating, undercarriage not lowering on main system, ..... the list of problems covered one whole page of the F-700. If photocopying machines had existed then I would definitely have kept a copy of that page; it was the biggest bunch of lies I had ever penned! Before being dropped back in a Harvard (which were still flying at AFA) I shared a glass of beer with a very grateful Air Cmde Baba Katre.

The end of the story was most gratifying for those involved. Air HQ, "after due consideration", concluded that the engine change, rectification and final recovery of Vampire Mk 52 IB-1638, which had only a few hours before TTL, was "economically unviable". The Air HQ letter went on further to say, "....therefore, the aircraft would have to be 'disposed off' at AFA." However, Baba Katre hadn't waited for this pronouncement. Within days of its arrival at AFA a team of airmen from Hakimpet towed and installed the Vampire at its present location, just opposite Academy House, on the Vampire Triangle, where it remains till date  (See Additional Notes below).

Every time I pass this little beauty I remember the satisfaction I had in writing DNCO, later that day, in the FTW Con Training Authorisation Book, although it was a DCO from the point of view of the intended mission. Having read this piece I am sure you'll excuse me if once in a while I get a bit emotional about that pile of metal and plywood with twin-booms that lies within a hundred meters of my present residence. 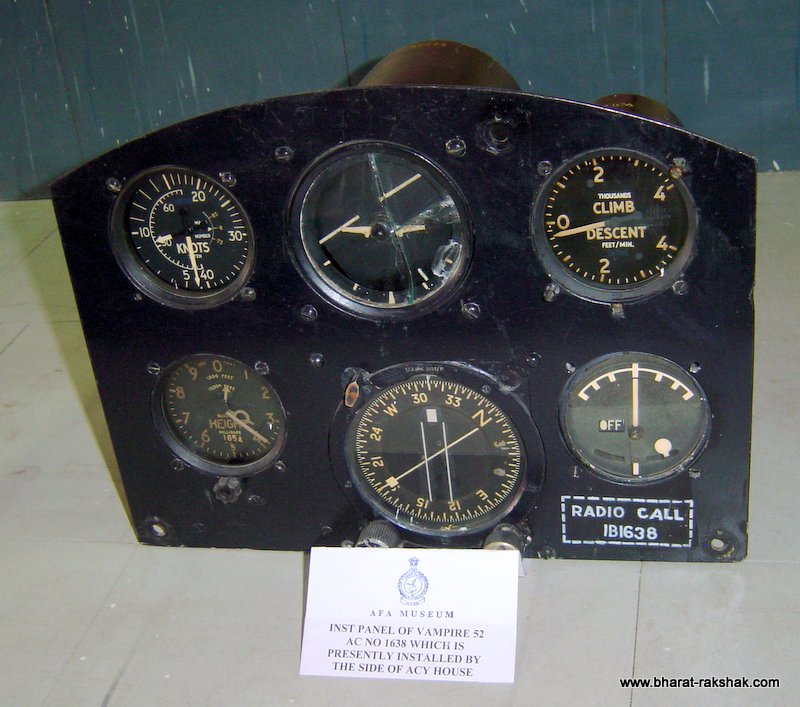 Vampire IB-1638 carried its complete instrument panel intact for almost a quarter of a century. When the aircraft was repaired in 2001, the Instrument panel was moved for display to the AFA Museum.

Commissioned in October1965, AM Bhojwani is the present Air Officer Commanding in Chief of the IAF's Training Command. This article appeared in Ankur, the in-house magazine of the Air Force Academy at Dundigal. It was written during the tenure of Air Marshal Bhojwani as the Commandant of AFA.

. These Vampires were auctioned off as scrap in the late 1970s. They were broken up into pieces by the Scrap Vendor before being carted away.

. Wg Cdr Kothawala was the pilot of the Bell G-47 that chased Flt Cdt R B Menon in his adventure recounted in "....And One Flew Under The...."

The Vampire's First Flight! : IB-1638 first flew on 3rd January 1958. The Initial test flight was done by the HAL's Chief Test Pilot, then Flt Lt Kapil Bhargava and lasted 20 minutes.  It was finally cleared with all production tests after completing a total of six flights  lasting  2 hours 15 minutes, all done by Flt Lt Kapil Bhargava. The aircraft was handed over for ferry on 28th January 1958.

According to Gp Capt Kapil Bhargava, The aircraft must have had trouble with both stalling and aileron overbalance for the first four flights. Only in the fifth flight , did the aircraft clear the full production test schedule. The last flight cleared drop tank carriage but not fuel feed from them. That was left for the ferry pilot to do.

Vampire IB-1638 can be still seen at Vampire Triangle at the AFA. However, over the years the airframe has deteriorated due to prolonged exposure to the elements. Air Marshal Bhojwani had completed a restoration project for the Vampire, that saw it being bought back to shape. This Vampire was one of the few aircraft that had its engine inside. The engine has since been removed and is believed to be with the Academy.

Copyright © BHARAT RAKSHAK. All rights reserved. Reproduction in whole or in part in any form or medium without express written permission of BHARAT RAKSHAK is prohibited.