An Overview of the Goa Operations – Adapted from Dr. P.N. Khera’s Official History of the Indian Armed Forces . The information in this article may be out of date.

Goa was originally a Portuguese colony after the British left India. The Portuguese refused to give up their colonies in-spite of repeated requests of India. The struggle was two fold. From within Goa and from the Indian Government outside Goa.

Even though the Portuguese assumed that India had renounced the use of force, both the Prime Minister Jawaharlal Nehru as well as the defense minister, Krishna Menon made it clear that India would not fail to resort to force as an option, if all diplomatic efforts to make the Portuguese give up Goa fail.

After years of Negotiation, in late 1961, The government decided to deploy the armed forces in an effort to evict the Portuguese out of Goa and other Enclaves. Accordingly in November 1961, India made preparations for the same. Lt. Gen. Chaudhari of the Southern Army deputed 17 Infantry Division under Major General K.P. Candeth along with the 50th Para Brigade. To carry out the occupation of Daman, one infantry battalion – 1st Maratha LI – was assigned. Two battalions, 20th Rajput and 4th Madras, were assigned the task of taking over Diu.

The Portuguese were suspected to have some supersonic interceptors initially. Later it was believed that though fighters were not based, they maintained a regular supply chain by air. Facing this modest and insignificant air threat was amassed a huge Indian Air Force detachment. India had by that time six Hunter squadrons and four Canberra squadrons as its latest additions to the Air Force.

The Indian Air Force was requested to provide support elements to this massive ground force. The AOC-in-C of the Western Air Command, Air Vice Marshal Erlic Pinto, was appointed theater commander of all air forces in the Goan Operations. 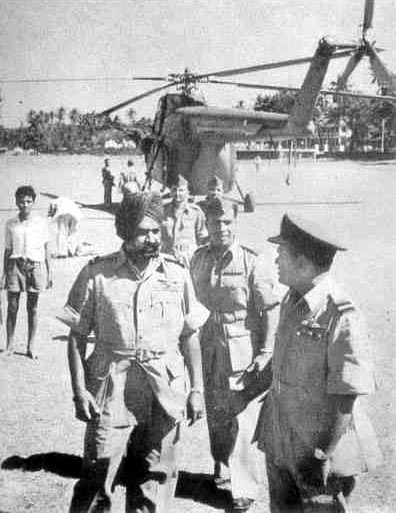 Air Vice Marshal Erlic Pinto, discusses with the TAC Commander, Air Commodore Shivdev Singh, at a forward area. Seen in the background is a Mi-4 Helicopter. Seen in the middle is Wg Cdr S Raghavendran, from Ops Command.

Pinto had his HQs in Poona, Looking after all the operations in Daman, Diu and Goa. One Tactical Air Center, the No.2 TAC, was allocated to the Goa Sector. This TAC under Air Commodore Shivdev Singh conducted operations in conjunction with HQ 17 Division. Operations in Daman were to be the responsibility of No.2 Wing and Diu was directly under the Armament Training Wing at Jamnagar.

The main staging airbases were Poona and Sambre. Poona hosted two Canberra Squadrons No.16 and No.35 along with a Hunter force from No.17 and No.37 Squadrons.

It was at Sambre that most of the air component concentrated in. Sambre was initially raised to fulfill the requirement of a Forward Base from which support could be extended to Goa. No.45 Squadron had their main detachment of 8 aircraft based there. No.17 had one detachment of Hunters for air defence. And Harvards, Otters and Mi-4 helicopters formed the communication and command duties.

The build up to the operations started on 2 December 1961. Probing flights by some fighters and bombers were carried out on December 8th and 9th to lure and draw out any Portuguese air opposition that may have been there. A Vampire, from No.108 Squadron, flew a PR Mission over some strategic targets without encountering opposition. These baiting missions were flown right up to D-Day, trying to draw out the Portuguese Air Force, but to no avail.

Then on D-Day 18 December, the Army Chief had sent a directive for the air force to take out specific targets. Namely:

1. Dabolim airfield to be made unusable but at the same time ensure the terminals & facilities are not damaged.

2. The Wireless Station at Bambolim to be knocked out.

3. Close support to the land forces.

4. Denial of use of Diu and Daman airfields. However, these airfields are not to be attacked without Prior approval.

The first use of air power occurred on December 18th. No.35 Squadron sent in a massive wave of 12 Canberras led by the CO, Wg. Cdr. N.B. Menon to attack Dabolim. The Canberras dropped 63,000 lbs. of bombs within minutes, on the runway. The Canberra pilots took care not to bomb the Terminals and the ATC. Menon noticed the presence of two large transport aircraft in the dispersal area. One Super Constellation and one DC-6 aircraft were parked on the apron. However the Canberras left the aircraft alone.

A second raid by eight Canberras of No.16 Squadron led by Wg. Cdr. Surinder Singh dropped more bombs on the runway area. The Portuguese aircraft were again left untouched. By this time, it was assumed that the airfield was rendered unserviceable and these aircraft can be captured intact as they had no where to go. However the Portuguese pilots of these aircraft proved to be both foolhardy but brave. During nightfall, they managed to take off the aircraft from the still damaged airfield and made their getaway to Portugal.

Meanwhile six Hunters of No.17 Sqn led by the CO, Sqn. Ldr. Jayawant Singh took off from Sambre and attacked the Wireless station at Bambolim. Attacking with a mixture of rockets and gun cannon ammunition, the station was soon left a smoldering wreck.

The Army requested close support now and then. And usually Vampires of No.45 flew Cabrank over the sector to respond to any call for the support. However Two Vampires of No.45 made a mistake when called by troops of the 50th Para Brigade. They fired rockets into the positions of the 2 Sikh LI Bn injuring two.

The Sikhs on the other hand got their own back and fired at an Unmarked Harvard flying from Sambre putting a couple of holes into the aircraft. These were the only two untoward incidents in the sector.

Shortly before the surrender on the 19th, the Liberators of No.6 Sqn flew over Marmagao in a leaflet-dropping mission. Heralding the surrender of the Portuguese in this Sector.

Daman sector saw about 14 Sorties by Mysteres of No.1 Squadron flying from Santa Cruz. Flying in pairs of two, the Mysteres harassed Portuguese gun positions continuously throughout the day. The major air effort of the Goa Operations were directed at the smaller enclave of Diu. At the southern tip of the Kataiwar coast.

The Nearest Airfield to Diu was the airbase at Jamnagar where the Armament training wing was located. ATW Jamnagar had clear instructions not to mount offensive action against the Diu airfield without clearance from the Advanced HQ of 20th Rajput, the battalion on the ground. However on the morning of 18th, contact could not be established with the ground forces and the CO, ATW decided to launch a strike against the airfield at around 1100 hours.

Four Toofanis armed with 1000 lbs. bombs took off from Jamnagar arriving over the Diu airfield in minutes. The leader of the Toofanis, noticed some white flags being waved from the area surrounding the airfield which he assumed as a sign of surrender. Added to the confusion was a garbled message received by the Toofani flight about, “the airfield is in our hands”. Assuming the surrender had already taken place, the flight leader took the Toofanis over to the sea and jettisoned their bombs into the sea! It was only after returning to the base that they found out that no surrender took place. The white flags noticed near the airfield were actually Dhobies washings hung out in the open to dry!

Two Toofanis took off again at 1400 hours and bombed the intersection of the runways at Diu. Another four Toofanis followed up later on rocketing the control tower, wireless station and the meteorological station. 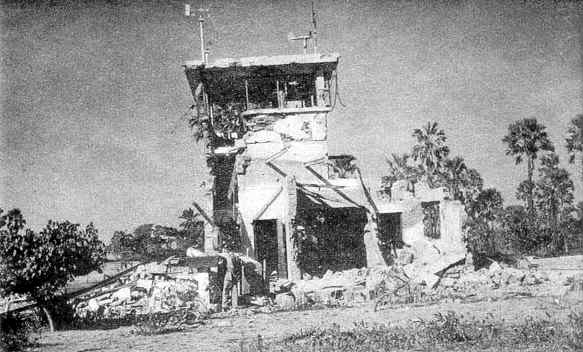 Meanwhile Poona had planned for a massive strike by two waves of 8 Canberras each to bomb the Diu airfield. But the proximity of ground troops near the airfield prevented the deployment and the raid was called off.

Around the same time, four Vampires flying from Jamnagar over the sea near Diu, noticed a Fast Patrol Boat traveling out of the Diu harbour. Upon closer observation, the Vampires were fired at by the Boat. Fg. Off. P.M. Ramachandran – the lead pilot – immediately engaged with gunfire and rockets and sank the patrol boat. For this feat he received the Shaurya Chakra.

Diu received the maximum air effort of all the three theatres during the Goa operations. With nearly 67 sorties being flown by aircraft from Jamnagar and elsewhere. All expenditure of ammunition ceased by the end of the second day, the surrender had all but taken place formally.

Portuguese Governer, Manuel Anonia Vassalo De Silva, signed the surrender document on December 19th and 3306 Portugese troops of European origin laid down their arms. They were repatriated to Portugal after a few months.

The Goa operations gave the IAF an opportunity to employ jet air power for the first time on a massive scale. However that the Portuguese did not have any AA defences nor aircraft to defend their positions. This robbed the IAF of a realistic battlefield scenario. It was not until 1965 that the combat potential of the air force was actually put to test.

Air Vice Marshal Erlic Pinto , the AOC-in-C Western Air Command was killed in an helicopter crash on 22nd November 1963, when the Alloutte III helicopter he was travelling in hit a wire over the Poonch river.

Diplomatic relations between Portugal and India were cut off for decades, and only recently did things cooled between the two nations, with Portugal agreeing to return the gold and assets held by their national bank. Hopefully this small conflict with the European nation was the last against a western nation.

Khera, PN. Armed Forces of the Indian Union – Operation Vijay: The Liberation of Goa and Other Portuguese Colonies in India (1961) in Goa, Daman and Diu