Wg Cdr A K “Lui” Gupta, 13072 F(P) joined the caterpillar club on his very second solo flight in a Vampire Jet fighter. This is the story of possibly the last bailout from a Vampire.

“If you can walk away from a landing, it’s a good landing. If you use the airplane the next day, it’s an outstanding landing” – General Chuck Yeager, USAF

It was a day prior to Valentine’s day, 13th Feb 1971, I was barely 21 years old. Four years of rigorous training to get the coveted wings was to end soon and I was high on becoming a hot shot fighter pilot. It was to be my second solo flight in the Vampire Mk 52 fighter bomber at the Fighter Training Wing (FTW) Hakimpet, Secunderabad. I was all too keen to show off my flying skills to my colleagues and impress the instructors.

The mid-morning was clear and bright with the odd cloud. After a normal take off, whilst retracting the undercarriage, at a low height, I found the retraction lever getting stuck and not allowing the undercarriage to retract. I was eager to get the undercarriage up quickly to demonstrate a perfect take-off. To resolve the problem, I committed the cardinal sin (something all pilots are repeatedly asked not to do) of looking inside the cockpit to diagnose the problem.

A bang! followed by sparks

For those of you familiar with the Hakimpet airstrip, it has a small hump towards the end, almost like a shallow causeway. Unless careful, it can easily lead to an over estimation of altitude after take-off. Though aware of this, as I looked inside, the right hand holding the control column moved slightly forward resulting in the aircraft descending instead of climbing. The next was a “bang”. My aircraft had hit ground. The normal and instinctive reaction was to pull the stick back and climb.

The ATC and duty instructor had seen this happen. They had noticed the aircraft take off, hit the runway, seen sparks and smoke and made an assumption that the aircraft engine had caught fire and I was attempting to land straight ahead. The DATCO (Duty Air Traffic Controller) pressed the buzzer declaring an emergency for the crash tenders and crew to be ready. As the aircraft was climbing, I was advised to go for a landing on the cross runway. Just as I lined up for landing, the sparks subsided and I was asked to abandon the landing. The ATC noticed the abnormality in the aircraft undercarriage and asked me to do a flypast in front of the ATC for a visual check. I was asked to check engine parameters and advised to climb overhead and orbit at 10,000 ft. 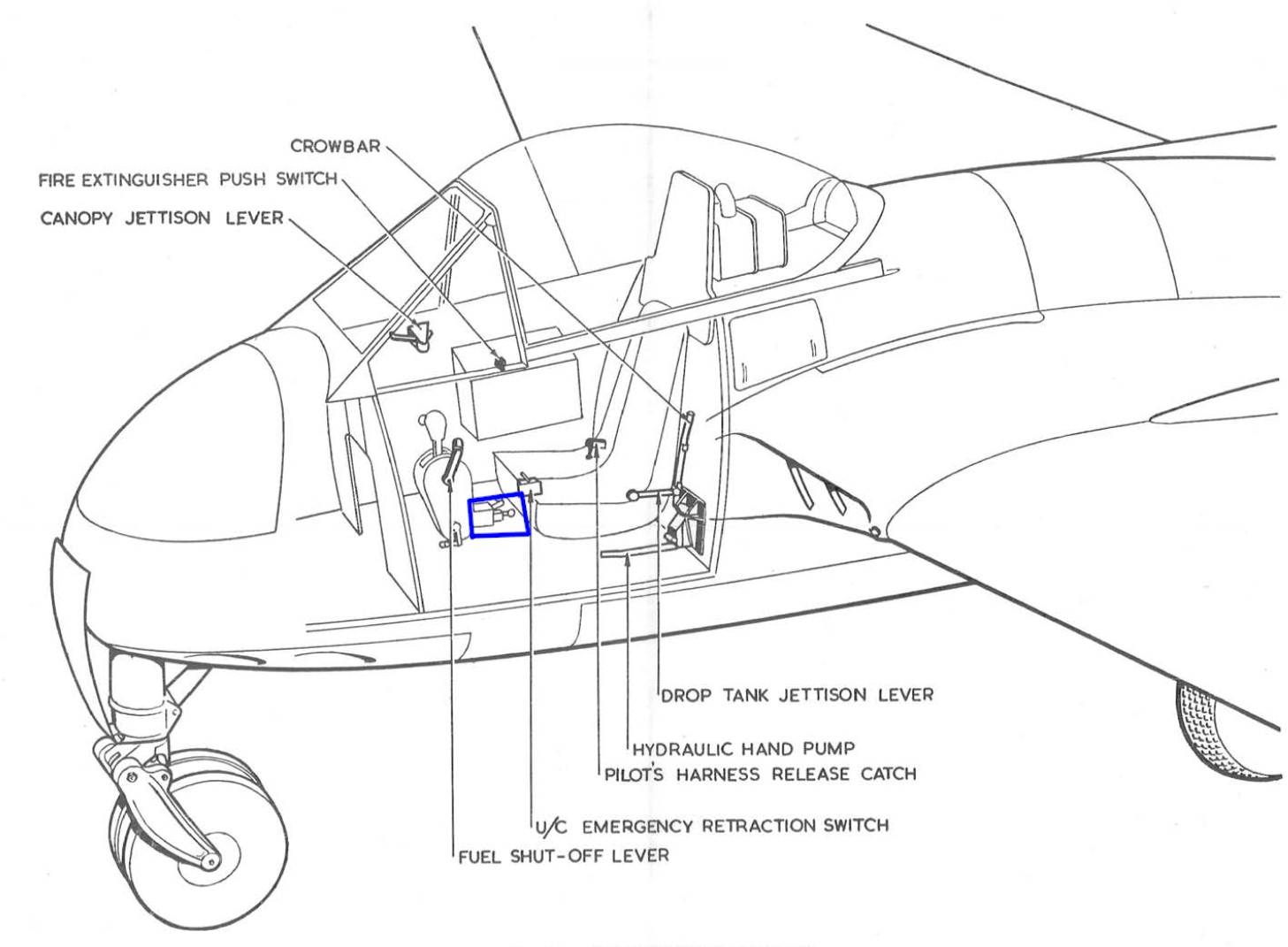 Wg Cdr Marshall, the COO was airborne with another cadet for a check sortie. He carried out a visual inspection of the aircraft at height and transmitted back the details of the undercarriage status. This is when I came to know that the nose wheel was left behind and only a stub protruded while the left undercarriage was bent inwards at an angle. The right wheel was intact. I now knew the true predicament facing me.

We were taught various scenarios of landing with undercarriage issues, but this was new. On advice from the ground, I carried out various manoeuvres to try and get undercarriage to fully retract in or get all the three wheels down. Turned and banked hard to exert maximum G’s and then take negative G’s. Nothing worked.

The Vampire was fast, but thirsty. Fuel consumption at low to medium altitude was ferocious. Tank capacity of 1,500 Litres used at the rate of 1,200 litres per hour at low to medium altitude, meant 60 minutes flying time maximum, including take off and climb and descent and landing. By now the Station Commander, CI (Chief Instructor) and CFI (Chief Flying Instructor) had joined the duty instructor in the ATC. Time was running out.

Finally, it was decided that I should Bailout. A few trickier solutions to land the aircraft could have been attempted, but given my limited flying experience, they were given a pass. The Vampire was made of Balsa wood and on landing without undercarriage, fire was a real risk for a rookie pilot.

Bailout was no easy task either. The only instruction given in the pilot’s notes was the same as that given to Spitfire pilots – jettison the canopy, wind the trim hard forward, release the seat straps, roll upside down and fallout, hoping to miss the tail plane. If you made it, count 1-2-3 before pulling the rip-cord for the parachute.

ATC guided me on the manual bailout procedures a few times and I ran the drill. Reduced throttle and lowered airspeed to just over stall speed, removed the canopy and inverted the aircraft. Finally, it was time to unharness the seatbelt and drop down. I did that. At this point, my recollection of further events is blank.

As per eye witnesses, I was picked up by the ground search party around 10 Km north of the airstrip. SqnLdr (Late) SS Dange was the first one to reach the spot. I was unconscious and my helmet was damaged on the left side. He covered me in the chute and went about finding the rest of the search party. I spent about four weeks in hospital and was diagnosed with a head injury. It could have been caused by hitting a part of the aircraft or the rocky terrain on which I landed subsequently. About 8 months later, on the day the 1971 war broke, I was declared fit and finally got the go ahead to get back to flying. The trainer version of the Vampire had already moved to having ejection seats. To my knowledge, this probably was the last manual bailout in IAF history.

I was wondering when this incident would surface, if at all, purely for the novelty, as generally a bail out is the result of an ’emergent situation’ but here it was somewhat of a ‘Live drill’ of an EMERGENCY Bail Out.

Rejoining circuit I was curious as to what the ‘hiullaboo’ on R/T was all about as generally ‘lowering’ the L/G is the problem & not retracting. ATC advised that he had ‘3 reds’ & could not lower or retract.

Great!!! I was running low on fuel myself but realised that this sort of thing could end up in a mess if I did not verify what was the problem. Quickly spotting his aircraft I pulled in line astern & verified that he had no undercarriage with a stump for a nose wheel. The rest is of course as narrated except that I squashed any question of belly landing. I set the direction of bail out somewhat parallel to the main road leading into the Local Flying area.I followed him down to see his parachute deployed & was informed that the ALR Jeep was already on its way. With low fuel there was no time to loiter around.

Got the message that the pilot had been picked up.

A review of the accident revealed that the difference between the operating procedure for raising/lowering the U/C between the Trainer & Solo 52 was the most likely cause. The Trainer had two ‘prongs’ to be pulled while the Solo 52 had to be ‘pressed’ in & lifted/lowered. In the absence of a Simulator pupils were merely briefed but never had the practical experience of the difference. I had an SOC Solo 52 aircraft set permanently up on posts with a working hydraulic system & air compressor for Ground Experience on LG & Flaps operation. A drill before solo.  Most probably this was the last bail out from a Vampire 52. The Vampires did not survive much thereafter in Service. 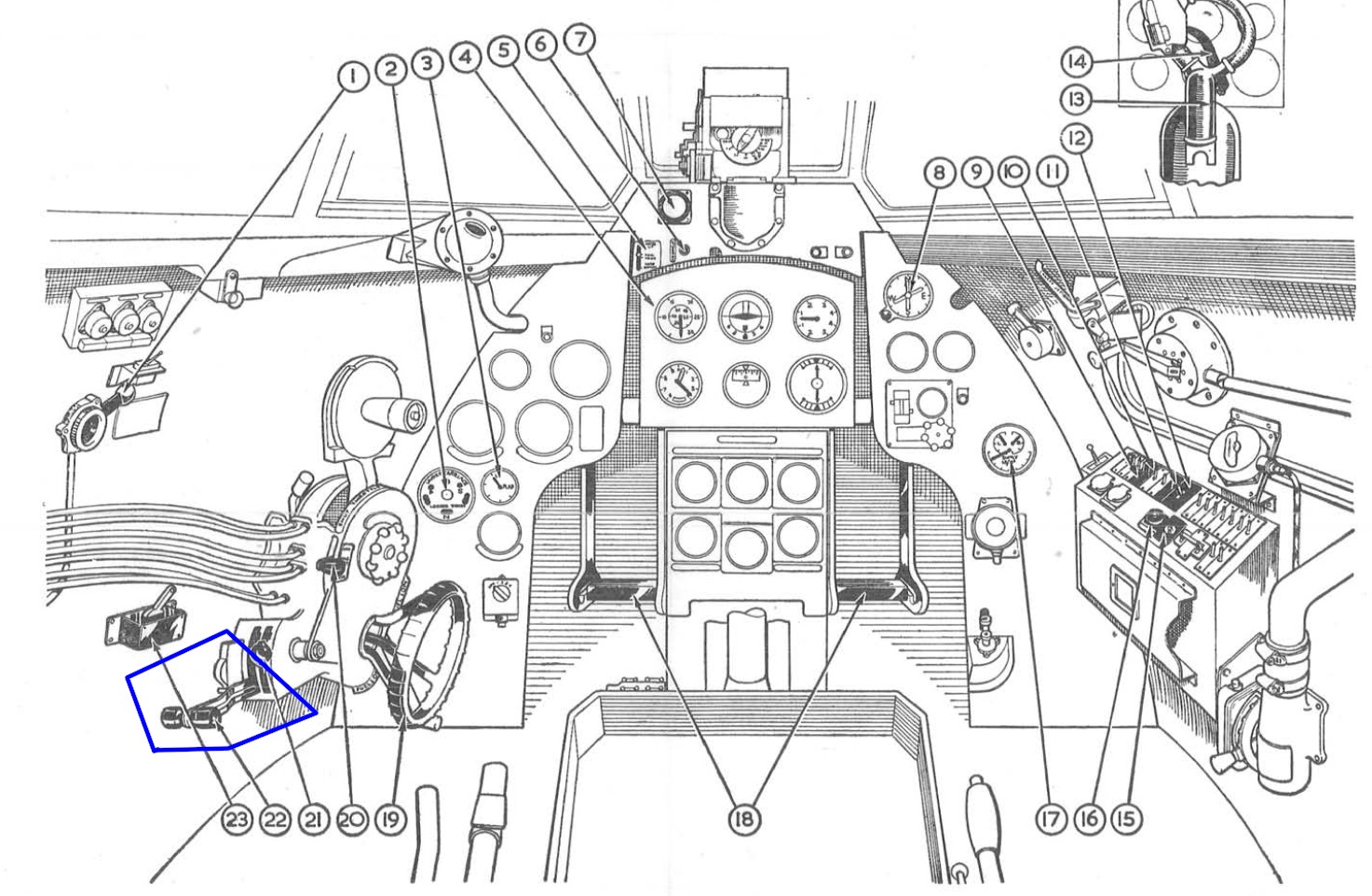 Inside view of the cockpit – the two levers on the left, highlighted in blue were required to be ‘pressed in’ and ‘lifted’

Looking back now my stint as CI Hakimpet was quite eventful. What with this little episode, the Night Interdiction Operational Role during the 71 War, a C of I which spanned three reviews as the result of both pilots ejection from a Trainer on a ‘purported’ Tail Chase exercise authorised by me. Not much of a ‘hot pilot’ really, more of a ‘hot potato’!!!!

Well I guess its ‘ALLS WELL THAT ENDS WELL’!!!!

Anil Kumar Gupta (Lui), from the 37th NDA/ 106 pilot’s course, finally got commissioned before the 108th course after recovering from the accident. He went on to serve the IAF for 25 years flying nearly 3,000 hours across a number of aircraft types including Vampire, Hunter, Gnat, Mig-21 FL/ Bison, Kiran MK-II and Ajeet.