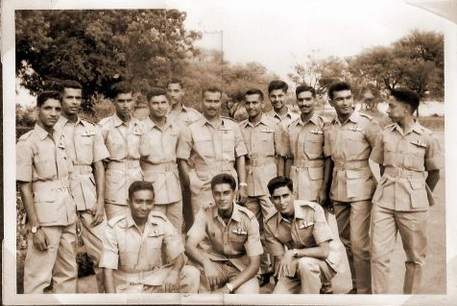 "Newly Commisioned "  'Pilos' after the POP on 16 Oct 1965. A coincidence --- Everyone standing on the left of Sqn Ldr Joseph and all three kneeling down are fighter jocks subsequently posted to 220 sqn -- KKD ! And, all standing on his right were posted out to 221 Sqn - Poona!. Photo Courtesy : Gp Capt A K Datta

The 94th GD(P) Course comprised 22 NDA cadets of the XXVI Course, 118 Direct Entry flights cadets of the First to the IX Entries and five ex-Airmen Entries.

The XXVI NDA Course strength was about 300+  of which approx 55 were Air Force cadets. The Course was nicknamed 'The Dambusters" as they reported to the NDA in the week spanning 12 July, 1961-- an unforgettable date as the Khadakvasla Dam burst that day and flooded out Poona City!  Buildings upto the first floor in some areas like Lakkar Pul were inundated; and, roads and train lines were water logged. Many of us were stuck at Stations like Bombay and beyond. And, were cleared to travel about 3 - 4 days later to reach a blacked-out Academy.

The Chinese attacked India in 1962 generating rumours that NDA cadets would be commissioned after the 4th Term and be sent out to op units at the battle front. Wishful thinking!! No such luck -- we became V Termers and spent time at the Air Force Training Team under the tutelage of Sqn Ldr Amanullah Khan with his "colourful" language! Due to a shortage of gliders and instructors, we were sent "Dolo" instead of graduating to a few sorties of solo too.

May, 1964, saw us Passing Out  of the NDA, being sent on 45 days leave to report to The Pilot Training Establishment (PTE) Allahabad for 50 hours of flying on the HT-2. The Direct Entry Cadets had undergone three months Initial Training at The Air Force Admin College, Coimbatore, flew light aircraft like the L-5/ Piper Cubs, et al. and then joined us at the PTE to fly 25 hours on the HT-2. Our unusually large numbers, the pressure from Air HQs to pass the course out on time, and other undiscerable factors, led to a large number of rejections from both the Direct Entry and NDA flight cadets.

Post-PTE, we were sent on a spot of leave after which we found ourselves at The Air Force Flying College (AFFC), Jodhpur, for the Intermediate Stage of our training on the Harvard T6Gs and the Texan single-engined piston aircraft. Dual checks, solos, GFAs, aeros, triangular X-country flights, bit of instrument flying and flying tests saw us through the Intermediate Stage with a very low level of rejections.

We were then ordered to proceed on 30 days leave enroute to our final stages of flying training. To our utter consternation, halfway through our leave, we received a cryptic, ominously worded telegram (in AF Signal language), " Leave extended 15 days. Report Air Force Technical College (AFTC), Jalahalli, Bangalore, on cessation of leave." ---- Period !!!!!! No reason !! No nothing!! No by-your-leave !!

Phoning up friends multiplied our fears viz. Post the Chinese aggression, Air HQs (and the Nation)  had panicked and produced too many pilots -- so the Powers-that-be have now decided to make engineers out of us ! Luckily for us, after a few anxious days, Cdt No 4482 / Flt Cdt No 170211 found out that as the Course Senior-to-us had not finished their flying Training due to a grounding of ac, and as some Govt of India order did not permit Flight Cadets more than 45 days leave at a time, we were being sent to AFTC in a sort of a 'holding pattern'. We all breathed easier after that!

Our stay at the AFTC was a one crazy tenure. The staff appeared to have no idea what to do with us during working hours until we found  ourselves herded into class rooms and some existing Tech preces were issued to us and a few unfortunate Tech Staff detailed to conduct classes "just to keep us 'quiet' and, hopefully, occupied'.  But, early morning PT classes turned out to be sheer fun. Being ordered to run around the games field  with one poor Joe-Sucker of a Flt Sgt detailed to supervise a whole lot of Flt Cdts, found the run degenerating into ever-decreasing concentric circles until a Cadet (with extra intiative) yelled " Break-off"! And, that was the end of the "PT Parade!!"

Still at AFTC. One day we found that the Tech Cadets were avoiding us as if we had some deadly, communicable disease! Discrete enquiries revealed that the poor Tech cadets had been ordered "Don't talk to those Pilot Types". I do suppose that the Tech Staff were at their wits end -- we were a rowdy, noisy lot - but, this sort of an order did get a lot of Flight Cadets' dander up!!  And, for no fault of theirs, the poor Tech Cadets were subjected to cat calls, calls of "Left, right," "Eyes Right", "Dig your heels in", etc, whenever they had to pass us by in a squad of 3 or 4 !!  After a few days, wisdom seems to have prevailed, and, things were back to normal!!

We then found out that AFTC, Jalahalli, was an old Second World War Italian POW Camp. We were hemmed in with tall barbed wire on the perimeter walls. Week-end passes were only being given to local Tech Cadets and  a few GD cadets with the acting ability to make their sob-stories seem real!  Stan was the only smart one to get himself admitted to the MH, get friendly with the nurses -- and 'Do The Bunk" every day !

Some one found that a remote corner of the  POW Camp had some Contractor's rubble piled up almost to the top of the wall --with a convenient hole cut in the barbed wire on top. He shared this vital gen with some of us. The modus operandi was to jump over the wall, head for the Baker's Shop, change into civvies at the back, walk a little distance off to the next Bus Stop, make it to town -- and the reverse actions on the way back. All went well until one working afternoon, the Stn Cdr's Daughter had come to the Bakery and saw a number of cadets go into the back and come out in their civvies and walk off. She, obviously, mentioned this to her Mom or Dad -- and their were a number of us doing a punishment defined as "Confined to Camp"   A bit of an 'oxymoronish' term considering that we were anyway confined in a POW Camp  -- But, this punishment required reporting to the Main Guardroom every two hours!

All good things come to an end -- and so did our sojourn at AFTC, Jalahalli -- much to the relief, we presume, of all concerned!! For the first time we split to our various flying streams for our Final Stages at the Jet Training Wing and The Helicopter Training School, Hakimpet; and The Transport Training Wing at Yellahanka.

The Final Training Stage went by in a whirl. until 02nd September, 1965. We reported the Flight Offices only to find no instructors !! In one swift and very silent move they were all airlifted to op locations to take part in what is now known as the 1965 Indo-Pak War. We Flight Cadets were issued .303 Rifles and rostered onto a  Guard Duty Watch. Sqn Ldr Joseph was the lone QFI left behind at JTW and he kept us adequately occupied with some lectures during working hours.

The end of the War saw the QFIs return to base from their op locations with interesting tales of "Real Ops!" And, also, sad stories of our pilots lost in the attacks. Flying resumed with a purpose and zeal which found us all involved in low-level sorties. The best was that all formation rejoins to circuit were at deck level with an upward peel-off to downwind.

This post-war frenzied flying training also came to an abrupt end  when Air HQs issued orders to stop flying training and release the Flt Cdts of the 94th GD(P) and 32nd GD(N) for Practice Passing Out Parade (POP)   practice.

We were told that the Govt wanted a POP as a morale booster for the Nation and the "Reviewing Officer" would be the Chief Of Air Staff !

The above  is a very short account of our Course's History. To add meat to the account, all Course mates are requested to put Course Snippets and Photographs on the NET. Thereafter one of our "Computer Savvy" Coursemate or his Mate could think of making this gen into a COURSE BROCHURE for issue to all at the WGC Dinner.

Our Course mate AVM HS "Harry" Ahluwalia has done a lot of spade work to make this 45th Commissioning Anniversary a memorable event.

He has planned that we all meet at Wellington from  23 May, 2010 to 27 May, 2010. He has managed to reserve 35 Rooms at the DSSC, Cordite Factory, Aruvankadu, and the MRC Officers' Messes. A series of activities have been planned from 24th to 26 May, 2010. The feasibility of hiring of Tpt has been worked out.

The Photo Albums contributed by our Course mates are at the following links on Picasa Web: