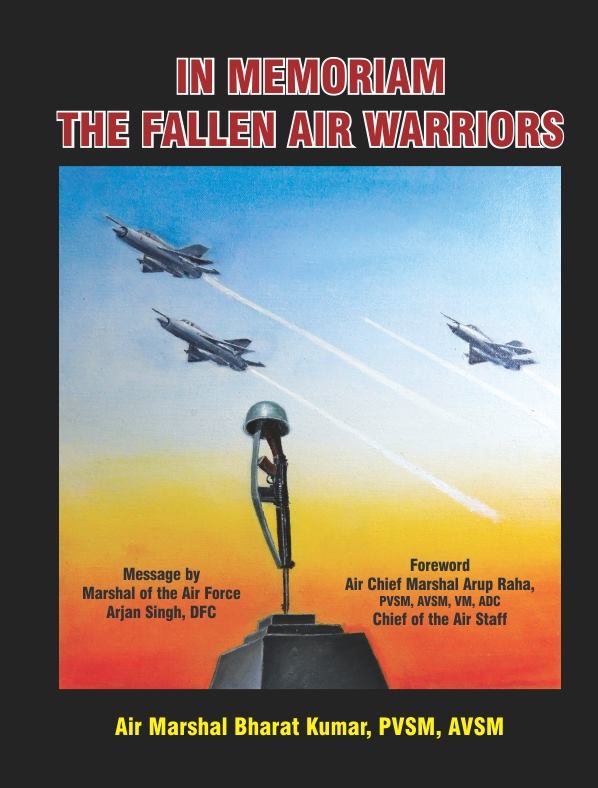 This is a book that should have been written long ago – too many of those who perished in the service of the country in the Indian Air Force have been forgotten. For some families, there has never been closure, because a lot of the time the circumstances that killed their near and dear ones were never clear to them.

My mother and father had to perform the solemn duty of informing the families of those who had fallen only once. Unfortunately it was a crash of a transport aircraft and they had to visit nine families. That crash (with Sqn Ldr Chugh and Sqn Ldr Verma as pilots) is in this book. (My mother still goes solemn when she remembers how broken Mrs Verma was). I too had forgotten their names, but am grateful that I was able to honor the memory of those men through this memorial. I also remember, whenever I got picked up from Palam airport by my father, he would point out a spot where Baldy Mehta had perished after a flame out in a Gnat. My father was the first one to reach him. He would point to the spot, sigh and be silent for a while.

I see a number of familiar names in the book – some of them my father’s friends, coursemates and colleagues. Some of them were killed during wartime but a surprising number were killed in accidents. Military aviation is unforgiving and military aviators assume far more risk even in roles such as transport support. The venerable Douglas DC-3 Dakota in IAF service has over 50 accidents with at least two thirds of those being fatal. Given that most Dakotas had a crew of at least 2 people and often 4 (two pilots, navigator and signaller) even if one didn’t count the passengers and rear crew, the number of Dakota fatalities were comparable to the fatalities in MiG-21s (which has had 200 odd accidents according to one count). Fighter operations (especially of Mach 2 fighters like the MiG-21s) are generally assessed to be higher risk. However flying fully loaded aircraft with marginal performance in some of the toughest terrain in the world is not without risk.

Air Marshal Bharat Kumar is a historian par excellence, his service experience and knowledge of the Indian Air Force have produced a number of excellent volumes that will be historical records to be quoted from in the future. His excellent book on the 1948 Kashmir Air War “An Incredible War : IAF in Kashmir War 1947-1948” ,his book on awards to IAF personnel “Courage and Devotion to Duty” , his book on the 1962 Sino-Indian war operations “Unknown and Unsung” and his book on the 1965 Air War “The Duels of the Himalayan Eagle” should be required reading for IAF personnel and indeed the Indian public. I know first hand how far and wide he cast his net in trying to get photographs of each and every person in this book. I am also aware of his tenacious but gentle persuasion when it comes to IAF history – he called me repeatedly in the US till I delivered the manuscript (written by Wg Cdr Sadatulla) for “1962 Air War : Supplying from the Air”.

I also see names of people of my generation. These were my NCC batchmates from all over the country – IM Singh and Rajan from Delhi, Kadam from Bombay and Anil Raj from Bhopal. I had heard about their passing and it was poignant but strangely comforting to see their pictures and remember them.

I heard from a friend of mine, who is an IAF spouse, complain that “now we have to deal with the spouse being around” in reference to spouses of fallen comrades. It used to be, the family of the deceased left the base in a short time after the accident. There was not a constant reminder of the passing of the person and people could move on. But now, with many families in which both husband and wife are Air Force officers, the remaining spouse continues with his/her duty. I don’t think my friend was being callous, but the new circumstances call for new adjustments to be made.

I also see that there is a sharp decrease in the number of fatalities in the later years covered in the book. This is encouraging, because the IAF’s accident rate was too high by any measure in the past. Perhaps the sacrifice of the people in this book has put in place systems so that very few would be called up to make that ultimate sacrifice.

In Mexican folkfore, there is a belief that one is not truly dead and gone till there is no one who remembers you. Hopefully the people in the book can now be alive in our memories forever.

Webmaster’s Note : The concept of books based on aircraft accidents and losses, or of airmen lost on operations and in peacetime is nothing new in the litterature world of the RAF or World War Two Research. However it is unheard of in the context of Indian military history for such a book to exist. Previously the Indian Air Force did produce one book “The Memorial Book” which was devoted to war time casualities. It was a restricted publication that was not available externally.  Air Marshal Bharat Kumar’s book is a pioneering effort to chronicle the names of all the airmen lost – whether in peacetime or in war. The book attempts to put a face or a photograph to every air warrior lost in a flying incident.  Granted that this work is not 100% accurate but it is the closest that one would hope to achieve for some time to come.

It is disconcerting to note that even though the book is a officially sanctioned by the Indian Air Force and the United Services Institute, many photographs could not be traced – implying either a gap in our record keeping practices or an unwillingness by our record keepers to go an extra length to trace these photos from official records and provide them to the author.  Air Marshal Bharat Kumar had to chase down photographs from personal contacts.

While the book is a tribute to the fallen air warriors, it may be a disappointment for those undertaking more serious research into the circumstances of these incidents. Understandably, the Author had deliberately stayed away from mentioning anything about an incident beyond the date , type of aircraft and the unit the airman belonged to.  The objective was not to increase the pain and loss already experienced by the families.  This is understandable from the point of view of a brother officer who had served in the same shoes as some of the fallen.  For families who have been trying to find out the circumstances of the accidents years ago, eg Second World War, or the 50s, the answers cannot be found here.