Sentinels in the Sky

Sentinels in the Sky 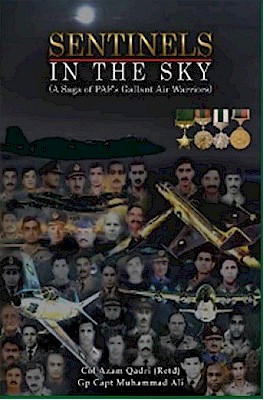 Sentinels of the Sky is the latest offering coming out of Pakistan. The book profiles the Gallantry Award winners of the Pakistani Air Force across the various India-Pakistani Wars, as well as a selection of senior officers that are considered legendary in the PAF.  Jointly authored by an Army Officer, Colonel Azam Qadri, and a PAF Officer Gp Capt Muhmmad Ali, and published by the Jang , Its a massive book, profiling about 104 officers and airmen of the PAF.

Some of the material has already been covered in several of the PAF's previous books. But since it is organised by individual persons, it is a delight to find all the info related to one officer or airman in one location. Where the book excels is that the profiles go beyond their war time career, and details the pre-war and post-war careers all the way upto retirement where it applies. Family background and details of where they are now supplement the material very well. The profiles are accompanied by many rare photographs, originating from  collections of the veterans or the families. This overall view of the awardees, their lives, photographs are of immense value to the historian looking beyond the regular war histories.

Many unknown facts and stories come to light in this book. The most fascinating one is about Flt Lt Murtaza Malik, a Canberra crew member shot down over Adampur and who died of wounds in an Indian Hospital. What should have been a fairly well known story (as the family and the Pakistani Consulate knew) was forgotten over the years. The story re-surfaced a few years ago when Kaiser Tufail wrote about it in his blog. It is fascinating to read the story again in detail in this book, along with the photographs of the funeral procession that were forwarded by the Red Cross to the family. There are other stories and factoids, too many to list out in this short review.

While the book does a wonderful job in its coverage, there are quite a few flaws in it. In trying to cover only the 'Gallantry Awardees', the book ignores those who died in the operations and were not decorated.  While covering some 'legends', it also ignores many of the stalwarts. Its understandable that M K Janjua left in disgrace, but his contributions in the early years of the PAF must have meant something.  Haider Raza, a soft spoken gentleman officer from Lucknow, and of the same seniority as Asghar probably never existed as per the book. The rationale behind covering some and ignoring others has never been fully explained.

The book also dances around 'unpleasant' facts. How inconvenient would it be to mention the incarceration of Bengali Officers like Saiful Azam when they are being profiled in this book? or to add a few lines to the profile of M G Tawab narrating his BAF Career, apart from just mentioning that he 'retired' in 72?  And by not mentioning Mitty Masud's dissent at the use of PAF Sabres against the Bengali Population, the authors take away from the PAF one of its shining moments in the otherwise depressive chain of bad decisions taken at that time.

All this is nothing compared  when you find out that the the author's shied away from discussing the actual events of the war, instead relying heavily on past published official accounts and official citations. A repetiton of the same claims from the official histories, unchanged in these fifty years does a disservice to both the officers profiled as well as the new generation of readers. The honour of those who fought bravely in defence of their country does not get diminished by accepting the fact that some of the events did not happen the way they were originally perceived by them.  So it gets a bit tiring reading the same old claims that withstood for fifty years - eg "14 Canberras at Kalaikunda", "14 aircraft shot down over Dacca by the Tail Choppers" and so on and so forth. It is clear there was very little effort was made to refer to Indian accounts, or even the contemporary accounts from Pakistan like "Great Battles of the PAF" or "Flight of the Falcon", even though the latter has been listed as some of the sources.

Lastly the authors has been a tendency to not acknowledge the sources of some of the data correctly. Footnotes and references are missing. For example - the WW2 profile of Air Marshal Nur Khan was lifted,lock stock and barrel, from the livefist site. The account was shoe horned into Nur Khan's profile without any footnote explaining where it came from.  But considering that the authors otherwise carried out such a momentous task of compiling these accounts, This reviewer is willing to let go of this personal affront. (Full disclosure - this reviewer burnt some mid night oil writing that profile of Nur Khan)

But all the complaints apart, I would rather have this book than no book at all.  It is a nice surprise in both its size and content coming out of Pakistan. The last time, this reviewer enjoyed reading a Pakistani book was "Flight of the Falcon" by Sajad Haider.  While this book does not compare with Haider's grasp of writing, It is a valuable addition to the existing litterature of the Pakistan Air Force and the wars it fought with India.