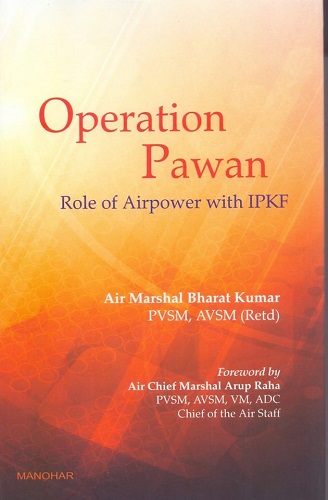 Air Marshal Bharat Kumar has already established himself as one of our foremost aviation historians with his previous works on the 47-48 War as well as the Gallantry and Service Awards to the IAF. He has forged a reputation of willing to take up most difficult tasks of chronicling air operations of chapters in Indian History that no one else has the resources or the expertise to even contemplate. In his latest offering, he chronicles the role of air power with the Indian Peace Keeping Force in Sri Lanka 1987-1990. Departing from the usual practice of covering just the Indian Air Force, the author has taken up the gamut of air operations run by the Army Aviation as well as Naval Aviation.

The result is a mammoth book on the IAF, IA and IN's aerial operations in Sri Lanka during the years of the IPKF. A book that spans 426 pages, copiously illustrated with rare photographs and referenced by footnotes, it is a tribute to the air and ground crew who supported the IPKF operations.

The author starts with providing the genesis of the Sri Lankan problem and India's efforts to intervene on behalf of the Tamils. Chapter 2 details meticulously the planning and thought process behind Operation Poomalai, which can be termed as the opening gambit of the India's intervention by using Air Power.

Chapter 3 deals with the Induction of the IPKF and the IAF/AAC aviation components in Sri Lanka. For those who are aware of how the Sri Lankan operations transpired in the early days, the details of the haphazard induction of troops and equipment into the Jaffna peninsula are not surprising. The author digs deeper to reveal some dangerous (And sometimes humourous) aspects of this rushed operation. Troops being transported by air with live munitions - mortar bombs and grenades - Army units trying to be airlifted lock stock and barrel (literally) and all at the same time.... Read the book to actually understand the previous statement!

The tragic and ill-fated Jaffna University Helidrop and the subsequent battle for Jaffna peninsula comprise Chapter 4. Once again, yeoman work has been done in fleshing out details of the helidrop - especially from the point-of-view of the ground operations.

Similarly , the induction of the Mi-25 helicopters, a first for the IAF is narrated in detail as well. No stones are un-turned in the effort. The meticulous arrangements the IAF took to avoid civilian casualities is explained in detail, and yet in cases where the casualities did occur, the author does not mince words in narrating where the fail checks did not work. The subsequent chapters after the taking over Jaffna Peninsula do get bogged down in details. Since most of activity was supporting the Army anti-insurgency operations, the narration of events tend to get a bit tedious, but this has more to do with the general timeline of activities than anything.

The author's efforts was hampered by missing records or by general disinterest of the IAF at that time to keep a record of events. This was overcome partly by interviewing the veterans involved. Its a thankless task that could not have been accomplished by anyone else. The Indian Air Force's efforts in the entire duration spanned tens of thousands of sorties, by far the longest "war effort" in its history. For years the veterans who took part in the operations did not feel like talking about it or shown general disinterest in recording 'history'. With 25 years having passed since the commencement of this effort, it was time for the IAF to put its history of operations in Sri Lanka on record. Air Marshal Bharat Kumar has stepped in and completed this task on the Indian Air Force's behalf. Its a praiseworthy effort that deserves the thanks of all Indian Aviation Historians of this era.