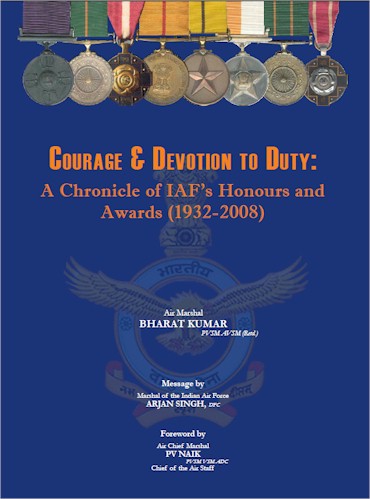 This book is one of my proudest possessions on the history of the Indian Air Force. Air Marshal Bharat Kumar has produced a real labour of love to collect almost all awards given to IAF, with perhaps less than half a dozen citationss missing. Despite the author's committed efforts, these could not be included only because no published information about them was available anywhere. Photographs of around 97% of awardees are included. The book contains records of all awards earned by the Air Force from its inception in 1932 to 2008, including the five years during which it was RIAF. Apart from learning about the great achievements of our peers and friends, it has been a remarkably good source of the history of the Indian Air Force. While this expression of my views on this book could be interpreted as its review, in fact it is also my personal vote of thanks to the author.

The book may well be unique as no similar collection has been mentioned in the social media for any defence forces. I learnt about it when at my request the Air Marshal reproduced the citations for the gallantry awards for LRD (Creamy) Blunt, MO (Micky) Blake, GD (Nobby) Clarke, Desmond Pushong and others for their valour during the 1948 Kashmir War. Most of them had emigrated to Australia and did not have any idea of what the citation of their awards had said about them. The number of awardees who have never seen, or who no longer have copies of their citations, is by now unacceptably large.

For the families and descendants of award winners, Courage & Devotion to Duty is a remarkable source of important family history, to be cherished for ever. It is a source of pride for them to discover the significant deeds of their loved ones and how these were officially recognised and duly rewarded by the Nation. Obviously, it is vital that access to this book should be made easier in the interest of the IAF itself. Apart from boosting morale, the book may well inspire the young to follow in the footsteps of the persons who contributed their effort and often their lives to the benefit of the country and the Air Force. It is strongly recommended that all Air Force Stations which maintain libraries for their personnel and families should keep one or two copies of it. In fact for training establishments and Air Force Schools making this book available to students should be made compulsory by IAF.

The first forty pages of the book need special mention. These contain a comprehensive history of awards from the earliest days to 2008, starting with a Vedic quotation. This part is so important that IAF would do well to include it in the curriculum of every initial training institution. It would inform and inspire those about to begin their Service careers. It may even inculcate a genuine sense of pride in our beloved Air Force. Libraries of the other defence services and even civilian libraries should seriously consider including this book in their inventories.

Every book aspires for a five star rating and only a few would make the cut. Almost none can exceed the rating scale -  But this book is an exception and should be rated higher than Excellent - not just in the scope of effort and coverage, but also in terms of quality of production and pricing. If there ever is a list for "Top 5 books for the IAF Aviation Historian", Air Marshal Bharat Kumar's book will inevitably be in that list.