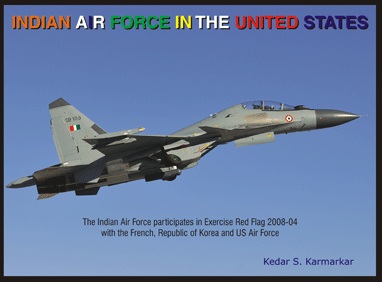 When the Indian Air Force sent a detachment of eight Su-30MKIs to participate in the US Air Force’s RED FLAG exercise in 2008, it went largely unremarked, except by a dedicated core of IAF and Su-30 watchers – like this site!  The IAF has flown alongside the USAF before, as long ago as the Burma campaign of World War 2 – when IAF and what were then US Army Air Corps aircraft and aircrew flew wing-to-wing.  And the two air arms have regularly exercised with each other in more recent years.  But RED FLAG 2008-04 was a significant first in many ways.

Kedar Karmarkar was among a small number of die-hard photographers and enthusiasts who spent long days in the desert sun during the exercise, with tripod and accessories bag, at locations arranged by the USAF’s Public Affairs Office, photographing the aircraft and people of the two largest democracies in the world exercising together.  Some of his photos went on-line even before the exercise was completed.  However, as we all know, there is a delight in poring over such pictures in a solid, printed book; something that can be carried around, shown to others, left on a coffee table, and in other ways savoured, that on-line viewing simply cannot match.  (Otherwise, if Kedar and the publishers will permit the comparison, why would anyone buy the print copy of the Sports Illustrated Swimsuit Edition? )  In early 2009 Kedar teamed up with Anveshan Publications, to bring out this 88-page book, showcasing the best of his photographs of the exercise in a conveniently-sized high-quality printed volume, with some commentary and background text.

Among the on-line communities of those interested in the modern Indian Air Force, and aviation photography more broadly, Kedar Karmarkar already has quite a reputation.  His photographs of modern aircraft, many available on-line at his website, are remarkable; and demonstrate both his artist’s eye for a pleasing composition (check the pictures in which the sweeping curve of a Su-30’s LERX is used to frame another aircraft), as well as an enthusiast’s interest in capturing the minutia of stores, accessories and markings (check the picture of the business end of an IL-78’s refueling pod).

For anyone who loves the modern IAF, this book is a treat.  It contains something approaching 200 colour pictures, lovingly (there is no other word) depicting Indian Su-30s, Il-78s and an Il-76 in close-up and in formation, on the ground and in the air, in full daylight and in some atmospheric shots at sunrise or sundown, at Mountain Home AFB in cool mountainous Idaho and Nellis AFB in the Nevada desert, with the glitz of Las Vegas in the background.  To an old aviation enthusiast like this reviewer, there is a special delight in the pictures of IAF aircraft, with their unmistakable markings, against the USAF hangar bearing the legend, “Gunfighter Country”, made famous by its appearance in some 1980s-era aviation-themed Hollywood movies  (sometimes completely inaccurately!).  There is also a nice leavening of pictures of the other participants in the exercise: US and Korean F-15s, Aggressor F-16s in multifarious colour schemes, French Rafales, EA-6B Prowler electronic warfare and E-3C Sentry AWACS aircraft, KC-10 and KC-135 tankers and other support aircraft - and one gorgeous early-morning picture of an F-22 Raptor in flight.

Included towards the end of the book, after all this heavy iron, are more human-scale pictures of a lunch hosted by the Indian contingent inside a hangar, looking very much like a bara khana at an Air Force Station back home.  Then-Air Marshal PV Naik, now Air Chief Marshal and the Chief of Air Staff, features in some of these pictures, looking more relaxed than he probably does these days, in overalls.

The sheer technical quality of Kedar’s lenswork is sometimes stunning – he has managed to capture pictures of jet aircraft in flight, with open sky showing through the cockpit, in such sharply detailed focus that rank badges on the pilot’s epaulettes can actually be read through the canopy.

One could, if one so wished, record a few very minor gripes.  On one page, the same caption, referring to “a pair of F-15C Eagles”, has been reproduced under three different pictures.  There is also a brief mention of the lecture on the IAF’s participation by a USAF Colonel to the Order of the Daedalians society, which appeared uncensored on YouTube shortly after the exercise – my view would be that if it was necessary to include the reference to that entirely unofficial view, I would have included a little more of the equally unofficial rebuttal that Pushpindar Singh delivered.  And I would have asked for an index.  But even as I write, it feels churlish to say so – at least I have these great pictures in a nicely portable format to hand!

This RED FLAG exercise marked the first time Su-30MKIs have operated outside India, and the first time this aircraft type has gone head-to-head with the aircraft of its old Cold War adversary.  For these reasons alone, the Indian participation deserves to be documented in detail, as Kedar and Anveshan have made an excellent contribution towards in this book.

Finally, for those of us who bemoan the paucity of good books and media on the Indian armed forces, and their sometimes inadequate PR, we should perhaps look at ourselves, and ask if we are adequately demonstrating, with our pocket-books and credit cards, that there is indeed a market for media products that showcase the Indian armed forces with respect and affection.  For that reason too, I would strongly recommend this book – to borrow a phrase, Just Buy It, folks.  People like Kedar and Anveshan make big investments, to bring these pictures and other material to us; and they need to see some commercial return, if they are to be encouraged to continue (and improve!) their offerings to us and our fellow-enthusiasts.