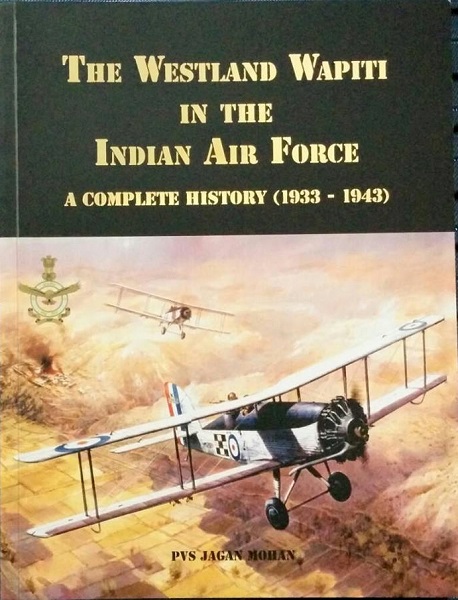 Who would have thought that a detailed history book can be written about the IAF’s first aircraft?  The Westland Wapiti in Indian Air Force Service (1933-1943) is one such book. Researched with the help fo a grant from the Center for Armed Forces HIstorical Research of the United Services Institute, this book is a pioneer in the field of aircraft histories. It was officially launched by the IAF on 5 September 2014

Foreword by the Marshal of the Air Force Arjan Singh DFC

Almost eighty years ago, on 1 April 1933, the first unit of the Indian Air Force was formed at Drigh Road, Karachi with a compliment of four Westland Wapiti aircraft. The single flight expanded into two, then three flights to become a full fledged squadron. Over the course of the decade, several Wapitis passed through its hands. The advent of the Second World War saw the setting up of training facilities for Indian pilots, and the raising of several flights – for Coastal Defence and for Anti-Aircraft Co-operation. By the time the last of the Westland Wapitis stopped flying in 1943,  67 Wapitis had passed through the hands of the IAF and training units.

Using previously unpublished documents and sources, dug up from the archives and collections of India, Pakistan and the United Kingdom, this book,  traces the history of the aircraft’s service with the IAF – the operations it took part. The book charts the history of every single individual airframe that flew with the Indian pilots, accompanied by photographs where available. A roster of all Indian and British aircrew who flew the aircraft will round off he effort. Several appendices of useful data on the Wapiti are provided.

The book features over 200 rare photographs – of aircraft, aircrew, documents. A significant portion of these are previously unpublished or seen. Illustrations include Squadron and Unit Badges, Colour profiles and Cutaways.

The foreword is written by none other than the Marshal of the Air Force Arjan Singh, the senior most Wapiti pilot from that era and a legend in the IAF.  The book will have Frank Munger’s cutaway diagram and color profiles by Juanita Franzi, reknowned illustrator from Australia.

This book is planned for publication in the summer of 2013 – under the aegis of the Center for Armed Forces Historical Research (CAFHR). The Centre for Armed Forces Historical Research (CAFHR) has been established by the Council of the United Services Institution in consultation with the three Service Headquarters. Its aim is to study the history of the Indian Armed Forces with objectivity – covering different facets – strategic, tactical, logistical, organisational, socio-economic policies – and their implementation.  The CAFHR has been instrumental in unearthing a treasure trove of information on the aircraft that made this book possible in its intended form.