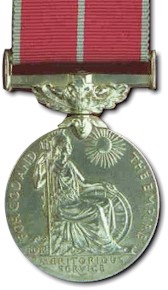 The British Empire Medal replaced the Medal of the Order of the British Empire (1917-1922) and had a military and a civil division. The medal was awarded for meritorious service which warranted such a mark of royal appreciation. The award was mainly awarded to Other ranks and Non Commissioned Officers.