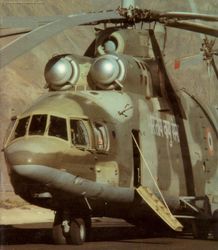 Serviceability of the Helicopter suffered in the 90s, at one point of time in 1995-96,  as many as three of the four helicopters remaining on ground.  Serviceability gradually fell in the mid 90s from a high of 61% down to 40%.  The helicopters also remained underutilized. Against a projected utilization rate of 50 hours per month per helicopter, the average utilization hovered around 11 to 22 hours per month.

The first two Helicopters procured in 1986 were due for an overhaul in 1990. The two helicopters were ferried to Russia for overhaul in June 1991 and were returned in August 1993.

The fourth Helicopter came up for overhaul in October 1996 and was given an extension of an year after maintenance by the Base Repair Depot. However the helicopter suffered some damage after one of the undercarriage struts failed in August 1997.  The damaged helicopter was subsequently overhauled by the manufacturer in January 2003 at a cost of Rs 16.8 Crores.

During the Kargil Operations, two Mi-26s logged about 25 hours airlifting heavy equipment and guns to the Kargil area.

In July 2005, a Helicopter of the unit landing at Rampur in Himachal Pradesh was damaged after the rotor got entangled in high tension electrical cables. The aircraft was being used in helilifting heavy road building equipment in the area.

One Mi-26 (Z3076) was written off after it crashed at Jammu airport on 14 Dec 2010. It was involved in the heavy lift of tunneling equipment for the Northern Railways. The crew escaped with injuries. This was the first and till date the only major airframe loss for the Mi-26 in nearly 25 years of service.

The Mi-26s have been utilised in the sky-crane role over the years.

- Feb 89, MI-26 helicopter undertook the only of its kind underslung operation taking Pontoon bridge form Ludhiana to Sirhind canal.
- Early 1999, a crashed MiG-21 was airlifted by the Unit to Chandigarh.
- 21 Nov 2001, the Mi-8 which crashed in the Rann of Kutch was helilifted by the Mi-26s to Bhuj.
- 2002, a MiG-21 Bison which crashed in the fields near Ambala was airlifted by the Unit to Ambala Air Force Station.
- In Jul 2002 the Mi-26 recovered the first civilian aircraft (Beechcraft), which had met with an accident at Kangra airfield. Another first was achieved as the unit flew the longest ever underslung flight (3:15 hrs).
- 22 Feb 2006 - An Mi-26 flown by the CO, Wg Cdr Sushil Ghera, airlifted an Mi-17 that forcelanded in a river bed a few days earlier to Chandigarh Air Force Station.
-Sept 2007 - Mi-17 1V airlifted from Bandipore to Awantipura
-In 2010, the helicopter was actively used to lift heavy equipment for the Katra-Quazigand Railway project providing rail connectivity to the Srinagar Valley.