Eight  fighter squadrons and two other units had the pleasure of flying the Tempest II in RIAF/IAF service.

No 1 Squadron ‘The Tigers’

From Yelahanka to Risalpur (from Spitfire Mk VIIIe under Sqn Ldr Ranjan Dutt) in May 47. Convert to Tempest II at Peshawar in Jul 47 under Sqn Ldr AR Pandit. Operations over Swabi and Kalukhan. Selected for assets to be handed over to PAF No 5 Squadron on partition. Last flight ferry of PR 600 (by Flt Lt LM ‘Baba’ Katre and PR 718 Peshawar-Miranshah-Risalpur. Stood Down night of 14-15 Aug 47. All aircraft left behind and Indian personnel repatriated via train from Kohat.

Conversion started at Pune in May 1947 under Sqn Ldr A Murat Singh. Sqn Ldr Meyers of RAF providing the initial conversion training. Squadron received 7 Tempests from No.8 Squadron. Squadron remained in Pune till end of 1947 when it was disbanded.

No 3 Squadron ‘The Cobras’

Convert with No 5 Squadron RAF Apr 46 at Kolar under Sqn Ldr Atma Ram. Command to Sqn Ldr MD Suri from 30 Dec 46. To Kohat Apr 47. Detachments at Risalpur and Miranshah relieving No 5 Squadron RAF. To Poona pre-Partition in Aug 47. Enroute fly Independence Day flight past over National Stadium, Kingsway with eight Tempest II (along with 10 Sqn). Command to Sqn Ldr Randhir Singh on fatal accident of MD Suri in bad weather on 28 Aug 47.

No 7 Squadron ‘ The Battleaxes’

To Risalpur from Miranshah 17 Apr 47 to convert to Tempest II (after handing over Spitfire Mk VIII & few XIVs to Drigh Rd) under No 3 Squadron RIAF at Risalpur, the CO Sqn Ldr ML Mishra going solo on 02 Jun 47. Command to Sqn Ldr SB Noronha, Personnel evacuated by air to Agra on 16 Aug 47 leaving all aircraft behind to RPAF. Then equipped with five Tempest II and one Harvard. Five Tempest II detachment to No 1 ALG, Amritsar in Nov 47 to support of 161 Brigade HQ. Permanent move to Palam under Sqn Ldr ED Massillamani in Feb 48 with eight Tempest and single Harvard IIB. To No 1 (Operational) Wing at Advanced HQ at Srinagar till of end of hostilities 01 Jan 49. Then Palam, absorbing Aircraft Testing Unit (ATU) with three Vampire Mk IIIs on 01 Jul 49 with Sqn Ldr CD Subia taking over on 22 Jul 47. Command to Sqn Ldr BS Dogra on 16 Dec 49 and last Tempest IIs flown to Chakeri on 30 Dec 49. Convert to Spitfire XVIIIs with No 101 PR Squadron (on PR Mk XIXs).

No 8 Squadron ‘The Eighth Pursoot’

Arrive Kolar from Trichinapoli in Oct 46. Convert to Tempest IIs but retain few Spitfire Mk VIIIs. To Poona 13 May 47 then Palam Feb 48 under Sqn Ldr Padam Singh Gill. Detachment to Jammu 16 Jan 48. Command to Sqn Ldr Amrit ‘Aunty’ Lal Beri from Apr 48 and move to Palam Jul 48. dett to Jaipur 19 Jan 49 and back to Palam 28 Feb 49. Hand over Tempests fro Vampires on 15 Nov 51.

Returned from Mingaladon (Yangon) to Bhopal at end of WW II on Spitfire Mk VIII then Mk XIV. Ferry 27 Apr 47 and hand over Spitfires to Drigh Rd Karachi and few to Ambala and move to Peshawar to convert to Tempests under CO Sqn Ldr Akhtar ‘Tubby’ Khan. Convert May ’47 under supervision of ex 30 Squadron RAF pilot. Selected for assets to be handed over to PAF on partition. Leave all aircraft behind to PAF and escape to India via various means including one pilot stealing a Tempest and flying via refueling stop at Rawalpindi to Palam.

No 10 Squadron ‘The Daggers’

Convert to Tempest II at Chakeri under Sqn Ldr H Moolgavkar from May 47. Detachment to Palam for fly past over National Stadium on Independence 15 Aug 47 and over Red Fort on 16 Aug 47. Detachment to Ambala from 30 Oct 47 to take part in operations against Pakistani invasion of Jammu & Kashmir. Operate detachments at Amritsar and Srinagar from Nov 47. Command to Sqn Ldr ZA Shah Dec 47. To Srinagar May 48 then Palam Oct 48. Command to Sqn Ldr CG Devasher 10 May 49 then GK John in Jul 50 and then PW Powar in Aug 50. Detachments to Ambala and Jodhpur in May 50 and move to Barrackpore Feb 51. To Halwara Apr 52 and command again to Sqn Ldr GK John from Jul 52 then to Sqn Ldr CHL Digby in Oct 53. Move to Palam in Dec 53 and convert to Vampire FB Mk 52. 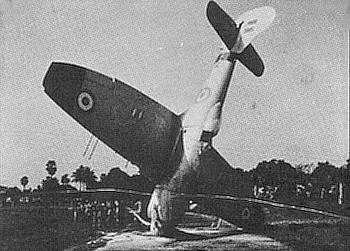 Tempest HA 464 of No 10 Squadron rests on its nose after Flt Lt Dilbagh Singh aborted take off and retracted undercarriage on 30 Jan 52 at Agra. Photo courtesy: Hony Flt Lt B Daniel, then duty medical assistant in crash bay ambulance. 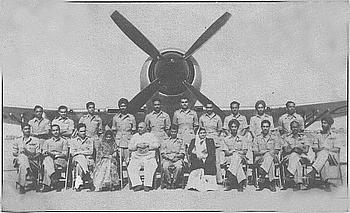 The First Course on Tempest IIs commenced Sep 49 at Ambala with 49/50 pilots course initially as a conversion flight under Flt Lt Mc Neil and then under CO Sqn Ldr AV Samsi. Moved to Hakimpet in Sep 51 and commenced training with No 55 pilot’s course with a mix of Spitfire T Mk IX and Tempest II, under Chief Instructor Sqn Ldr EZA Shah VrC. Tempests stood down on last day of 1952 with completion of 58 PC. 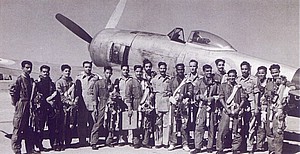 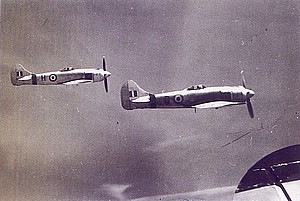 Commenced operations as a flight with four Tempest II under Sqn Ldr PP Singh from Jamnagar in mid 54. Handed in Tempests for Toofanis (MD 450 Ouragon) Jul 1955 becoming last unit operating the Tempest II in IAF service. Coincidentally the RAF had also decommissioned their last Tempest TT Mk 5s from 233 OCU at Pemberey in the some month.