The seed to design and develop an Intermediate Jet Trainer was planted in July of 1999. This bold move bore fruit on 07 March 2003 when the IJT prototype flew for the very first time. The official flight followed on 21 March 2003 in the presence of many dignitaries. On both these occasions Squadron Leader Baldev Singh was able to execute planned manoeuvres for a duration of about twenty minutes on the aircraft[1]. The rapid success of the IJT brings into focus numerous aspects within the Indian aeronautical industry. In this article we will briefly examine some of them. The IJT was conceived to replace the Kiran [1]. The Kiran was designed in the 1960s and it is the current entry-level jet trainer. It is also used by the national aerobatic team, the Surya Kirans (Sunrays). The general level of satisfaction in the Indian Air Force with its performance is very high. However over the years the IAF had seen a sea of change in their operational aircraft. With the induction of several high-tech platforms like the MiG-29, Mirage 2000, and now the Su-30MKI, a need arose to revise the training of pilots. 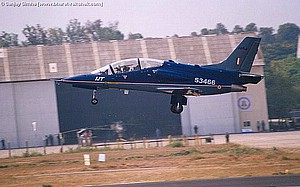 The Kiran was able to meet the immediate expectations but emphasis was placed on acquiring an Advanced Jet Trainer (AJT). The AJT acquisition has run into rough weather over the issue of cost. At this point an indigenous alternative must have seemed attractive. However indigenous development of an AJT was a complicated matter. In the early 1980s, the Government of India had launched the Light Combat Aircraft (LCA) programme to indigenously design and produce a combat aircraft capable of meeting India's defence needs. The LCA programme though enormously slow in actually producing the aircraft, was very quietly contributing to the confidence and the technical competence of the aeronautical community in India [2]. Thus in 1999 a proposal from Hindustan Aeronautical Limited (HAL) and a nudge from the heads of the technical advisory community was enough to drive the idea of designing and developing an Intermediate Jet Trainer (IJT) within a very reasonable price and little time.

HAL's Aircraft Research & Design Center (ARDC) was tasked with design and development of the IJT. Partnering with the ARDC was the Aeronautical Development Agency (ADA), the agency responsible for the design and development of the Light Combat Aircraft (LCA). A number of Public Sector Units (PSUs) and associated government agencies also participated in the IJT project. Two foreign companies that made major contributions to the project were Snecma Moteurs/Turbomeca and Smiths Aerospace. As with all major defence projects, the Government of India (GoI) provided the financial support for the IJT.

Clearly, the experience gleaned from the LCA project was arguably the most important of the enablers for the IJT. Teams that worked on the IJT had been exposed to the LCA while working in various capacities on that project. Beyond that, at this point in time, it is rather difficult to pin point the contributions made by the LCA project, time will expose those important details [9]. The role of Government of India (GoI) is also describable as that of an enabler. The GoI has shown interest in defense related fields in the recent past, however, this is one effort that stands out. It is interesting to note that the GoI has visibly seized upon the ability, confidently 'pick a winner' in the aerospace market. Although difficult to quantify, this will definitely bode well for the Government in the future. 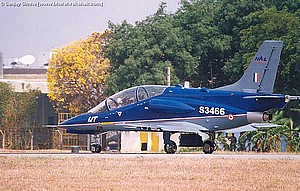 The ARDC relied on software to reduce the design & development cycle. The software from Unigraphics provided two major functionalities: 3-D CAD/CAM and data management. The 3D CAD/CAM was used to design subcomponents, components, and large assemblies and even complete mock-ups of the aircraft. The data management software allowed the data associated with these designs to be shared among various teams. Coupled with Virtual Product Development (VDP) modeling and support for product development process threads, various teams were able to create, test, document and manufacture components digitally. Collaborative building and the ability to test different versions of the same component in real time optimized time utilization [8].

Snecma Moteurs and Turbomeca delivered two of the Larzac 04H20 engine that powers the current and probably the next IJT. The 1440 dN jet engine was first fully flight qualified on an Alpha Jet flying test-bed [4]. Smiths Aerospace was selected to provide an open architecture mission control computer, head-up display units, HUD repeater, a rear entry panel, and altitude and heading reference system and air data computers. It may be noted that Smiths also works with HAL on supplying instruments for the IAF's Jaguars and the proposed BAE Hawks [5]. Thales of France supplied the 3ATI and 4ATI displays, along with angle-of-attack, temperature sensors and accelerometers [6].

In our discussion, we rarely make an argument for basing aircrafts acquisition on Human Engineering (HE) factors. Basically HE, with respect to an aircraft, relates to aircrew-aircraft compatibility. The clearance over the head of a pilot, the ability to see over the nose or over either sides, seat shape and size, clearance during ejection, reach to various instruments: mostly associated with dimensions within the cockpit. The Hindustan Jet Trainer (HJT) 36 is the first Indian trainer built with Indian anthropometrical data of a male pilot in mind. The entire layout of the cockpit, including the main instrumentation panel, is based on HE. Again, software was used to design and animate human movements. With emphasis on HE during the design phase and with total control over it due to the acquiring of data related specifically to Indian pilots, training future pilots should become that much more efficient [7]. 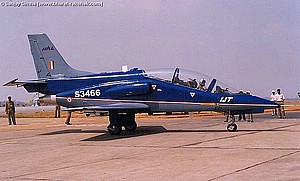 Sanctioned with a grant of Rs. 180 crore in 1999, the plan is to build a few more aircrafts for demonstration and certification processes. To the credit of the management team, these funds will suffice till the aircraft reaches serial production. Considering all factors, the development costs are a fraction of what most similar aircrafts have cost [3]. As compared to the Kiran, plans call for an increased lifespan (10,000 hours), more armament carrying capabilities (1000 kg) and a higher maximum speed (700 kph). A second prototype is expected in August of 2003, which will be fitted with advanced avionics [10]. As a vote of confidence, the Chief of Air Staff has placed an order for 16 HJT-36s, meant for the national aerobatic team, the Surya Kirans. A second vote came from the Scientific Advisor to the Defence Minister Dr. V.K. Atre, who said, "We are few more steps to the AJT and a larger LCA, the mid-combat aircraft" [11].

As we look into the future we expect improvements in the present HJT-36 prototypes. Few details have been released by HAL on what the final HJT-36 will contain. One would expect it to be a mature product with standard features such as fly-by-wire flight controls, wide angle HUD, HOTAS controls, MIL STD data-bus, helmet-mounted target designation and integration with equipment and weaponry from disparate sources. Snecma has already proposed an enhanced jet engine for the production IJT and hopefully that is just the beginning. There is also talk of a production run of 200 aircraft [1]. 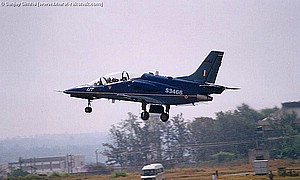 A favourite with the crowd is the possibility of morphing the IJT into an AJT. Two design ideas leap out with this in the background. The first is to add another engine. A tandem engine configuration have been seen in recently designed AJTs, the HAL designed AJT would look fairly similar to those. The second suggestion revolves around replacing the present Larzac engine with a more potent engine, perhaps a de-rated Adour. The Adour is currently in use in the indigenously manufactured Jaguar aircraft. No matter which design is preferred by HAL and its design team, the pressure to design and develop an Indian AJT will be immense.

The HJT-36 allows India to build any of the following:

1] A basic trainer, suitable for basic jet training.
2] A trainer for basic combat use of unguided weapons, air-to-air missiles and sea targets.
3] A combat trainer with under-wing hardpoints capable of launching guided missiles and using guidance equipment pods.
4] A single-seater tactical fighter, with guns, all-weather radar for use of AAMs and ASMs.
5] A Coast Guard SAR aircraft, with a nose-mounted search radar.
6] A sporty private jet for enthusiasts.

Finally, the Intermediate Jet Trainer project has proved that international cooperation is the way of the future. This sort of venture is bound to attract several investors from all over. The author extends his congratulations to all the parties and wishes HAL and the development team the very best for the future.