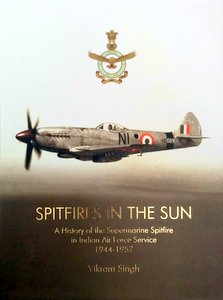 This painstakingly well researched book is an insightfully informative tribute to an all-time great fighter from the era of piston engine aircraft, which blazed a glorious trail in the annals of air combat, during the closing decade of the first half of the 20th century. It also burnished its name and fame on the template of conventional dogfights, using front guns as the primary and only armament, both in India and the UK.

That was just before the cusp when jet propelled fighters began jockeying for space in the wings to make a heralded entry on the military aviation stage to replace piston engine fighters. While not claiming to be a definitive or seminal work as such on the Spitfire (there are numerous other books which have done that earlier!), this book seeks to tell the story of this Hall of Fame fighter aeroplane's exciting innings in India, on the backdrops of WW2, the Kashmir operations & the post Independence India decade.

And it does a very commendable job of it, too!

As lucidly brought out by the author Air Cmde Vikram Singh, the ‘Spit’ adorned the skies of the European and the India-Burma theatres of WW2 with as much élan and grace as a phenomenal flying machine with its elliptical wings, as the grudging respect it drew from its German & Japanese air adversaries for its agility and lethality as an air combat fighter par excellence ….…first with the Rolls Royce Merlin engine and later with the more powerful Rolls Royce Griffon engine.

Although towards the closing stages of WW2 it was overshadowed by the North American P-51 Mustang (in range & firepower) and the German Focke Wolf 190 (in range and manoeuvrability) over Europe and by the ultralight Japanese Mitsubishi Zeke aka the ‘Zero’ (in manoeuvrability) over Burma, the Spit managed to hold its own there. It went on to play a stellar role (in what was veritably its swan song as the principal war fighter of the IAF!) during the Kashmir operations, in 1948, against the invading hordes of Pakistan sponsored ‘tribesmen’ (sic), in the ground attack & PR roles.

Between 1949-53, “the old order had begun to change rapidly in the IAF fighter inventory, yielding place to the new”. The first jets, the Rolls Royce Goblin powered British DH Vampires arrived in India (7 Sqn ….…The Battleaxes) in 1949, making IAF the first Air Force in Asia to acquire jet fighters! It was soon followed by the Rolls Royce Nene powered French MD Ouragan (Toofani).

In its last two variants in the IAF, the Mk XVIII & Mk XIX, the Spitfire was perhaps the only fighter aircraft in IAF livery (or elsewhere in the world) at the time and for the following many years, that could exceed the in-flight thrust-to-weight ratio of ‘1’ at certain low fuel states, in clean configuration, at low ambient temperatures and at full throttle. It was before my time but we had heard that it was thereby able to stay vertically pointing straight up, at zero indicated air speed and zero rate of climb or descent ……hanging as it were in the air, on the propeller disc!!

The IAF-ization of the Spitfire or, more appropriately, the Spitfire-ization of the IAF actually began in 1943 when IAF pilots like then Plt Offr (later ACM & CAS) Idris Latif were sent to the UK to convert on the Spitfire Mk V, at Rednall. The 'Spitfire in IAF' story began with the ferry in of a Mk IV PR version, on 05 October, 1942. The author, Air Cmde Vikram Singh, has done an excellent job of narrating the IAF Spitfire story by walking the reader very engagingly and lucidly through a Spitfire-centric maze of WW2 history of the air and ground wars, in India and on the Burma front. He has skilfully woven the Spitfire narrative into the fabric of the overall war effort of the South East Asia Command then under the Lord Admiral Louis Mountbatten.

The breadth and depth of the author’s coverage of the larger Allies-Axis war in the India - Burma theatre is very judiciously tailored to provide only the essential broad military overview of and a historical context to air operations by the IAF in general and its Spitfire employment in particular, in the second Burma campaign. It is a fine & accurate treasure trove of documentary information on the IAF Spit.

In this rather successful balancing act, author Vikram Singh has managed to produce a succinct, high fidelity and inclusive historical account of the war in general and operations of this formidable fighter aircraft in particular, both during the war years and during the following decade, in the then India skies!

The book also serves as an eminently readable primer on IAF history from inception in 1932, through WW2 & the Kashmir operations, up to and a bit beyond the dawn of the jet era in the IAF. Gifted genetically, well motivated, well trained & highly qualified professionally, the author has diligently produced a very readable, profusely illustrated tome! Almost all IAF celebrities and place names of yesteryears (pre & post Partition) figure in those pictures.

Although replete with precious information, it may not be a serious history buff’s one-stop, comprehensive reference work. It will, however, still meet many of his needs, moving with great facility & impact from the coffee table to the study table to the bedside table of most readers!

This beautifully produced book is for all those who hunger for something that would grippingly meet their mixed need for authentic, historical as well as leisure reading on the Indian Air Force in the early years of its birth, through WW2 in South & SE Asia & to the post -Independence decade. That plus the Spitfire and its derring-dos in IAF service, makes this book quite unputdownable! I am one of those!

The profusion of carefully selected & very contextually placed pictures is a considerable value addition to the text and immensely enhances the overall appeal of this book. It is verily a warm and accurate tribute to the brilliant decade plus innings in the IAF of this redoubtable British piston engine fighter that became a ‘legend in its own time’ (a la Bat Masterson of the Wild West, in the US of the 1880s!): the Supermarine Spitfire!!