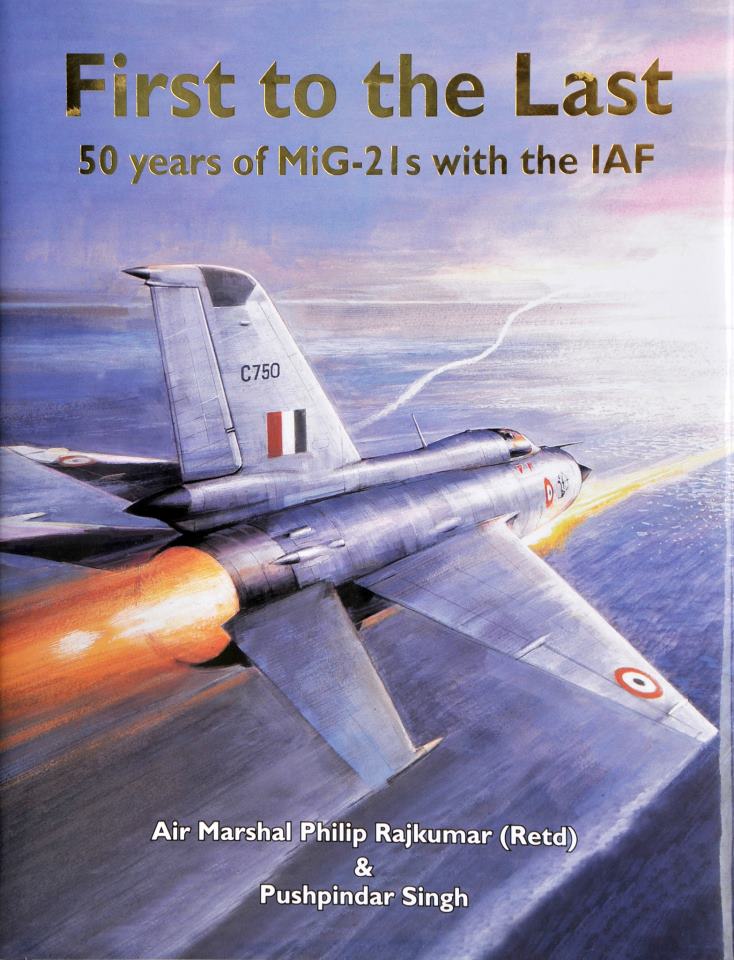 It is unfortunate that this book has been published in a “Coffee Table Book” format, - broad and flat with plenty of pretty pictures . One tends to look at Coffee Table books for light “time-pass” reading and in this case this format devalues the excellent and valuable written material by multiple authors who are themselves names to remember in Indian military history, each writing about their life with the MiG 21, an aicraft that has embedded itself in contemporary Indian history in so many ways. But more of that later, first the details.

“First to the Last – 50 years of the MiG 21 with the IAF” is a hardbound 170 page volume 8 inches across by 11 inches high. There are over 200 pictures and illustrations – some familiar to the aviator or enthusiast but many are new. There are 21 chapters (I wonder if that is by design or a coincidence) , some written by well known names like current CAS Air Marshal NAK Browne, former CAS Air Marshal Tipnis, Air Marshal Philip Rajkumar and Air Commodore Suren Tyagi who has the distinction of flying the maximum number of hours in MiG 21. Five appendixes at the end provide some detail about the MiG company, HAL, MiG 21 squadron insignias and other sundry information. The quality of printing and binding is good.

This book would be a valuable volume in the hands of anyone who wishes to study Indian military history or even the evolution of air power in the subcontinent and how the IAF, under constant pressure from adversaries who received state of the art aircraft as free gifts, inducted, adapted and used a non-western supersonic aircraft, used it more effectively than anyone else in the world and helped in defeating, nay routing, opposing forces who were using highly acclaimed and proven aircraft. What is clear throughout the book is that the MiG 21 came with several handicaps such as poor cockpit visibility, short legs, light armament, intense pilot discomfort from the restrictive and hot “cosmonaut's” flying suit and helmet they had to wear. This aircraft was converted into a fearsome war machine primarily in Indian Air Force service.

Another thing that comes out very clearly in the book is that everyone who flew the MiG 21 loved her and considered the aircraft to be a safe and well behaved thoroughbred in which they could beat any other high performance aircraft in combat. Considering that these words have come from at least two people who later became chief of air staff, this information cannot be dismissed lightly as it has been in the lay media who have played an ignorant and unfair role in painting the MiG 21 as an unsafe aircraft.

On the role of the lay media in giving a needless bad reputation to the MiG 21, Air Marshal Satish Inamdar (later vice chief of air staff) writes with some angst saying

“It hurts like hell..this public perception was criminally unfair and contagiously demoralizing both within the air force and outside” . Former CAS AM Tipnis notes that the MiG 21 was used as a trainer (due to the absence of a viable advanced jet trainer. In a moving piece, Tipnis writes, ”The MiG 21 has taken hundreds of pilots onto her lap, taught them, challenged their skills, done their bidding, executed their tasks, brought them indescribable joys, carried them though their occassional crassness and and alas, sometimes succumbed to her own frailty, or to her rider's ineptness. How many of the privileged few, who have tasted the ecstasy of the blue yonder with this trusted mate, have felt they had their maker's final call, but had it adjourned to another day through the blessed stubbornness of our beloved lady to protect her own?”

Various chapters cover every aspect of the MiG 21 in the IAF and every version, with the modifications and drawbacks or advantages of each, learning to fly the MiG 21 in Russia and in India, combat in the MiG 21, systems and maintenance issues and even the commonest caues of accidents. The collection of articles include some that have appeared in previous editions of “Vayu”, and some new ones. All in all a large part the history of Indian military aviation and the struggle to modernize the air force and keep it as a state of the art and effective fighting force comes out in the depth of knowledge and attention to detail that every author displays. This book is truly a must have for aviation enthusiasts and students of Indian military history.

Now for the quibbles and whines. The book lacks an index. Since the book is so rich in infornation, searching for that information is impossible in the absence of an index. For example there are three separate references to why the IAF did not upgrade the MiG 21's engine from the R 11 to the R 13, but eventually went on to up-engine with the R 25. An index would greatly assist search for such information. Similarly a search for the use of K-13 missiles and later upgradation to fire other missiles would be greatly assisted by a comprehensive index. Another oversight is that the book really should have had an appendix with the photographs, names and a short bio data of all the authors – all of whom have been prominent names in the Indian Air Force. Another nice touch would have been a table listing air combat kills of the MiG 21. The information is all there within the book, but a table, aided by an index would have been icing on the cake. I sincerely hope that this book reappears as a second edition with a comprehensive index. In 25 years time the information inside should be available in libraries and not lie forgotten on the bookshelves of aged enthusisats after a single print run.