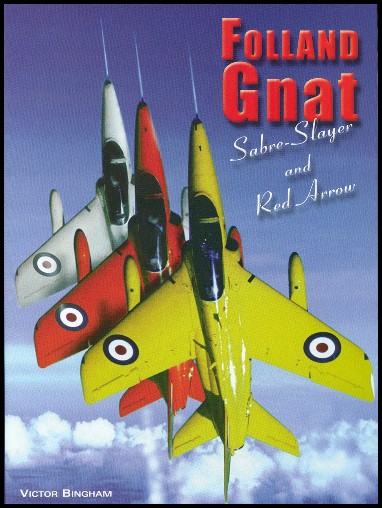 A review of Victor Bingham's book, "Folland Gnat: Sabre-Slayer and Red Arrow", published in 2000 follows; with the proviso that they are not exhaustive, and are oriented towards the points of interest previously shown by IAF enthusiasts.

The first point to be made is that the book is largely a development history rather than an operational history. It is aimed at telling the story of the Gnat's development, the conceptual and technical problems it had to overcome, and the commercial and political constraints (particularly the lack of official British support for the Gnat / light fighter concept) which led to Folland's eventual absorption into Hawker Siddeley, en route to British Aerospace. It is not a detailed operational history or analysis, on the lines that some of us would have liked to see.

Then, as previously posted, the author has made it clear that the Indian Air Force and HAL did not respond to his "numerous written requests" for co-operation and information. For the Indian operational story of the Gnat, he has therefore had to rely on third parties, published information, and "British personnel" (for which, on some occasions, I rather suspect, read John Fricker). So the story is often told from the Pakistani viewpoint rather than the Indian, to the point that Bingham has the names of the Pakistani pilots, and not of the Indian pilots, in some of the encounters he is describing. This means that the numbers of aircraft involved sound as though they are taken from Pakistani accounts (ie bumped-up numbers for the IAF aircraft and reduced numbers for PAF aircraft involved); and that damage caused by the Gnats is described from the other side, usually minimised.

However, I do feel that given all those constraints, Victor Bingham has made a genuine attempt to represent the record of the Gnat in Indian Air Force service honestly and positively. The result isn't perfect -- and it certainly isn't a mindless hagiography of the Gnat -- but given how widespread among British aviation writers the Pakistani version used to be, it is a huge improvement on most previous accounts. In particular, he has clearly taken some previous British writings on the Sabre vs Gnat record with a gigantic pinch of salt.

For starters, his tone is clearly respectful of the training and professionalism of both adversaries -- as I would expect from a writer who was a professional military aviator himself. On the actual combat record of the Gnat in the IAF, he writes as follows; my comments being in box brackets []:

- He does describe the "Sabre-Slayer" appelation as "possibly a touch of propaganda" [Which I am prepared to let pass, since he re-uses it so prominently in his own title]; but

- He adds, "... the Pakistan Air Force have claimed that not one Sabre was lost to a Gnat, but there appears to be a certain amount of inaccuracy about this statement, as will be related later" [And how!!];

- "Although the Hunter had a higher maximum speed and a greater acceleration than the Sabre, and the Gnat a faster climb speed than either, neither of these two aircraft could out-turn the Sabre, and were forced into a turning combat due to the known carriage of the Sidewinder missiles on the Sabre -- and in a combat it was never known which Sabres carried them!" [A disadvantage the IAF had to face, which I feel many historians do not sufficiently emphasise.]

- On the 3 Sept encounter: "The air war commenced with a Pakistan Air Force CAP ... From the Indian side Squadron Leader T Keelor led a section of Gnats ... Pakistan GCI gave the Sabres a vector to enemy jets at 36,000 feet [Surely that can't be right? The Mysteres were at 1,500 ft; the Gnats even lower] ... no contact was made. However four Gnats were seen climbing to the attack, so the overload tanks were punched and the Sabres pulled into a climbing turn. Flight Lieutenant Y Khan got a note indicating his Sidewinder was locked on, but then felt a number of thumps on the fuselage and saw two Gnats on his tail. [Keelor and Krishnaswamy? Or Pathania, and / or Sandhu and Gill?] ... upon opening up the engine ... the aircraft suffered excessive vibration ... Breaking off combat, Khan stuffed his aircraft's nose down and headed back to base. Landing his damaged aircraft at Sargodha, Khan was shocked to see how badly damaged his Sabre was, for as well as a burst tyre, most of the upper part of fin and rudder was damaged, as was the left elevator, and another shell had entered the fuselage behind the airbrake." [An awful lot of damage, for three shells -- which is all that some accounts concede hit Khan.]

- On the 4 Sept encounter: " ... four Gnats escorted four Mysteres ... Four more Gnats [Was it four more, or the same four??] led by Wing Commander [sic] Green were following ... they were instructed to intercept four Sabres attacking the Akhnoor bridge. Diving in to the attack, the section of Gnats were able to attack the Sabres before the F-104s sitting as top cover could take action, one of the Sabres fell to the guns of Flight Lieutenant V Pathania, the pilot ejecting safely, and another Sabre was claimed by the other three Gnats."

- He describes an inconclusive action on 8th Sept, between two Sabres, flown by Sqn Ldr Muniruddin [presumably Muniruddin Ahmed, KIA later in the war] and Flt Lt Choudry [presumably Cecil Chaudhry], and two Gnats, which is said to have resulted in damage to one of the Gnats. [I have not seen any account of this, in the Indian official history or in the BR account.]

- On the 13 Sept encounter, he writes that Flight Lieutenant Yusuf fired at and hit a Gnat, which was seen to be diving vertically in flames. The description of the encounter matches that in which No 2 Squadron lost Flt Lt AN Kale's Gnat; however Bingham writes that the IAF pilot, "Flight Lieutenant Bhapinder" died after nursing his aircraft back to base [??? Flt Lt AN Kale ejected safely];

- On the 18 Sept encounter, he gives a Pakistani version (that Sabres and AA brought down a Gnat each); but clearly does not believe it, and also gives a version crediting Sqn Ldr AJS Sandhu with a Sabre kill: "The opposite combat view was that on interception the Gnat section led by Squadron Leader A Sandhu, carried out a half roll, built up speed and climbed out. Sandhu aimed for a deflection shot on the first Sabre and saw shots strike home; then seeing another Sabre he reversed to the left and within 270 degrees in the turn came in line with the enemy aircraft, a quick burst ... and the Sabre burst into flames and exploded";

- On the 19 Sept encounters, he writes "The Gnats at approximately 300 feet pulled hard climbing turns ... a Gnat sub-section led by Flight Lieutenant V Kapila latched on to a Sabre as it took evasive actions following through until he had reduced the range to 500 yards when he fired ... and saw strikes on the Sabre. ... when at about 300 feet above the ground and at 300 yards behind the Sabre Kapila fired again and saw the Sabre explode on the ground". Further that "Squadron Leader Denzil Keelor meantime had latched onto a Sabre ... at treetop height and slipping in behind and at less than 500 yards fired ... ". He acknowledges that a Sabre flown by Flt Lt S Ahmed was so badly damaged that it crashed on landing; but also records the loss, in this encounter, of Flt Lt Mayadev's Gnat;

- On the 20 Sept encounter, Sabres against a composite of Gnats and Hunters, his description matches the Indian official and BR versions, in that we lost two Hunters, but a Gnat (Flt Lt AK Mazumdar, though Bingham doesn't identify him by name) brought down a Sabre;

He does repeat an old claim from the other side, that Gnats escorted the Canberras which carried out the resoundingly successful 21 Sept strike on Badin. I have been personally told, by the highly distinguished and credible officer who led that strike, that there was no escort. Well, if it makes the other side feel better ...

Overall, I think not too far out of line with the Indian official version -- though he misses Wg Cdr Bharat Singh's kill on 14 Sept (it was a manoeuvre kill; but then so was Alam's claim for Sqn Ldr AK Rawlley); and takes the position that Trevor Keelor's victim did manage to limp home. He does not provide an explicit For-&-Against kill-count, but if you count the above it comes to six victories (counting Trevor Keelor's -- which was a victory, if not a kill) and three losses (counting Flt Lt Kale, instead of "Bhapinder"). I can live with that. (The Indian official position, as all you guys know, is seven for three.)

- On the 22 Nov encounter, he gives the Indian version of three Sabres for no loss, and repeats, somewhat deadpan, the Pakistani claim that two Gnats were shot down;

- He also says, "The 11 December saw a Gnat of 18 Squadron prove its superiority over the Mirage IIIE when, during a high speed strike by PAF aircraft, a Gnat in defence slid in behind a Mirage as it pulled up and applied reheat, fired and claimed a kill as the Mirage went in" [I think this is inaccurate in many respects; though favourably to us rather than to Pakistan for once. We probably downgraded this to a Damaged rather than a Destroyed claim, later; it was on 10 Dec rather than 11 Dec; and if it was over Pathankot it was probably a Gnat of No 23 Sqn rather than No 18 (which iirc was Fg Offr NS Sekhon's unit)];

- Finally, his account of the action for which Fg Offr NS Sekhon received his PVC: "Srinagar airfield ... was the target ... for six PAF Sabre Mk 6s. During the attack only one Gnat managed to fly off, this was flown by Flying Officer Nirmaljit Singh Sekhon, who whilst still at low level managed to score hits on two of the Sabres before his Gnat was shot down and he was killed -- posthumously being awarded the Indian Param Vir Chakra." [Conforms to the Indian official account, if somewhat brief and understated, I feel].

Btw the first few paragraphs of the chapter in which these encounters are described include a short, inaccurate summary of the Kashmir issue. Bingham is clearly ill-at-ease with the politics; so I would not waste too much of our collective energy in countering it.

I should add that given the focus of the book on the Gnat's development history rather than the operational, there is plenty of material on HAL's work with the Gnat, all of which is generally very positive and respectful. (In fact Bingham is probably more positive about HAL than some contemporary IAF personnel would be.) But as pointed out to me by an IAF veteran from that period, the book does not give sufficient credit to then-Wing Commander Suranjan Das's contribution, as a member of Folland's development team.

One interesting item of information he comes up with (which I certainly was not aware of before) was that the Indian government offered Wing Commander WEW Petter, the MD and Chief Designer of Folland, a position in India to establish a design bureau. It seems Wg Cdr Petter himself was initially interested but, for whatever reasons, the possibility didn't come to fruition. If it had, we might have had Wg Cdr Petter instead of, or in addition to, Dr Kurt Tank, as a contributor to the establishment of aerospace design capability in India. Interesting thought.