During the last week of September 2002 attention of the Indian public and media was taken up almost entirely by the third phase of J&K elections, terror in Akshardham and of course the ICC Championship matches at Colombo. Another event of far reaching importance which occurred during this week did not therefore receive the prominence it deserved in newspaper columns and in public focus. This was the induction of a new multi-role supersonic fighter aircraft in the Indian Air Force. Addressing the gathering in a public ceremony at the Pune Air Force Station, the Defence Minister Mr. George Femandes lauded the success achieved by this remarkable acquisition programme in the face of unhelpful criticisms and other hurdles. As the CAS put it, "initially the skeptics doubted our ability to achieve such an enhancement in operational capability; when the weapon system became a reality, the same people turned around to question why the IAF needed such awesome capabilities!" 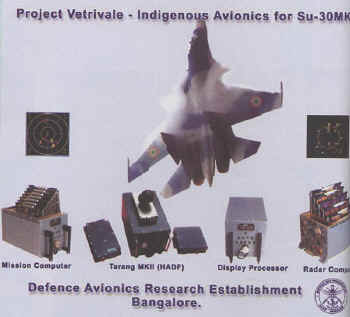 The Su-30MKI is considered to be the 'ultimate' evolution of the Su-27 originally developed by the Sukhoi Design Bureau in 1982 as a dedicated role air defence fighter (NATO code name Flanker). The multi-role capability now provided in the IAF aircraft includes air-to-ground attack, interdiction and long range strikes (in conjunction with mid-air refueling capability) in addition to the original air interception role. The Su-30MKI comes to the IAF with attack capabilities more advanced than what is available to most other air forces of the world including the Russian Air Force, thanks to a bold and farsighted approach taken by the IAF. The newness of the approach lies in the fact that the Ministry of Defence contracted with Sukhoi for these fighters to be supplied with significant upgrades in its manoeuvering, precision navigation and weapon delivery capabilities than what had been developed by the Russians until then.

The IAF also demanded that the upgrades be achieved with the incorporation of new & better Customer Furnished Equipment (CFE) including a significant element of Indian-developed avionics. It is obvious that a pro-active approach such as this was not without risks in the acquisition of a complex weapon system such as the Su-30. The major technical risk lies in the area of system engineering of the total weapon platform with newly introduced constituents. There is also the management challenge in convincing the Russian principals and others of the technical advantages of bringing in new 'western' and Indian avionics to co-exist with original Russian equipment. Judging by the remarkable results, the system engineering, integration and management complexities of such an acquisition project incorporating equipment from Russia, France, Israel and India have evidently been handled competently by the Indian team. It is to the great credit of all the principal players in this major programme that No. 20 Squadron ("Lightnings"), famous for its exploits with Hunters in the 1965 and 1971 wars, has now been inducted with this new and advanced operational capability within a period of 6 years from "go". More squadrons will follow and IAF rightly expects these to be the pride of its friends and despair of its foes.

It is a matter not merely of national pride but also of great practical advantage in terms of costs and maintainability that many critical elements of the new avionics suite of Su-30 MKI are designed indigenously. Advanced avionics were developed by DRDO under a project code named "Vetrivale" (a Tamil name for the victorious lance carried by the youthful Lord Karthikeya or Murugan, a son of Parvati and Shiva) in close collaboration with the PSUs and the IAF. Indian avionics have been received and acknowledged enthusiastically by the Russian principals. The core avionics designed by the Bangalore-based Defence Avionics Research Establishment (DARE) consists of Mission Computers, Display Processors and Radar computers which are now manufactured by HAL'S Hyderabad Division. The other DARE product Tarang RWR which is manufactured by BEL at its Bangalore facility, alerts the pilot to all surrounding "threats" such as radar-controlled guns and missiles for initiating evasive action or counter-measures. Tarang which was originally designed for the MiG-21bis modernisation programme is now a standard fitment in most of IAF aircraft. The DRDO has effected transfer of technology for the manufacture of all avionics to the PSUs after establishing the design soundness of such equipment through evaluation of prototypes. These avionics equipment have also been certified for their airworthiness in meeting the demanding standards of Russian military aviation. The integrated communication equipment and radar altimeters are of HAL's own design, already well proven in other aircraft applications. The cumulative value of such indigenous avionic equipment is estimated to exceed Rs. 250 lakhs per aircraft.

The expected size of the Su-30MKI fleet of IAF is around 180 aircraft. A very beneficial effect of this approach, in the IAF entrusting all of the core avionics to a single development agency, is that DRDO has been able to design the 3 on-board computers with maximum commonality of hardware and software amongst them using a modular approach to design. This obviously results in major cost and time savings in development; it also benefits the user in maintenance and spares inventories. In fact the DRDO has gone a step further and come out with a new design of the Core Avionics Computer (CAC) which can be used with a single module adaptation across many other aircraft platforms. Thus the CAC which is derived from the computers designed for the Su-30MKI will now be the centre piece of the avionics upgrades for the MiG-27 and Jaguar aircraft as well. The CAC was demonstrated by DRDO at the Aero India exhibition at Yelahanka and attracted a good deal of international attention. Taken together with the systems already developed indigenously for the LCA (such as the Digital Flight Control Computer and HUD), clearly Indian avionics have a significant export potential in the burgeoning global market for avionics modernisation.

Not only does the induction of this new 'Air Dominance Fighter' signify a quantum jump in the combat capability of the IAF; it also marks the success of a new beginning in co-operative ventures between the IAF, DRDO and Defence PSUs to great national advantage. "The Su-30MKI is a product of unique and successful experiment in management and cooperation in the field of design, development and production between Russian design and production establishments, Indian Defence R&D Laboratories, the IAF and HAL," stated Air Chief Marshal S. Krishnaswamy in his message issued on the occasion of induction of the new fighter. The significance of the success of Vetrivale and other similar indigenous programmes go far beyond their immediate financial impact in as much as they free India’s Armed Forces, even incrementally, from the debilitating shackles of imported equipment. Such large scale imports drain the limited modernisation budget of the Services, compromise security in some cases and progressively drive national technological and industrial capabilities backward. Coming as it does in the prevailing ambience of cynicism regarding indigenous capabilities and synergy between the Armed Forces, DRDO and DPSUs, the Vetrivale success story deserves to be told - and told more widely.