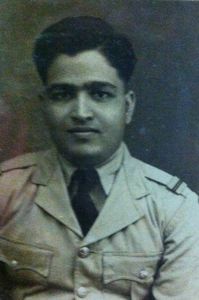 Trying to piece together my father’s past

It was late at night, and I was busy researching the family history I am still writing, tentatively named “The Family from Padma Vilas.” I was trying to piece together my father’s life, from his early days as a Pilot Officer in the meteorology department of the IAF to his later career as an I.A. & A.S. officer.

That night, while wading through the Internet I came across the Bharat Rakshak site. I couldn’t believe my eyes- this was almost too good to be true! Perhaps I’d get some authentic reports of a meteorologist on war duty! I clicked on the Air Force link, and then put my Dad’s RIAF number into the officers’ database. Lo and behold, his name came up, along with a few other details about him. But I wanted to learn more, much more. I read through some of the blogs, and then found one that was really funny – Cyclic, or Wg, Cdr (Retd.) Unni Kartha’s blog. ( http://cyclicstories.blogspot.com/)

I sent him a message, and told him about my project, and what I was searching for. I never expected a response.But, within the hour, Wg. Cdr. Kartha had replied, offering to help me out. Through him I was put in touch with Wg. Cdrs. Joseph Thomas and VG Kumar, and of course Jagan, an encyclopedia of knowledge on the Air Force. What struck me was the extreme open-mindedness and generosity of these gentlemen, who have been helping me along with all my queries, even the stupid ones!

My father, Mr. Padmanabha Krishnamurti, joined the Indian Meteorology Department in 1942, after passing out of St. Joseph’s College in Trichy with a first class in Physics (Hons.), as an aviation meteorologist. I have his letter of appointment to the IMD, as well as the invoice for the IMD application form, the grand sum of one rupee! Not to be scoffed at, as a rupee was a significant sum of money in those days. In 1944, he was commissioned into the I.A.F. (Met) as a pilot officer.

I have two very important documents with me- Dad’s parchment commission when he joined the IAF in 1944, and the Release letter from the RIAF, dated June 1949. With these documents, and a few sundry papers, I am trying to learn about the past, about what my father was involved with. I know from records that he served in Avadi, Ranchi, Ambala, Hyderabad, Cuttack and perhaps Jammu. The one interesting event I remember from family sources was that Dad had been in one of the RIAF helicopters that had strewn flowers over Gandhiji before his funeral pyre was set alight.

Dad had always been of a rather taciturn disposition, so his life in the IAF is one big jigsaw. I would dearly love to know from one of my father’s contemporaries what it was like being an aviation meteorologist during World War 2. But I know, this is a tall order. If Dad had been alive, he would have been 90. And I have another tall order- Dad’s dearest friend while in the RIAF was one S.K. Ekambaram. Does anybody know anything about this gentleman?

After leaving the RIAF in 1949, my father joined the Indian Audit and Accounts Services as a war service candidate. He had a long and distinguished career in the I.A. & A.S., but probably the highlight was when he was Joint Secretary (General) in the Ministry of Defence during the 1971 Indo-Pak war. Records show he acquitted himself very creditably in matters connected with operations, intelligence, ceremonials and war publicity. In 1973, he became an Additional Secretary in the MOD. Altogether he served for seven or eight years in the MOD, from 1970 to 1977. He finally retired as Secretary in the Ministry of Company Affairs in 1980.

My father was born under the sign of Aries, a sign associated with Mars, the planet of activity and assertiveness. I certainly believe his early years in the I.A.F. left their stamp on him. He was a true son of Mars throughout his life, and faced every challenge with courage and determination.

If anyone has any interesting news or information to give me about those times, I’d be more than happy to know. Every little piece of information helps. Thank you.