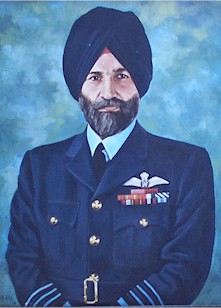 Its an end of an era - Marshal of the Air Force Arjan Singh, the only five star rank officer in the IAF, a legendary and much beloved name in the Air Force Fraternity is no more. He was the Air Chief during the critical 1965 India-Pakistan war at a young age of 46.  He passed away yesterday (16th September 2017) in New Delhi.  A statement from the Ministry of Defence said he was admitted to the hospital on Saturday morning following a cardiac arrest, and breathed his last at 7.47 PM.  Prior to his demise he was one of the last surviving officers of the IAF who had trained at RAF Cranwell, and also one of the last surviving DFC awardees of the IAF.

The Marshal had made an indelible impact on the Indian Air Force for genreations.  Much will be written about him in the forthcoming days, and many memories will be shared about him.  In our shared grief we should also try and celebrate a life well lived. His training days at Cranwell, to his leadership of No.1 Squadron in the Imphal Battle, to his command of the Indian Air Force in the 1965 War, his awards and recognitions and finally his entire career in the IAF are showcased in this website.

We are at a loss of words on how to describe this Icon of the Air Force.  There will be more eminent and qualified people speaking about him and his legacy.  Suffice it to say - Farewell Sir! You will be in our hearts forever.

Proceed to the rest of the site