Thirty three years of service and more than eleven thousand hours of flying, fortunately accident/incidence free: what does one have to show, after all that, almost a life-time in the Indian Air Force: well, as the great poet Ghalib said..

"A few portraits of the beauties
A few letters from the beautiful ones
Nothing more, nothing less!"

For those who value a portrait or a photograph, a note or letter from the loved one, its easy to understand that these mean more than awards or medals. I got hooked to photography a long time back when my father bought me a box camera. Thereafter the strong desire to share the magic and the mystery of the moments, intense feelings, out-of-the world sights experienced.

While flying over the dazzling Himalayas, deep-green, dense tropical forests of the foothills, barren but bewitchingly beautiful desert lands and the enormous blue expanse of Indian Ocean made photography a life-time mission, as far as I was concerned. I shared these moments with my parents, siblings, friends and colleagues. They were happy and I felt great that I could make them happy. I acquired better Pentax cameras, powerful lenses and more happiness

I was posted at No.40 Wing. The then Air Officer Commanding Air Commodore A.Y. Tipnis asked me if I could do some aviation photography and capture Mirages in air while flying. I jumped at the opportunity, flew with my friends Dhanda, Sinha, Neelu and Verma and the results turned out to be reasonably good. The photographs of the Mirage in air, with the river-bridge in the background and the one taken at twenty-seven thousand feet with a Mirage flying amongst towering clouds became popular and the blowups were presented by the AOC to the Command and Air Headquarters. The Era of Aviation Photography, in the IAF, had begun.

Air Headquarters decided to go in for a Coffee Table book. An international photographer could not satisfy Air Headquarters: the then Wg. Cdr. Narayanan and yours truly were summoned. The then Chief of the Air Staff, Air Chief Marshal S.K. Mehra called us for briefing. The briefing lasted thirty seconds. The guidelines, orders and instructions were crystal clear and sharp, "Okay boys, either I will have the best book in the world or we won't have it at all; remember your heads are on the chopping block." I was stumped, Narayanan was dazed. We walked into the then Vice Chief's Office in the same state. Air Marshal N.C. Suri smiled and said "So, you seem to have been briefed thoroughly."

The then Vice Chief, Air Marshal N.C. Suri and the then Director of Intelligence Air Vice Marshal S.K. Sareen, boosted our morale, encouraged us and gave us not only very valuable guidance but also all the facilities. The book began taking shape. Air Vice Marshal S.K. Sareen gave us his blessings and extremely valuable guidance in concept, visualization execution of the required aviation photography. His planning was perfect, guidelines very comprehensive and help, life-saving. For aviation photography, your mind has to travel faster than the aircraft, hands have to work faster than the fastest shutter speeds of the camera, weather favourable, sun at the right angle and of course the Almighty God, besides the Air Force authorities on your side. Flying, and that too with friends, was always welcome. The exercise took me all over the country, over extremely varied terrain, in all sorts of weather, with temperatures varying between 50º Celsius in Rajasthan to -40º Celsius at Siachen...and yes in almost all types of aircraft, in the Indian Air Force.

Once flying over the Southern coastlines, Eastern and Western coastlines, I was flying low, by the side of the oil-rigs, over the tall golden flaming flares. A MiG-23 was about to fire an air-to-air missile on an operational training sortie. I was with the then Group Captain 'Bundle' Tyagi in a MiG-21. We asked him to hold for a minute. Spotted him, closed in. It was already dusk, with the sun disappearing fast, beyond the horizon. I got the camera ready, opened the aperture, fixed a slightly wide angle lens, Tyagi formatted line-abreast with the MiG-23.

I adjusted the shutter-speed and called the pilot of the MiG-23, Flt. Lt. Karumbaya on R/T 'Ready!'

I clicked and caught the R-23 missile, just ahead of the MiG-23's nose, the fiery golden plume of the missile covered the fuselage of the MiG-23, lighting-up the underside of the wing. The sky above was still blue with some traces of cloud and the ground was getting darker. "We probably have the world's best picture of an air-to-air missile being fired, from an aircraft," I told Tyagi, "that’s what the boss wants."

I was flying with Sqn. Ldr. Talhan in a Jaguar over Pokhran; a MiG-23 was about to fire a salvo of rockets - sixty four in a second. My mind was working furiously faster. I asked Talhan to close in format on the aircraft and dive-in formation, wing-up to wing-tip. Fixed an 18º, wide-angle lens, opened the aperture, brought the shutter speed to 1/250th of a second to give enough time to capture some of the rockets, at the cost of some sharpness in the picture, but recording the entire environment, the blue sky above, the cloud spread of a stratus layer, the golden brown desert below and the diving aircraft, firing rockets, leaving a trail of smoke behind. The cinemascopic enlargement of this photograph adorns the August environment of the Chief's office in Air Headquarters, Vayu Bhavan.

A Jaguar flown by Sqn. Ldr. Dhar was going to drop eight thousand-pounder retarder-bombs on the range. The bombs go away in 1.4 seconds. I decided to shoot a sequence of four photographs, in this time, without a motor in my camera. Both the aircraft formated. We got in touch on R/T. He released the bombs, on cue from me and I clicked as if my life depended on it. It worked: I got the bombs being released, bombs with retarder parachutes open, and a huge dark cloud of smoke below. This sequence, probably rare, or may be the only one of its kind in the world and other photographs, mentioned above found the pride of place in the book, Touching the Sky.

Two Mirages and one MiG-29 took off from a forward-base, it was about to rain. The sky was filled with dark clouds. I was in one of the Mirages. We climbed to thirty thousand feet, to break clouds and get into clear blue skies. All three of us pulled-up, vertically and I clicked. It was pouring when we landed. Mukul, Rajguru, Cutinho and self could not get out of the cockpit for almost forty-five minutes. However, we had got our cover for Touching the Sky.

Su-30s brought in a new era in the IAF. There was an exercise going on in Pune. I was told to go and take part in it and photograph Su-30s. I got airborne in a Jaguar trainer, with Sqn. Ldr. Nanodkar to do co-ordinated flying with the Su-30 aircraft. The weather was marginal. The route chosen was Pune to Janjira, Shivaji's sea-fortress and from there to the temple of Khandoba, folk deity of Maharashtra and back to Pune.

It was a great sortie, some of the photographs turned out to be like paintings by great masters. I did not really do anything, I was just clicking. In fact, a great job was done by Nanodkar and the Su-30 pilots. Truly speaking, all my photographs are the results of great team effort. 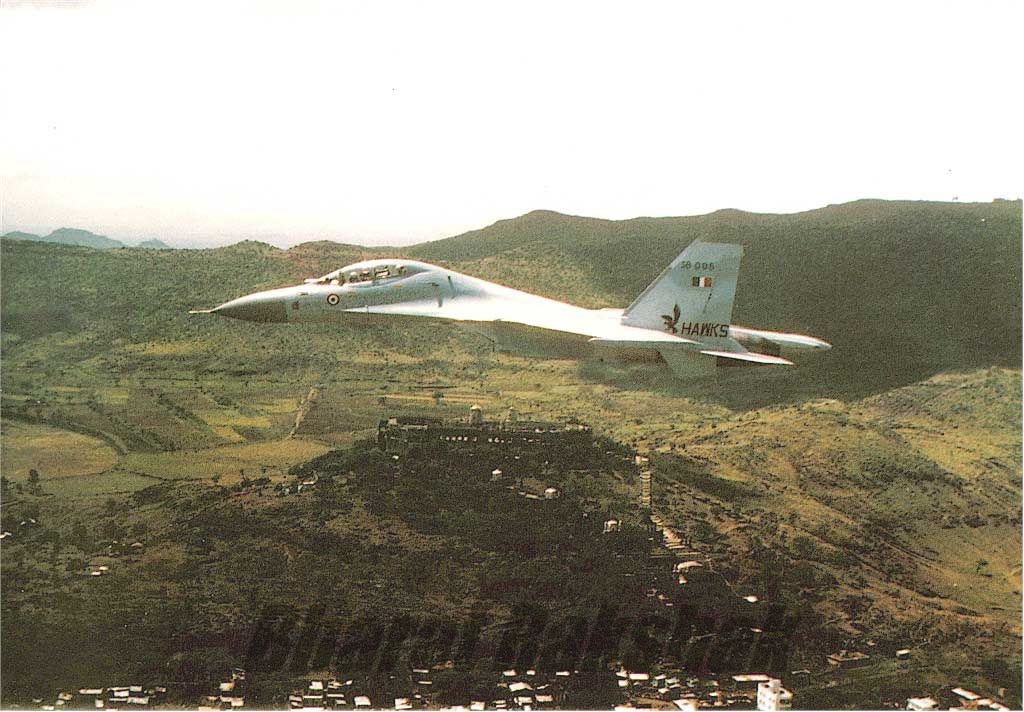 These photographs record the mystical moments, in the enchanting skies, experienced by all of us in the IAF, especially the aircrew and ground crew. For these moments of magic and mystery, which are, indeed, the most precious possessions of my life, I am grateful to the then Director of Intelligence and currently our Chief of the Air Staff, Air Chief Marshal S.K. Sareen PVSM, AVSM, VM, ADC and our Vice Chief of Air Staff, Air Marshal A.Y. Tipnis PVSM, AVSM, VM, ADC for initiating and encouraging me in aviation photography. I must say that God and both of them have been very kind, magnanimous and generous. For all those who love flying and photography, I can only say God-speed and happy landings.

(Commissioned in October 1965 in the transport stream of Flying Branch, Wg. Cdr. A.P. Mote is an ace aviation photographer. He is also an accomplished writer whose articles appear in English and vernacular press. In addition. his collected stories have been published in Marathi and Kannada.)