Few people realize that flying began in India as early as 1910, not many years after the pioneer flights of Orville and Wilbur Wright in America. During the last war several Indians joined the Royal Flying Corps, one of them being awarded the D.F.C. It was the nephew of this pioneer Indian pilot, who was among the first six cadets to join the Indian Air Force twelve years later and who subsequently became the first Indian Commander of its first squadron.

From 1919 until 1933 the air defence of India was entrusted to a few squadrons of the Royal Air Force which served with conspicuous success on the North West Frontier. Many will remember the historic evacuation from Kabul of nearly 800 civilians of all nationalities, including Italians and Germans, carried out by No. 70 Squadron at the end of 1928 and the beginning of 1929.

The foundations of the Indian Air Force were laid by the recommendations of a famous Government Commission, which included amongst its members such wellknown names in Indian public affairs as Mr. Motilal Nehru and Mr. M. A. Jinnah.

On the 1st of April 1927, the Skeene Committee made recommendations which led to the formation of an Indian Air Force and suggested that, in the early stages, its pilots be trained at Cranwell. It was not, however, until five years later, in 1932, that the Indian Air Force became a separate service under an Act of the Legislative Assembly.

The birth of a new enterprise is usually attended by scepticism and doubt, except among a few enthusiasts who have vision and courage. Such enthusiasts were the members of Sir Andrew Skeene's Committee, men with experience of  the world and with careers of distinction in many walks of life behind them. They sat round the council table in Simla and their deliberations, their wise counsel and their splendid forethought could picture what few others in high places at that time were able to see, an Air Force of many squadrons, officered by Indians, maintained by Indians, and earning through out the Commonwealth that same respect which the Indian Army has earned from its brothers-in-arms.

But the forethought and judgment of these public men would have been of no avail without the enthusiasm of the six young men who were the first Indian cadets to be trained at Cranwell. Sirkar, Mukerji, Bhupendra Singh, Awan, Amarjit Singh and Tandon left India for England in 1930. Apart from " Aspy " Engineer, who followed them a few months later, none of these young men had been to England before, and the adventure before them was a hundred times more dramatic and momentous than the journey of any R.A.F. cadet from his home in England to the Air Force College at Cranwell. These six young Indians were not only starting a new life in a new country but they were laying the foundations of a new Air Force : an Air Force which existed on paper alone and which many believed would never materialize into the complex organization of men, aeroplanes and equipment, which goes to make up a modern army of the air. These six Indian cadets were among the pick of sportsmen and quickly made their name at Cranwell. Sirkar captained the Hockey Team in which Awan, Amarjit Singh and Mukerji also played, while Amarjit Singh captained the Tennis Team in which two of the others also played. 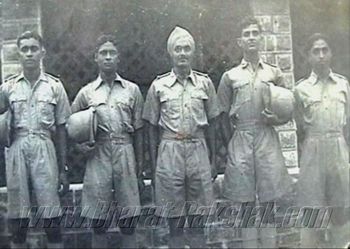 Among the most interesting of the early cadets was Engineer who is now a Wing Commander, D.F.C., and who in 1930 was the only one of the pioneers with previous flying experience. He had flown from India to England and back in a Tiger Moth. For this flight he won the Aga Khan prize awarded to the first Indian to fly from India to England. This was no mean feat in those days and the many pilots, who have flown Tiger Moths during their initial training in this war, will be the first to recognize that a cross-country flight of 5,000 miles in a light aircraft, including a hop over the Mediterranean, is something of which to be proud.

An amusing incident of that early flight is not without its topical interest, in view of the use of Sicily as a base for the Luftwaffe attacks on our convoys in the Mediterranean and our positions in North Africa. Engineer was delayed with engine trouble at Cantania aerodrome in Sicily. While he was waiting on the tarmac, a portentous procession of military big-wigs approached the hangar, in front of which a beautifully polished aircraft had been drawn up ready for flight. The procession was headed by the Station Commander who was assisted into his flying suit by a retinue of obsequious mechanics. This little ceremony complete, the C.O. hopped daintly into his aircraft and roared impressively to the mechanics : " Contacto." Nothing happened. Several times the C.O. repeated his peremptory order, but the " fan " obstinately refused to come to life. Finally, the C.O. jumped out of his aircraft and insisted on the cowling being removed. Where the carburettor should have been there was a gaping void. Evidently the ground crew had rushed the last inspection.

Apart from their outstanding success at games the six cadets entered fully into the busy routine of the Air Force " Sandhurst." They had their adventures. Engineer figured prominently, particularly when he had to bale out with his aircraft on fire while he was practising aerobatics. To their other achievements, therefore, these young men' were also able to add a Caterpillar badge. When their course was over Engineer was awarded the Grove's Memorial prize for the best all-round pilot of his term.

" Tich " Tandon, 4 ft. l0 in. high, was taken off flying when it was discovered that he was unable to reach the rudderbar. He had made excellent progress in flying but on his last instructional flight, before going solo, he was taxiing across the aerodrome when a gust of wind caused his aircraft to swing. He was not quick enough in correcting and was " torn off a stripe " by his instructor  His reply considerably shook latter. " How do you expect me to put on opposite rudder when I can't even reach it," and so " Tich " was grounded and transferred to the equipment branch.

Other cadets from India soon followed the first batch. Their names are now well known in the short but gallant history of the Indian Air Force. Majumdar, who commanded No. 1 Squadron in Burma where he won the D.F.C., Henry Runganadhan, who was killed a few weeks ago, Prithipal Singh, Narendra, " Bulbul" Khan, Mehar Singh, Arjun Singh, Ravinder Singh, Goyal, they all passed through Cranwell and, on their return to India , were posted to No.I Squadron, Indian Air Force. There they dedicated themselves to several years of hard training and operations on the North West Frontier of India, determined to prove to the critics that India could produce an Air Force in every way as qualified to fight as the Indian Army.

While these young men from Bombay, Calcutta, Peshawar, Allahabad, Lahore and many other cities of India were receiving training in England, letters and minutes were passing back and forth between the Government of India and the Air Ministry in England. There were many suggestions, some of which were strongly pressed, urging the inclusion of the new Air Arm within the organization of the Indian Army. These proposals were strongly opposed by Air Vice-Marshal Salmond who  was Air Officer Commanding in India at the time. Consequently, the machinery of legislation was set in motion and in 1932 the Indian Air Force Act, constituting the I.A.F. as a separate Service, was passed through the Legislative Assembly in Delhi.

On the 1st of April 1933, nearly ten years ago, the I.A.F. started with one flight at Karachi. It was commanded by Flt Lt. Bouchier (now an Air Commodore in Fighter Command) and included a British Flying Officer and a number of British N.C.Os. since one of the greatest difficulties in connection with the expansion of the I.A.F., then, as now, was the supply of technical tradesmen. The flight was trained as an Army Co-operation Unit and, in fact, all the pilots, after completing their course  of instruction at Cranwell, had passed through the Army Co-operation School at Old Sarum in Wiltshire. All the cadets are, therefore, steeped in the best traditions of the R.A.F. Not only had  they absorbed the atmosphere of Cranwell, but they knew " The Haunch of Venison," the famous hostelry in Salisbury, a well-known haunt of the " regulars " of the R.A.F.

In summing up the early days, the most striking feature of India's Air Force was the newness of the idea. In 1930, the aerial power of the Commonwealth was at its lowest ebb. England, which in 1918 had possessed 20,000 aircraft, had allowed her strength to dwindle to a force of little more than 500 front-line machines. In Canada, Australia, South Africa there were " token " Air Forces, while New Zealand did not a few years before possess an Air Arm until the war.

In India, where the Army had for so long dominated the defence services and where the R.A.F. itself operated on a very small scale, the formation of a separate service, which it was intended should be officered and manned entirely by Indians, was a revolutionary decision.

It is fitting that after ten years the Force, which started with six men and a flight of four aeroplanes, should have increased to its present strength and have justified the courage and foresight of the statesmen who sponsored its formation and the keenness of the young men who flew its first aeroplanes.

There have been many setbacks, but there have been many glorious incidents. Pilots of the Indian Air Force have captained Stirlings in raids over Germany and German occupied Europe. For three years.they have carried out anti-submarine patrols and convoy escorts in obsolete aircraft around the shores of India, and during the Burma campaign they earned a high reputation among the Commonwealth Air Forces for their discipline and initiative.