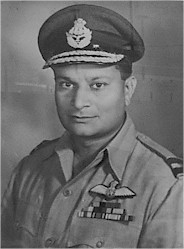 Air Vice-Marshal Ranjan Dutt, one of a small number of Indian pilots to have flown operationally in Europe during World War II, passed away in Chennai on 13 August 2009. He was 87.

A swashbuckling archetypal fighter pilot, AVM Dutt flew a number of iconic World War II aircraft types, flew from a number of equally iconic RAF bases, served in Burma and Kashmir, and went on to senior positions in the post-Independence Indian Air Force. During his career, he encountered and worked with aviation figures such as Douglas Bader, Roland Beamont, and Kurt Tank, and with public figures such as Jawaharlal Nehru, VK Krishna Menon and Alexei Kosygin. He was probably the first Indian to fly jets, and among the first to break the sound barrier.

Ranjan Dutt was born in 1922. He schooled at the Prince of Wales’s Royal Indian Military College (now the Rashtriya Indian Military College), in Dehra Dun, the alma mater of numerous distinguished Indian and Pakistani military figures. He learned flying privately while still a schoolboy, and received his "A" licence at the age of 16.

He was commissioned on 1st August 1940, into the 4th Pilots’ Course, of the Indian Air Force – he had overstated his age by a year to join up. He was one of 24 newly-commissioned Indian officers who were immediately seconded to the Royal Air Force and sent to Great Britain that year, for supplementary RAF training and RAF squadron service.

Ranjan Dutt was one of three Indian pilots to serve with 32 Squadron RAF (the same squadron as RAF aces Pete Brothers and Bob Stanford-Tuck), flying Hawker Hurricanes, from mid-1941 onwards. The early part of this period would have been in a defensive role; however the squadron is known to have served in an offensive role over France later during this period, carrying out daylight sweeps over France and the Dutch coast, and escorting bombers.

Dutt also served for a short period with 94 Squadron RAF in the Middle East. He then returned to India.

On returning to India in 1942, He was then posted to 4 Squadron of the Indian Air Force at Kohat, on Frontier watch-and-ward duties, flying the Westland Lysander. Later he served as one of the first Indian instructors at 151 OTU in Risalpur.

In early 1944 he went to Burma, serving initially with No.20 Squadron (RAF) in the Arakan. He went with a small detachment to Imphal during the decisive land battle there; flying alongside No 1 Squadron of the IAF, commanded at the time by Squadron Leader (now Marshal of the Indian Air Force) Arjan Singh. He also served with No 10 Squadron of the IAF; flying Hurricanes with all these units.

In April 1945 Ranjan Dutt was one of the first Indians selected for the prestigious Day Fighter Leaders Course in England. This course, similar to modern-day Top Gun courses, was at RAF Tangmere, where a Tactics section had been established, headed by Douglas Bader, the legless RAF ace. The DFL course was conducted on Supermarine Spitfires. Dutt completed it with distinction, and received some informal gestures of recognition from Douglas Bader.

Tangmere at this time also hosted an Enemy Aircraft Flight, which tested captured German aircraft, and a High Speed Flight, which was experimenting with early British jets. Dutt made good use of this proximity, and flew an early version of the Gloster Meteor jet fighter. He also flew a captured German Focke-Wulf Fw-190 and Messerschmitt Me-109. He described the FW-190 as a "wonderful aircraft" – twenty years later, in a fly-on-the-wall moment for aviation historians, he would discuss its design in detail with Dr Kurt Tank, its designer, in Bangalore.

In August 1945, Ranjan Dutt was posted to 8 Squadron, the IAF’s first Spitfire-operating squadron, as a Flight Commander. He institutionalized many of the tactics he had learned at Tangmere, and helped convert the squadron to the later Spitfire XIV variant.

In March 1946, promoted to Squadron Leader, Ranjan Dutt took command of No 1 Squadron in Quetta.

This was the period of the RIN mutiny, and other strains between the departing British and the Indians. Dutt stood up for the Indian point of view in a number of controversies at the time, and was subjected to some trials by a vindictive British officer. However, he remained un-embittered, and personally friendly with many British officers, though with his nationalism undiminished.

On Independence No 1 Squadron was allocated to Pakistan, and he was left to find his way back to India.

Shortly before Independence Ranjan Dutt chose to drive himself out of Pakistan into India, in his own open-top sports car. It was a dangerous period to be driving through Punjab – there were "dead bodies everywhere", he recalled. By a mix of confidence, bluff, and the happenstance that the RIAF uniform he was wearing was identical to that worn by the new RPAF’s officers, he made it safely to India, although not without driving through a police barrier and shooting his way through a mob.

After reaching India, he was asked by Air HQ to return to Pakistan, and escort a group of Indian airmen and their families back to India on a special train. Trains had been a frequent target for massacres, and Dutt had been warned by an RAF officer of intelligence that his train was to be attacked. He used his old RIMC connections to have the men issued with sten guns, and spent the entire journey in the engine-cab, encouraging the clearly hostile driver and fireman along by a judicious display of his personal sidearm – a 9mm Luger.

During the Kashmir operations of 1947-48, Ranjan Dutt served as the SASO of the IAF’s sole Operational Group.

He planned, and personally flew, several attacks on the Kishenganga Bridge, a key, and heavily-defended, chokepoint. On his third such attack he scored a direct hit on the bridge. His Hawker Tempest aircraft was heavily shot up, but he nursed it back to Jammu. When he landed, Lt Col (later Maj Gen) Zorawar "Zoru" Singh, MC (another RIMC alumnus), is said to have taken one look, burst out, "My God!!" and authorized the immediate issue of a round of brandy.

Ranjan Dutt was decorated with the Vir Chakra, for his services during the 1947-48 operations – in the young IAF of that time, many officers in staff positions (including the AOC of No 1 Operational Group, Air Commodore Mehar Singh) flew personally on operations, and Dutt was one of four such officers to receive gallantry decorations.

He became a Group Captain in 1948 at the age of 26, probably the youngest in the world.

Between 1951 and 1954 Ranjan Dutt twice commanded No 1 Air Force Academy, initially at Ambala, and later, following its move south, at Begumpet.

In 1952, he attended the RAF Staff College at Andover. Again by all accounts he distinguished himself, but not without argument. The subject of his thesis was "Commonwealth Defence", a much-cherished concept in the UK at the time as the British Empire shrank; Dutt debunked the concept, as being aimed primarily at the defence of Australia, Canada, and New Zealand; and not of India – despite all that India had done for the defence of the Commonwealth.

Promoted to Air Commodore, he served as Director Operations, then as Air Officer in Charge Policy & Plans.

Ranjan Dutt was promoted to Air Vice-Marshal, at a time when there were only about six posts of that rank in the entire Air Force, at the age of 37 – again, he was probably the youngest holder of this rank in the Commonwealth, if not the world. From March 1959 to March 1961, he served as AOC-in-C Training Command. In 1961 he went on deputation to Hindustan Aircraft (as it was then) Limited as Managing Director. While MD, he personally flew HAL’s flagship product of the time, the Kurt Tank-designed, Orpheus-engined HF-24 Marut indigenous fighter. He was probably unique in doing so, among HAL MDs!

He also supported a project, executed by Group Captain Jacob Chakko, to enhance the IAF’s Fairchild C-119G Packets’ high-altitude performance, by the installation of an additional jet engine – a remarkable innovation in support of the IAF’s un-heralded but demanding role of air maintenance among the world’s highest mountains.

During the IAF’s search for a supersonic interceptor, Dutt helped evaluate, and personally flew, the English Electric Lightning, the French Dassault Mirage III and the Russian Mikoyan-Gurevich MiG-21. Despite the lack of an on-board gun, and radar limitations (and despite his political views – he described himself later as a strong "free market" supporter), in India’s circumstances of the time, he clearly preferred, and successfully pushed for the MiG-21. Under his leadership Hindustan Aircraft metamorphosed into Hindustan Aeronautics Limited, and established a major licensed-manufacturing program, building over 450 MiG-21s in India.

Many years later Dutt remarked that he had his "own views" about the USSR, but there was no doubt that what they gave India in the MiG-21 manufacturing program took the country into a new league. In fact, the current success of India’s Su-30 program can be traced back to the decision to manufacture MiG-21s in India.

After leaving the service, Ranjan Dutt chose to withdraw from public view. He spent some years in retirement in Europe and returned to India around two years ago, to live out his time with his son in Chennai.