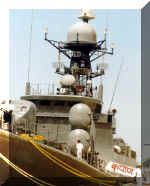 Structure: The plan was to give the Type 25 vessels an ASW role. INS Khukri, however, has neither torpedo tubes nor sonar (apart from an Atlas Elektronick echo sounder), so they rely on a helicopter which has dunking sonar, depth charges and ASW (Anti-Submarine Warfare) torpedoes. All these vessels have fin stabilizers and full air conditioning.

Helicopter Capacity: Has a helicopter pad in the aft of the vessel, which carries the HAL Chetak. To be replaced by the Naval ALH in due course.

Comments: These vessels were intended to replace the ageing Petya II Class corvettes. The first two were ordered in December 1984 and two in 1985. The diesel engines are assembled in India, under license by Kirloskar. Around 65% of the ship contains indigenous content.